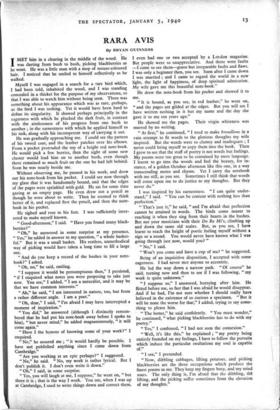 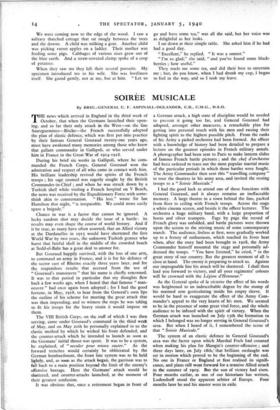 IMET him in a clearing in the middle of the wood. He was darting from bush to bush, picking blackberries as he went. He was a little man with a mop of mouse-coloured hair. I noticed that he smiled to himself reflectively as he walked.

Myself I was engaged in a search for a rare bird which, I had been told, inhabited the wood, and I was standing concealed in a thicket for the purpose of my observations, so that I was able to watch him without being seen. There was something about his appearance which was as rare, perhaps, as the bird I was seeking. Yet it would have been hard to define its singularity. It showed perhaps principally in the eagerness with which he plucked the dark fruit, in contrast with the aimlessness of his progress from one bush to another ; in the earnestness with which he applied himself to his task, along with his incompetent way of carrying it out.

He was gradually approaching me. I could see the pattern of his tweed coat, and the leather patches over his elbows. From a pocket protruded the top of a bright red note-book. He would pick a few berries, then the sight of some new cluster would lead him on to another bush, even though there remained as much fruit on the one he had left behind. Soon he was nearly beside me.

Without observing me, he paused in his work, and drew out his note-book from his pocket. I could see now through my glass that it was handsomely bound, and that the edges of the pages were sprinkled with gold. He sat for some time gazing at an empty page. He even drew out a pencil as though he were about to write. Then he seemed to think better of it, and replaced first the pencil, and then the note- book in his pocket.

He sighed and rose to his feet. I was sufficiently inter- ested to make myself known.

" Good-afternoon," I said. " Have you found many black- berries?"

"Oh," he answered in some surprise at my presence. " Yes," he added in answer to my question, " a whole basket- ful." But it was a small basket. His restless, unmethodical way of picking would have taken a long time to fill a large one.

" And do you keep a record of the bushes in your note- book?" I asked.

" I suppose it would be presumptuous then," I persisted, " if I enquired what notes you were proposing to take just now. You see," I added, " I am a naturalist, and it may be that we have common interests."

" Oh, dear," I said, " I'm afraid I may have interrupted a moment of inspiration."

" You did," he answered (although I distinctly remem- bered that he had put his note-book away before I spoke to him), " but never mind," he added magnanimously, " it will come again."

" Have I the honour of knowing some of your work?" I enquired.

" No," he assured me ; " it would hardly be possible. I have not published anything since I came down from Cambridge."

" Are you working at an epic perhaps?" I suggested.

" Yes, you will laugh at me, I suppose," he went on, " but there it is ; that is the way I work. You see, when I was up at Cambridge, I used to write things down and correct them. I even had one or two accepted by a London magazine. But people were so unappreciative. And there were faults —I came to see them—grave but irreparable faults and flaws. I was only a beginner then, you see. Soon after I came down I was married ; and I came to regard the world in a new light, the light of happiness, of deep spiritual admiration. My wife gave me this beautiful note-book."

He drew the note-book from his pocket and showed it to me.

" It is bound, as you see, in red leather," he went on, " and the pages are gilded at the edges. But you will see I have written nothing in it but my name and the day she gave it to me ten years ago."

He showed me the pages. Their virgin whiteness was marred by no writing.

" At first," he continued, " I used to make brouillons in a vain attempt to fit words to the glorious thoughts my wife inspired. But the words were so clumsy and inadequate ; I never could bring myself to copy them into the book. Then I grew to see that the stuff of poetry is not words but feelings. My poems were too great to be contained by mere language. I learnt to go into the woods and feel the beauty, for in- stance, of a golden October afternoon like this one, in a way transcending metre and rhyme. Yet I carry the notebook with me still, as you see. Sometimes I still think that words will come upon me to do justice to my thoughts. But they never do."

I was inspired by his earnestness. " I can quite under- stand," I said. " You can be content with nothing less than perfection."

" That's just it," he said, " and I'm afraid that perfection cannot be attained in words. The birds come nearer to reaching it when they sing from their hearts in the bushes. But not your musicians with their Do Re Mi's, climbing up and down the same old scales. But, as you see, I have learnt to reach the height of poetic feeling myself without a sign or a sound. You would never have known what I was going through just now, would you? "

" Won't you come and have a cup of tea? " he suggested. Being of an inquisitive disposition, I accepted with some eagerness. I had never met anyone so eccentric.

He led the way down a narrow path. " Of course" he said, turning now and then to see if I was following, " my work is quite unknown."

" I suppose so," I answered, hurrying after him. He flitted before me, so fast that I was afraid he would disappear. And if he had, I'm not sure whether I should really have believed in the existence of so curious a specimen. "But it will be none the worse for that," I added, trying to say some- thing to please him.

" The better," he said confidently. " You must wonder," he continued, " what picking blackberries has to do with my poetry."

" Well, it's like this," he explained ; " my poetry being entirely founded on my feelings, I have to follow the pursuits which induce the particular exultations my soul is capable of."

" Now, dibbling cabbages, lifting potatoes, and picking blackberries are the three occupations which produce the finest poems in me. They keep my fingers busy, and my mind soars. The only thing is, I'm afraid that the dibbling, tilt lifting, and the picking suffer sometimes from the elevation of my thoughts." We were coming now to the edge of the wood. I saw a solitary thatched cottage that sat snugly betweea the trees and the downs. A child was milking a goat. Another child was picking russet apples on a ladder. Their mother was feeding some pigs. Cabbages of various sizes grew out of the blue earth. And a straw-covered clamp spoke of a crop of potatoes.

When they saw me they left their several pursuits. My specimen introduced me to his wife. She was loveliness itself. She gazed gently, not at me, but at him. " Let us go and have some tea," was all she said, but her voice was as delightful as her looks.

I sat down at their simple table. She asked him if he had had a good day.

They made me some tea, and did their best to entertain me ; but, do you know, when I had drunk my cup, I began to feel in the way, and so I took my leave.