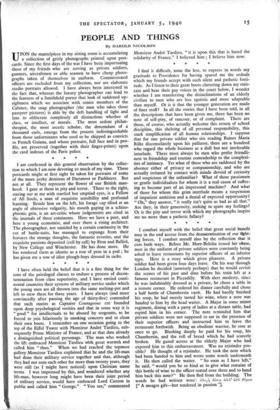 I have often held the belief that it is a

fine thing for the sons of the privileged classes to endure a process of decon- tamination from class superiority, and I have envied conti- nental countries their systems of military service under which the young men are all thrown into the same melting-pot and left to stew there for three years. I have always (and more convincedly after passing the age of thirty-five) contended that such stories as Captains Courageous ere founded upon deep psychological verities and that in some way it is tt good " for intellectuals to be abused by sergeants, to be forced to join hilariously in smoking concerts and to clean their own boots. I remember on one occasion going to the top of the Eiffel Tower with Monsieur Andre Tardieu, sub- sequently Prime Minister of France, and at that date already a distinguished political personage. The man who worked the lift embraced Monsieur Tardieu with great warmth and called him " thou." When we had reached the topmost gallery Monsieur Tardieu explained that he and the lift-man had done their military service together and that, although they had not seen each other for more than twenty years, they were still (as I might have noticed) upon Christian name terms. I was impressed by this, and wondered whether any lift-man, however long might have been their joint period of military service, would have embraced Lord Curzon in public and called him " George." " You see," commented Monsieur Andre Tardieu, " it is upon this that is based the solidarity of France." I believed him ; I believe him now.