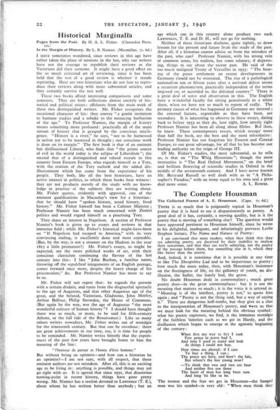 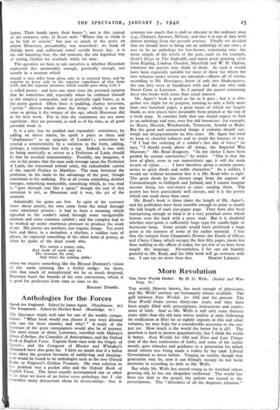 THERE is so much that is poignantly topical in Housman's poetry that it is hard to see it dispassionately as poetry. A great deal of it has, certainly, a moving quality, but is it the poetry that is moving ot something else? The question would have appeared pertinent to Housman himself, since he wrote in his delightful, inadequate, and infuriatingly perverse Leslie Stephen lecture, The Name and Nature of Poetry:

I am convinced that most readers, when they think that they are admiring poetry, are deceived by their inability to analyse their sensations, and that they are really admiring, not the poetry of the passage before them, but something else in it, which they like better than the poetry.

And, indeed, it is notorious that it is possible at any time

to like The Shropshire Lad and to be impervious to poetry ; how much the more today, then, with Housman's insistence on the fleetingness of life, on the gallantry of youth, cn dis- illusion, the bullet, the lonely bed, the grave.

No doubt Housman dealt in commonplace ; muclt great poetry does—in the great commonplaces : but it is not the meaning that matters so much ; it is the voice it is uttered in. " Meaning is of the intellect, poetry is not," to quote him again ; and " Poetry is not the thing said, but a way of saying it." These are dangerous half-truths, but they give us a clue to the interpretation of Housman's poetry, and wiirn us that we must look for the meaning behind the obvious symbol : what his poetry expresses, we find, is the imlnense nostalgia of the faithless 'nineties such as we get in Hardy, and the disillusion which began to emerge at the agnostic beginning of the century : When first my way to fair I took Few pence in purse had I, And long I used to stand and look At things I could not buy.

Now times are altered: if I care To buy a thing, I can ; The pence are here, and here" the fair, But where's the lost young man?

The heart of man has long been sore And long 'tis like to be.

The tremor and the fear we get in Housman—the hanged man was his symbol—is very old : " When men think they fasten, Their hands upon their hearts "; nor is this typical of the romantic only, of Keats with " Where but to think is to be full of sorrow," but just as much of the poets on whom Housman, presumably, was nourished : we think of

of saying, Gather we rosebuds while we may.

The question we have to ask ourselves is whether Housman expressed this memorably enough, poetically enough, not merely in a manner which though it may differ from prose only in its external form, and be superior to prose only in the superior comeliness of that form itself, and the superior terseness which usually goes along with it is called poetry : and here one must state the personal opinion that he sometimes did, especially when he confined himself to the simplest vernacular, and to perfectly rigid forms, as in the poem quoted. Often there is padding, clumsy inversion, " poetic " diction which dates the thing: which is not the same as giving it the temper of the age, which Housman did in his best work. For in him the sentiments are not mere repetition they are personal, as well as of his time, as all good persmial work is.

It is a pity that he padded and expanded : sometimes, by adding an otiose stanza, he spoilt a piece as clean and " diaphanous " as an epigram of Landor's ; sometimes he created a sentimentality by a variation in the form, adding, perhaps, a redundant line with a tag. Indeed, it was only by being metrically as severe as a Professor of Latin should be that he avoided sentimentality. Possibly, one imagines, it was in his poems that the man took revenge upon the Professor of Latin, the renowned textual critic, the redoubtable satirist

of the superb Preface to Manilius. The man betrayed the professor, in the main to the advantage of the poet, though

sometimes to his undoing. For at all events something distinct emerges, something memorable, something which, as you read it, " goes through you like a spear," though the seat of this sensation is not, as Housman said it was, the pit of the stomach.

Admittedly the gems are few. In spite of his contrary views about poetry, his own came from the mind through some emotional process : it had to have a meaning which appealed to the reader's mind through some recognisable emotion and some common symbol ; and the complex had to be worked up under enormous pressure to produce the work of art. His poems are artefacts, not organic things. Yet every here and there, in a metaphor, a rhythm, a sudden turn of phrase, he captured something of the other kind of poetry, as when he spoke of the dead youth who

Has woven a winter robe, And made of earth and sea His overcoat for ever,

And wears the turning globe: where we receive something like the Blessed Damozel's vision of the earth spinning like a fretful midge : for there, with that touch of metaphysical wit he so much despised, Housman burst the bounds of his own convictions, which it is good for professors from time to time to do.