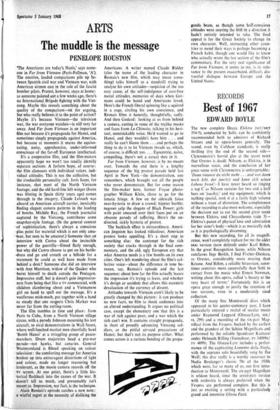 The muddle is the message ARTS

The Americans are today's Nazis,' says some- one in Far from Vietnam (Paris-Pullman, 'A'). The emotive, loaded comparisons pile up be- tween Spanish civil war and Vietnam war, with American airmen cast in the role of the fascist bomber pilots. Protest, however, stays at home: as someone pointed out a few weeks ago, there's no International Brigade fighting with the Viet- cong. Maybe this reveals something about the quality of the comparison—ox for arguing, but who really believes it to the point of action? Maybe it's because Vietnam—the television war, the war everyone watches—is still very far away. And Far from Vietnam is an important film not because it's propaganda for Hanoi, and sometimes simply propaganda against America, but because at moments it snares the equivo- cating, noisy, apprehensive, under-informed conscience of the far-off European intellectuaL

It's a cooperative film, and the film-makers apparently hope we won't too readily identify separate sections. A forlorn hope, of course: the film clamours with individual voices, indi- vidual attitudes. This is not the collective, but the irreducible personality cult. Joris Ivens, for instance, shot most of the North Vietnam footage; and the old hard-line left winger (Ivens was filming in Spain thirty years ago) comes through in • the imagery. Claude Lelouch was aboard an American aircraft carrier, inevitably finding elegant camera patterns in the loading of bombs. Michele Ray, the French journalist captured by the Vietcong; contributes some snapshot-style footage. (In the general context 'of sophistication, there's always a conscious plus point for material which is not only ama- teur, but seen to be amateur.) Someone shot an interview with Castro about the invincible power of the guerrilla—filmed flatly enough, .but why did Castro choose to put on his battle- -dress and go and crouch on a hillside for a statement he could as well have made from behind a desk? Someone else did an interview with Ann Morrison, widow of the Quaker who burnt himself to death outside the Pentagon. Impressive stuff, but it doesn't gain impressive- ness from being shot like a TV commercial, with children clambering about and a Vietnamese girl on hand to spell out the message. It's a vociferous mish-mash, put together with a hand so steady that one susgects Chris Marker was never far from the cutting-room.

The film rambles in time and place: from Paris to Cuba, from a North Vietnam village circus, with a parody Johnson mourning bis Jost aircraft, to rival demonstrations in Wall Street, where well-lunched market men cheerfully bawl `Bomb Hanoi' at a straggling group of peace- marchers. Drum majorettes head a pro-war parade--not hawks, but canaries. General Westmoreland is filmed speaking on colour television: the comforting message for America broken up into extravagant distortions of light and colour, made no longer reassuring but irrelevant, as the movie camera records off the TV screen. At one point, there's a little his- torical flashback into the causes of the war. It doesn't tell us much, and presumably isn't meant to. Impression, not fact, is the technique.

Alain Resnais's episode catches a new note: a wistful regret at the necessity of disliking the Americans. A writer named Claude Ridder (also the name of the leading character in Resnais's new film, which may mean some- thing) talks himself to a standstill trying to analyse his own attitudes—suspicion of the too easy cause, of the self-indulgence of cost-free moral attitudes, memories of days when Ger- mans could be hated and Americans loved. Here's the French liberal spinning like a squirrel in a cage, circling his own conscience, and Resnais films it honestly, thoughtfully, sadly. And then Godard: looking at us from behind a camera, cutting in some of the toylike masks and faces from La Chinoise, talking in his hesi- tant, unmistakable voice. He'd wanted to go to Hanoi, and they wouldn't have him . . . and really he can't blame them .. . and perhaps the thing to do is to let Vietnam invade us, which, of course, is difficult too.... Egocentric, naive, compelling, there's not a casual shot in it.

Far from Vietnam, however, is by no means over. Towards the end there is a lengthy sequence of the big protest parade held last April in New York—the demonstration, one remembers, which brought out all the people who never demonstrate. But for some reason the film-maker here, former Vogue photo- grapher William Klein, chose to go for the lunatic fringe. A Jew on the sidewalk fakes near-hysteria to draw 'a crowd; hippies burble; negroes yelp the slogans of Black Power; girls with paint smeared over their faces 'put on an obscene parody of suffering. Here's the un- directed, sickly hysteria of protest.

The backlash effect is extraordinary. Ameri- can jingoism has looked ridiculous; American protest looks appalling. It's a short step to something else: the contempt for the rich society that cracks through in the final com- mentary, and the old, ugly European cry that what America needs is a few bombs on its own cities. One's left wondering about the film's col- lective voice—about the difference in tone be- tween, say, Resnais's episode and the last sequence; about how far the film actually leaves the impression it's trying to leave, and whether it's design or accident that allows this eccentric devaluation of the currency of dissent.

.Attitudes towards Vietnam aren't likely to be greatly changed by this picture: it can produce no new facts, no film to shock audiences into an altered understanding. It argues no political case, except the elementary one that this is a war of rich against poor, and a war which the rich can't win. It contains straight propaganda, in shots of proudly advancing Vietcong sol- diers, or the pitiful air-raid precautions of Hanoi; but that's not its purpose either. What comes across is a curious bending of the propa- ganda beam, as though some half-conscious attitudes were steering the filni in a direction it hadn't entirely intended to take. The final appeal is for the Great Society to change its own character. Well, instructing other coun- tries to mend their ways is perhaps becoming a French habit, though one would like to know who actually wrote the last section of the film's commentary. For the very real significance of Far from Vietnam. it seems to me, is its rele- vance to the present exacerbated, difficult, dis- trustful dialogue between Europe and the United States.