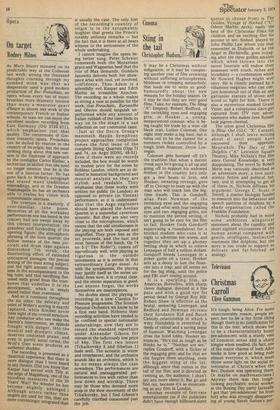 Sting in the tail

It may be a Christmas without indigestion, or it may be completing another year of film reviewing without suffering schizophrenia, blindness or creeping melancholy, that leads me to write so goodhumouredly about the new releases for the holiday season. Or it may be that they are very good films. Take, for example, The Sting "A" Empire). Robert Redford, of the twinkling eyes and engaging grin, is Hooker, a young, inexperienced conman who is being taught his trade by a wise old black man, Luther Coleman. One night they make a big haul, but it turns out to be the runner for a numbers racket controlled by a tough Irish financier, Doyle Lonnegan.

Coleman gets bumped off (it's the tradition that when a decent crook says he's giving it all up and going off to support his widowed mother in the country he's only got a few hours to live), and Hooker, swearing revenge, goes off to Chicago to team up with the man who will teach him the bigtime frauds. This is Gondorff, alias Paul Newman of the twinkling eyes and the engaging grin, and what with four twinkling eyes and two engaging grins, not to mention the period setting, it isn't going to be easy for the film to fail. Hooker finds Gondorff supervising a roundabout for a brothel madam who runs it at night to advertise her wares, and together they set up a phoney betting shop in which to relieve Lonnegan of half a million dollars. Gondorff bleeds Lonnegan in a poker game on a train; Hooker acts as a decoy to lure the financier into a trap; and all seems set for the big sting, until the police and FBI start nosing around.

It is a sparkling film, an American Borsalino, with sharp, clever dialogue, directed at a fine pace and with a good eye for period detail by George Roy Hill. Robert Shaw is effective as the brutal, menacing Lonnegan, and Redford and Newman recreate their Sundance Kid and Butch Cassidy relationship in which a wary friendship is cemented by deeds of valour and a saving sense of humour. Watching Lonnegan cross the hotel lobby, Hooker announces, "He's not as tough as he thinks he is." "Neither are we," replies Gondorff, with a flicker of th,e engaging grin; and for that we can forgive them anything, even the biggest sting of the lot, although since that comes in the tail of the film, and is directed as conning us, the audience, I shan't say any more about it. But go and find out, because it's as entertaining as any film in London. Another example of first-rate entertainment (as if the publicists didn't have enough billboard-sized quotes to choose from) is The Golden Voyage of Sinbad ("U" Odeon Marble Arch), easily the best of the Christmas films for children and an exciting film for anyone to see. Sinbad, played by John Phillip Law whom you may remember as Diabolik or as the Angel in Barbarella, goes voyaging after the three golden amulets which, when thrown into the secret fountain will endow their possessor with youth, riches and invisibility — a combination which Mr Howard Hughes might well envy. He is closely pursued by a

villainous magician who can con

jure homunculi out of thin air and galvanise statues of stone and wood to fight for him. There is also a mysterious masked Grand Vizier, and a voluptuous slave-girl

although I shall leave writing about it until people have recovered their appetites. Meanwhile The Day of the Dolphin ("A" Leicester Square Theatre), Mike Nichols's first film since Carnal Knowledge, is very diappointing. The novel by Robert Merle was variously described as an adventure story, a love story, science fiction and political fantasy, and in attempting to get all of these in, Nichols diffuses his argument. George C. Scott is Terrell, a marine biologist funded to research into the behaviour and speech patterns of dolphins by a shady organisation called the Franklin Foundation.

Nichols probably had in mind some ambitious allegorical statement about the cupidity and short-sighted viciousness of the human animal compared with gentle, intelligent, instinctive mammals like dolphins, but the story is too crude to support so delicate and far-fetched an analogy.