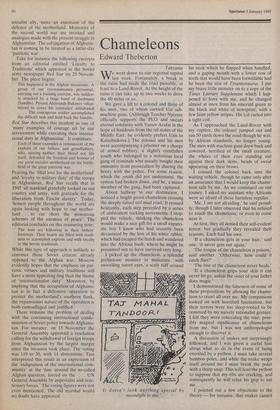 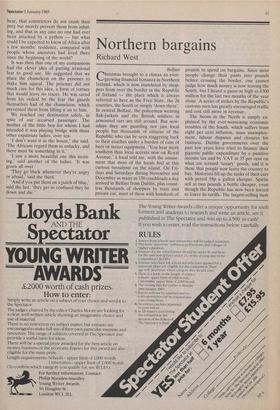 We went down to our regional capital last week. Fortunately, a break in the rains had made the road passable, at least to a Land-Rover. At the height of the rains it can take up to two weeks to drive the 60 miles or so.

We gave a lift to a colonel and three of his men, two of whom carried Uzi sub- machine guns. (Although Teacher Nyerere officially supports the PLO and swears eternal solidarity with Yasser Arafat in the hope of handouts from the oil states of the Middle East, he evidently prefers Uzis to Kalashnikovs.) The colonel and his men were accompanying a prisoner on a charge of armed robbery, a slightly crestfallen youth who belonged to a notorious local gang of criminals who usually bought their immunity from prosecution by sharing the booty with the police. For some reason, which the youth did not understand, the system had broken down, and he, a minor member of the gang, had been captured.

About halfway to our destination, I noticed a bright green chameleon crossing the deeply rutted red mud road. It crossed hesitantly, each step preceded by a series of ambivalent rocking movements. I stop- ped the vehicle, thinking the chameleon would make a nice gift for a small expatri- ate boy I knew who had recently been devastated by the loss of his white rabbit, which had escaped the hutch and wandered into the African bush, where he might be presumed not to have survived very long.

I picked up the chameleon, a splendid prehistoric monster in miniature, with swivelling turret eyes, a scaly ruff around 'Jr doesn't look anything special by moonlight to Me.' his neck which he flapped when handled, and a gaping mouth with a lower row of teeth that would have been formidable had he been the size of Tyrannosaurus. I put my brave little monster on to a copy of the Times Literary Supplement which I hap- pened to have with me, and he changed almost at once from his emerald green to the black and white of newsprint, with a few faint yellow stripes. His tail curled into a tight coil.

As I approached the Land-Rover with my captive, the colonel jumped out and ran 50 yards down the road though he was, by African standards, no longer young.

The men with machine guns drew back and cowered, terrified of the small creature, the whites of their eyes standing out against their dark skins, beads of sweat appearing on their brows.

I coaxed the colonel back into the waiting vehicle, though he came only after an assurance that I would keep the chame- leon safe by me. As we continued on our jouney, I asked my assistant why Africans were so afraid of these harmless reptiles.

`Me, I am not afraiding,' he said proud- ly, though I later observed that he refused to touch the chameleon, or even to come near it.

At first, they all denied their self-evident terror; but gradually they revealed their reasons. Each had his own.

'If a chameleon gets in your hair,' said one, 'it never gets out again.'

'The tongue of the chameleon is poison,' said another. 'Otherwise, how could it catch flies?'

'The bite of the chameleon never heals.'

'If a chameleon grips your skin it can never let go, unless the sister of your father does magic.'

I demonstrated the falseness of some of these propositions by allowing the chame- leon to crawl all over me. My companions looked on with horrified fascination, but their terrors were too deep-rooted to be removed by my naively rationalist gesture. I felt they were concealing the true, poss- ibly magical significance of chameleons from me, but I was not anthropologist enough to discover it.

A discussion of snakes not surprisingly followed, and I was given a useful hint about what to do in the event of being encoiled by a python. I must take several bamboo poles, and while the snake wraps itself around me I must break the poles with a sharp snap. This will lead the python to suppose that my ribs are cracking, and consequently he will relax his grip to eat me.

I pointed out a few objections to the theory — for instance, that snakes cannot hear, that constrictors do not crush their prey but merely prevent them from inhal- ing, and that in any case no one had ever been attacked by a python — but what could I be expected to know of Africa after a few months' residence, compared with people whose ancestors had lived there since the beginning of the world?

It was then that one of my companions had the clever idea of putting irrational fear to good use. He suggested that we place the chameleon on the prisoner to make him squeal. The prisoner did not much care for this idea, a form of torture that would leave no traces. He was saved from his ordeal by the fear the guards themselves had of the chameleon, which prevented them from lifting it on to him.

We reached our destination safely, in spite of our accursed passenger. The mother of the little boy for whom I had intended it was playing bridge with three other expatriate ladies, over tea.

'I don't want it in the house,' she said. The Africans regard them as unlucky, and there must be something in it.'

'I saw a more beautiful one this morn- ing,' said another of the ladies. 'It was green all over.'

'They go black whenever they're angry or afraid,' said the third.

'And if you put them on a patch of blue,' said the last, 'they get so confused they lie down and die.'