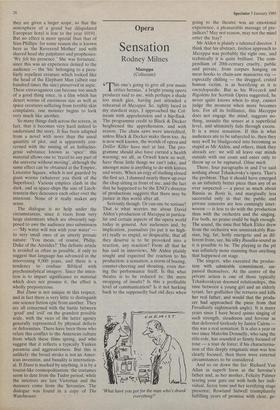 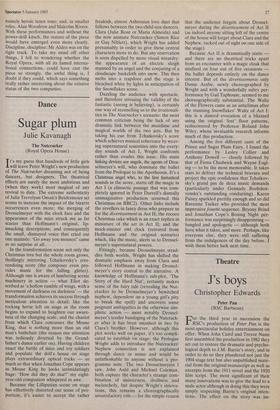 rr his one's going to give all you music

1 critics hernias,' a bright young opera producer said to me, with perhaps a shade too much glee, having just attended a rehearsal of Mazeppa. So, tightly laced in my sturdiest stays, I approached the Col- iseum with apprehension and a hip-flask. The programme credit to Black & Decker heightened the apprehension, and with reason. The chain saws were uncredited, unless Black & Decker make them too. As is now well known, the worlds of opera and Driller Killer have met at last. The pro- gramme should also have carried a health warning; we all, as Orwell knew so well, have those little things we can't take, and amongst mine is anything to do with knives and wrists. When an orgy of slashing closed the first act, I damned nearly threw up over the chap sitting in front of me, and the fact that he happened to be the ENO's director of productions suggests that there may be justice in this world after all.

Seriously though. Or can one be serious? That is what worries me about David Alden's production of Mazeppa in particu- lar and certain aspects of the opera world today in general. Are audiences and, by implication, journalists (to put it no high- er) really so stupid, so despicable, that all they deserve is to be provoked into a reaction, any reaction? From all that he has said in interviews, Mr Alden plainly sought and expected the reaction to his production: a sensation, a storm of booing, counter-cheering and shouting, even dur- ing the performance itself. Is this what theatre is to be reduced to, the mere swopping of insults? Is this a profitable level of communication? Is it not harking back to the supposedly bad old days when 'What have you got for the man who's drunk everything?'

going to the theatre was an emotional experience, a pleasurable massage of pre- judices? May not reason, may not the mind enter the fray?

Mr Alden is plainly a talented director. I think that his abstract, tireless approach to Mazeppa was probably the right one, and technically it is quite brilliant. The com- pendium of 20th-century cruelty, public and private, from corpses hanging on meat-hooks to chain-saw massacres via — especially chilling — the drugged, crated human victim, is as horrifying as it is encyclopaedic. But as his Wozzeck and Rigoletto for Scottish Opera suggested, he never quite knows when to stop, cannot judge the moment when more becomes less. For all its brilliance, this Mazeppa does not engage the mind, suggests no- thing, assaults the senses at a superficial level, and ultimately fails through excess. It is a mere sensation. If this is what audiences are to be subjected to, then they may well be bludgeoned into becoming as stupid as Mr Alden, and others, think they already are: we will all leave our minds outside with our coats and enter only to ' throw up or be ruptured. Ohne mich.

There, four paragraphs in and I've said nothing about Tchaikovsky's opera. That's the problem. That it should have emerged as an infinitely better piece than any of us ever suspected — a piece as much about Russia as Boris is, and marginally less successful only in that the public and private concerns are less cunningly inter- woven — is less to do with the production than with the orchestra and the singing. For both, no praise could be high enough. The sound, the tinta that Mark Elder drew from the orchestra was unmistakably Rus- sian, big, fat, hotly energetic and as dif- ferent from, say, his silky Rusalka-sound as it is possible to be. The playing in the pit was infinitely more stunning than anything that happened on stage.

The singers, who executed the produc- tion with admirable commitment, sur- passed themselves. At the centre of the private action is one of those typically Tchaikovskyan doomed relationships, this time between a young girl and an elderly tyrant, her godfather (he tortures and kills her real father, and would that the produ- cer had approached the piece from that Freudianly nightmarish angle). It is many years since I have heard spinto singing of such strength, steadiness and fervour as that delivered tirelessly by Janice Cairns — this was a real sensation. It is also a year or two since Malcolm Donnelly, who sang the title-role, has sounded so firmly focused of tone — a tour de force; if his characterisa- tion of this deeply enigmatic man was less clearly focused, then there were external circumstances to be considered.

And so on down the list: Richard Van Allan in superb form as the heroine's father and, as her mother, Felicity Palmer tearing your guts out with both her indi- vidual, fierce tone and her terrifying stage presence; Rowland Sidwell triumphantly fulfilling years of promise with clear, ge-

nuinely heroic tenor tone; and, in smaller roles, Alan Woodrow and Malcolm Rivers. With these performances and without the power-drill kitsch, the stature of the piece would have emerged even more clearly. Discipline, discipline: Mr Alden was on the right track. To take my mind off other things, I fell to wondering whether the Royal Opera, with all its famed interna- tional connections, could have cast the piece so strongly. the awful thing is, I doubt if they could, which says something really rather interesting about the relative status of the two companies.