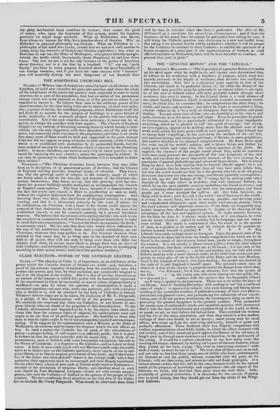 THE " GENUINE BRITON" AND TIIE " LIBERAL."

Butcxwoon's Maeaziez.—" The disposition of a genuine Briton is to make

up his mind upon what he ought to do, and having once determined that, to adhere to his resolution with a fixedness of purpose, which more fre- quently proceeds to the length of obstinacy, than deviates into vacillation and uncertainty. Now this is a character quite opposite to that of the Liberals, and much to be preferred before it ; for while the Briton of the old school may possibly carry his principle to an extent which is not right, he of the new or Liberal school will most probably tumble through sheer weakness into what is wrong. In the Liberal there is a total absence of the sound healthy firmness, which is absolutely essential to eminent useful- ness - he yields this; he concedes that ; he compromises the other thing ; he

wi 'nds, and twists, and hesitates ; and when he wants to accomplish a thing,

chooses rather to do it by a trick or stratagem, than by candour and plain dealing. You are never sure of him ; you are doubtful as to his object, and

quite uncertain as to the means he will adopt. Even his principles he yields

to circumstances, and lie is particularly deferential to a vague impalpable soMething, which he is pleased to call the spirit of the age,' but which, on investigation, appears to be nothing more than the affected tone of the weak trash which the press pours forth in such quantity. Your Liberal has

no strong hold "f anything; he has cast away the anchors of the old law, and national feeling, and exclusive privileges of Britons, as mere prejudices, and useless shackles to his enlarged comprehension. He floats about upon the wide sea of the world's opinion, and is blown hither and thither by every gust which may come from the various quarters of the globe. He neglects the interests of the people round about him, while he considers what may most promote the prosperity of the new kingdoms of the new world, and sacrifices the most important interests of his own country in a paroxysm of general philanthropy and universal benevolence. But in every thing he does, he is most anxious that he himself should appear ; he is not only of opinion that he knows better than all who have gone before him, but that the world should see that he is the person who has made the grand discovery that every one else was wrong ; and this he generally accomplishes, not in the ego hoe fe,,i fashion of Mr Cenning, but by getting some other disciple of the same schoe' to beslobbei him with nauseous flattery, for which he on the next suitable occasion beslobbers his friend in return ; and thus, sickening effeminate praise: get forth into the newspapers, and these people get a name amongst the millmn. eta', this time, however, no- thing solid is done ; your Lii.atral is the worst -tan of business in the world ; it is true. he seems busy, but it is in making speeches, and devising plans and complicated refinements upon what works well enedgh already. while the more arduous and important concerns of the State ate frequently neg- lected, because they afford no opportunity to display, or for shewing off the advantages of the new and improved system. To make amends. however, for the little he does, li^ is always ready to talk, or if you choose, to write you an essay, which is -nglish in nothing but its language, and not always even in that. His vanity is concerned in this, his name is in the mouths of men, as a speaker or an author, and his childish desire for popular at- .tention towards himself is gratified. * * * * The Liberals have sunk, we hope never to rise again. Upon the present state of the Government we have but to echo the hearty congratulations which are to be found in the mouth of almost every honest man, gentle or simple, throughout the country. It is not merely ir. places where politics form the chief subject of conversation, that these sentiments are to be found ; it is not only in the clubs, and in London streets, e t at fair and market, you see hale and stout fellows meeting with a more vigorous shake of the hand than usual, and pro- posing an extra glass of ale to the health of the Duke and the new Ministry. Such is the triumph of honest; and plain dealing ; the people are cheered at the sight of it, and England is herself again. The pleasure which men of

obser ti m feel at the e is proportioned to the danger from which they see tits. ri-sy delivered ; for it was an alarming fact, that the system of

the Libc.. e t--ap the young men who were corning out into public life, tees pursued in n ,nstances with the success that too frequently, follows

ien fls+tery is applied to inexperience. There was a set within the doors of me House, knot of 'bustlingBotherbys, with nothing in 'em' but a confused mass of crude iC Is upon every subject, who went buzzing and fizzing about

a-telling of the wonderful wonders of political economy, of their own philoso- phical and enlightened views, and pronouncing the subversion of our consti- tution, and of all our ancient institutions, the sovereignest thing on earth for procuring the greatest happiness to the greatest number. They persuaded the young men of enthusiastic minds and unsettled opinions, with assurances that it was the most old-fashioned and stupidest thing in the world, to think, or speak, or act, as their fathers did before them. They extolled the wisdom and the wit of the rising generation, and then they mixed in a few modern witlings of their own brood, to act as decoys ; smart young men for small affairs, who come up from the semi-whig university, brimful of prate and pedantic affectation. These deafened their less fidgetty companions with endless argumentations about fiddle faddle, to which the others listened with sad civility, and if they remained proof against the flattery of the old ones, at length gave in, through mere weariness arid exhaustion, to the pertinacity of the young. It would be a curious calculation to see how many votes the cunning old stagers obtained, by making cat's-paws of the novi hornines,whora they patted on the back, crying, 'See what an interesting creature ! with such a mind, he must be one of us.' We trust that all this is now at an end, and not only so, but that those young men of ability who have, unfortunately for themselves and the public, become connected with the party of the Liberals, will see their error, and return to solid and fixed principles. It is indeed almost certain that this will be the case, because it will be the natural result of the progress of knowledge and experience—the old stagers of the Liberals, we think, will find that their party must die with them. Inde- pendently of political distinction, it is necessary for the success of young men in good society, that they should get out from the circle of the Whigs and Liberals.