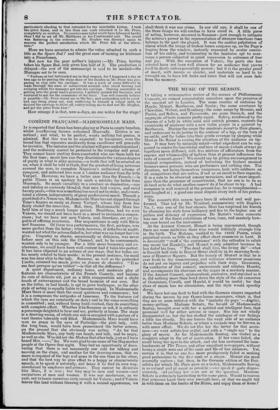 THE MUSIC OF THE SEASON.

IN taking a retrospective review of the season of Philharmonic Concerts, we cannot congratulate ourselves upon the progress of the musical art in London. The same routine of sinfonias by

Haydn. Mozart, Beethoven, and Spohr ; the same overtures by Cherubini, Weber, and Romberg ; the same songs by Rossini, and

Pacini, and Soliva, and Fioravente, are gone through, and the aggregate of taste remains pretty equal. Soliva, reinforced by the charms of a lady in white satin and ostrich plumes, contests the superiority of applause with a new violin player in a quintett by Beethoven. During the songs the amateurs resort to their glasses, and endeavour to do justice to the contour of a hip, or the turn of an ankle, and the ladies take their gentle revenge by sleeping while Mori or De I3eriot is raising the attention of the audience on tip- toe. It may here be naturally asked—what expedient can be sug- gested to render the knowledge and love of music (which always go together) more diffused, with less mixture of affectation from the - caprice and whimsicality of fashion than at present influences the taste of concert-goers ? We should say by giving encouragement to original composition, instead of bestowing the highest musical honours upon persons who are performers and nothing else. The directors, not being themselves composers, look with coldness on all competitors that are native, if not as an insult to their capacity. It is a rule to be observed among musicians, and of more import- ance than the grammar of counterpoint, that no one is to be so ill-bred as to do what another cannot do if he chose to try. A bad composer is well received at the present day, -he is complimented— and laughed at ; a good one must dispute every inch of his preten- sions.

The concerts this season have been ill selected mid well per- formed. That led by Mr. Weichsel, commencing with Haydn's No. 7, was one of the best chosen. Mori has surprised his friends by changing his style from brilliancy and fire to the higher one of pathos and delicacy of expression. De Beriot's violin concerto was one of the finest exhibitions of tone, tune, and masterly bow- ing ever heard on the instrument.

'"At the Ancient Concert, Mozart is being regenerated, though there are some midwives there who would willinglY strangle him in the birth. The Bishops, wedded to the 104th Psalm, relish papistical music as little as they affect short commons in Lent. It is downright "stuff o' the conscience" with the orthodox to relish any music but Handel:s, and Mozart is only admitted because he has bided his time. " The dead shall live, the living die"—what is thought half stale in Regent Street shall be in its morning fresh- ness at Hanover Square. But the beauty of Mozart is that he is ever fresh to the unmercenary, and welcome wherever musicians do not put on bigotry and prejudice with their wigs. Greatorex, the conductor of this concert, understands and relishes Handel, and accompanies his choruses on the organ in a masterly manner. If the Ancient Concert, aristocratical, exclusive, and starched as it is, did nothing more than hand down the style of the old concertos of Geminiani, Corelli, and Handel, it would be useful ; for that class of music has no chroniclers, and the style would speedily decay. We have but one fault to find with the German singers imported during the season by our Opera-house managers, which is, that they are so soon infected with the " maladie du pays "—Anglicie money-getting. Madame Schutz, the herald of Mademoiselle Sontag, brought over with her a spirited and intelligent face, that promised well for either actress or singer. She has not wholly disappointed us, but she has studied the catalogue of our failings a little too closely. No one knows the weak side of an audience

better than Madame Schutz, or where a roulade may be thrown in with more effect. We do not like her the better for this acute-

ness—we want artists less artful, and with a "single eye" to the

glory of music. As for Mademoiselle Sontag, she visited us a complete adept in the art of Captivation. If her voice failed, she could bring her eyes to the attack, and she has sustained the bom-

bardments of The Times, and other ungallant newspapers, without losing a single man out of the rank and file of her admirers. Yet,

certain it is, that no one has more prodigiously failed in making

good pretensions to the first rank as a singer. Mozart she must assuredly eschew ; but, then, in the German edition of the Frei-

schiitz (of which Mr. Pixis gave us a taste), Mademoiselle Sontag is as natural and pleasant as possible ;—we speak it quite dispas- sionately, end putting her eyes out of the question. Madame

Schutz is extremely fascinating in the same piece. Would to heaven that actresses knew their own strength here, or that we might fall in with them on the banks of the Rhine, and enjoy them at home