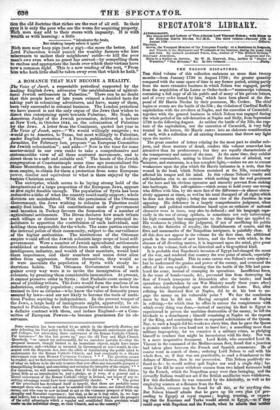 A ROMANCE THAT MAY BECOME A REALITY.

1718 Voice of Jacob, a respectable periodical supported by the leading. English Jews, advocates "the establishment of agricul- tural Jewish settlements in Palestine." There can be no doubt that this people have of late years evinced a decided taste for taking part in colonizing adventures, and have, many of them, been very successful in colonial business. The London periodical we have named is not the only organ of the Jews that wishes to .direct this enterprising spirit towards Palestine. Mr. Noah, an ,American Judge of the Jewish persuasion, delivered a lecture at New York, in October 1844, on the colonization of Palestine ag. the Jews. A letter from the Continent, quoted last year in .The Voice of Jacob, says—" We would willingly emigrate ; we (would go to America, to Texas, but most willingly to Palestine, under English protection." A French ,publication, the Archives Israelites, for February last, proposes ' an European Committee for Jewish colonization" ; and adds—" Now is the time for some -master-mind in our own ranks to take a comprehensive and statesmanlike view of all these scattered movements, and to .direct them to a safe and suitable end." The heads of the Jewish -congregation at Constantinople some time ago memorialized Sir -Moses Montefiore, in the name of the Jews resident in the Otto- anan .empire, to obtain for them a protection from some European power, similar and equivalent to what is there enjoyed by the twariotis Christian sects.

The enterprise, which seems to be laying strong hold of the imaginations of a large proportion of the European Jews, appears at first sight feasible enough. The population of Syria has been reduced to a tithe of what the country could easily support; whole districts are uninhabited. With the permission of the Ottoman -Government, the Jews wishing to colonize in Palestine could -easily find lands. The old constitutional mode of government ',and taxation in Turkey favours the formation of a number of ( agricultural settlements. The Divan declares how much tribute each village or district has to pay ; leaving the principal in- habitants to apportion the contribution of each individual, and holding them responsible for the whole. The same parties exercise the internal police of their community, subject to the surveillance . of the higher authorities. The institutions of the Ottoman empire would afford the Jewish colonists large scope of local self- government. Were a number of Jewish agricultural settlements established at moderate distances from each other, the superior intelligence, industry, and wealth of their members, would lend them importance, and their numbers and union deter alien tribes from aggression. Secure themselves, they would as it were inoculate the population of Syria with steady in- dustrious habits. The Ottoman Government would be a gainer every way were it to invite the immigration of such colonists, by granting them considerable immunities. At present, it cannot perserve order in Syria ; that Pashalic costs money in- stead of yielding tribute. The Jews would form the nucleus of an -industrious, orderly population; consisting of men who have been trained to live as citizens—who know the value of domestic peace assured by laws—and are not likely to become the tools of ambi- tious Pashas aspiring to independence. In the present temper of the Jews, a large body of immigrants might, apparently, be at- tracted to Palestine, were the Ottoman Government to enter into a definite contract with them, and induce England—or a Com- mittee of European Powers—to become guarantees for its ob- servance.