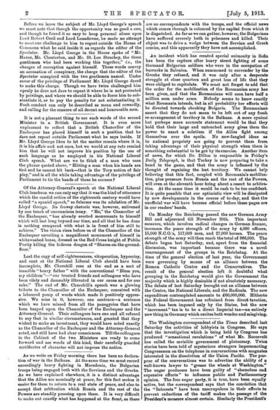 On Monday the Reichstag passed the new German Army Bill

and adjourned till November 20th. This important measure, which involves radical changes in German finance, increases the peace strength of the army by 4,000 officers, 15,000 N.C.O.'s, 117,000 men, and 27,000 horses. The peace strength of the army will then reach the total of 866,000. The debate began last Saturday, and, apart from the financial discussion, was important because there was a novel rearrangement of the groups in the Reichstag. At the time of the general election of last year, the Government were governing by means of an alliance between the Roman Catholic Centre and the Conservatives. The result of the general election left it doubtful what grouping in the Reichstag would give the Government the majority which is highly desirable if not absolutely necessary. The debate of last Saturday brought out an alliance between the Centre, the National Liberals, and the Radicals. The new expenditure contemplated amounts to £60,000,000. Hitherto the Federal Government has refrained from direct taxation, which has been imposed only by the States, but the new "increment" tax is to be a direct Imperial tax—an entirely new thing in Germany which excites both wonder and misgiving.