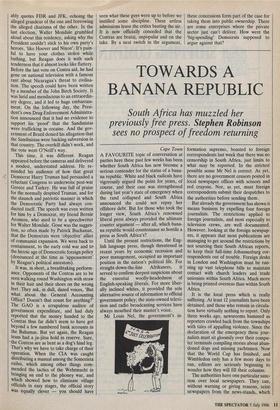 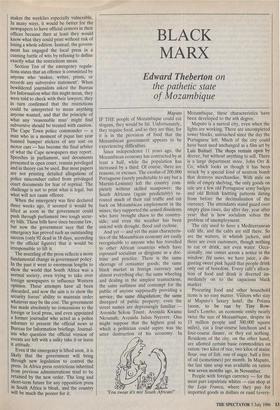 TOWARDS A BANANA REPUBLIC

South Africa has muzzled her

sees no prospect of freedom returning

Cape Town A FAVOURITE topic of conversation at parties here these past few weeks has been whether South Africa has now become a serious contender for the status of a bana- na republic. White and black radicals have vigorously argued the point for years, of course, and their case was strengthened during last year's state of emergency when the rand collapsed and South Africa announced she could not repay her offshore debt. But for those who took the longer view, South Africa's renowned liberal press always provided the ultimate counter argument — after all, which bana- na republic would countenance so hostile a press as South Africa's? Until the present restrictions, the Eng- lish language press, though" threatened in recent years by economic recession and poor management, occupied an important position in the nation's political life. For straight-down-the-line Afrikaners, it served to confirm deepest suspicions about the essential woolly-headedness of English-speaking liberals. For more liber- ally inclined whites, it provided the sole alternative source of information to official government policy; the state-owned televi- sion and radio broadcasting services have always mouthed their master's voice.

Mr Louis Nel, the government's in- formation supremo, boasted to foreign correspondents last week that there was no censorship in South Africa, just limits to what may be reported. In the strictest possible sense Mr Nel is correct. As yet, there are no government censors posted in local newspaper offices with scissors and red crayons. Nor, as yet, must foreign correspondents submit their despatches to the authorities before sending them.

But already the government has shown it means business by expelling four foreign journalists. The restrictions applied to foreign journalists, and most especially to television crews, are well documented. However, looking at the foreign newspap- ers, it appears that most publications are managing to get around the restrictions by not sourcing their South African reports, to keep their full-time Johannesburg cor- respondents out of trouble. Foreign desks in London and Washington must be run- ning up vast telephone bills to maintain contact with church leaders and trade unionists within South Africa. Much more is being printed overseas than within South Africa.

It is the local press which is really suffering. At least 12 journalists have been detained, and those who remain in circula- tion have virtually nothing to report. Only three weeks ago, newsrooms hummed as reporters crawled back from the townships with tales of appalling violence. Since the declaration of the emergency these jour- nalists must sit gloomily over their compu- ter terminals compiling stories about aban- doned dogs and missing yachtsmen. Now that the World Cup has finished, and Wimbledon only has a few more days to run, editors are seriously beginning to wonder how they will fill their columns.

The authorities have one particular sanc- tion over local newspapers. They can, without warning or giving reasons, seize newspapers from the news-stands, which makes the weeklies especially vulnerable. In many ways, it would be better for the newspapers to have official censors in their offices because then at least they would know what they could print without risk of losing a whole edition. Instead, the govern- ment has engaged the local press in a cunning battle of wits by refusing to define exactly what the restrictions mean.

Section Ten of the emergency regula- tions states that an offence is committed by anyone who 'makes, writes, prints, or records any subversive statement'. When bewildered journalists asked the Bureau for Information what this might mean, they were told to check with their lawyers; they in turn confirmed that the restrictions could be interpreted to mean anything anyone wanted, and that the principle of what any 'reasonable man' might find subversive should be treated with caution. The Cape Town police commander — a man who in a moment of pique last year banned bumper stickers of any sort on motor cars — has become the final arbiter of what the Cape newspapers may report. Speeches in parliament, and documents presented in open court, remain privileged and in theory can be used. But most papers are not printing detailed allegations of police misconduct culled from privileged court documents for fear of reprisal. The challenge is not to print what is legal, but what will not cause offence.

When the emergency was first declared three weeks ago, it seemed it would be lifted as soon as the government could push through parliament two tough secur- ity bills. These bills have since become law, but now the government says that the emergency has proved such an outstanding success (only 92 dead in 18 days, according to the official figures) that it would be irresponsible to lift it.

The muzzling of the press reflects a more fundamental change in government policy. In the past it went to enormous lengths to show the world that South Africa was a normal society, even trying to take over foreign newspapers to influence Western opinion. These attempts have all been discarded, and now the aim is to show the security forces' ability to maintain order whatever may be the cost. The government has made absolutely no concessions to the foreign or local press, and even appointed a former journalist who acted as a police informer to present the official news at Bureau for Information briefings. Journal- ists who question the official version of events are left with a sulky take it or leave it attitude.

Even if the emergency is lifted soon, it is likely that the government will bring through new legislation to control the press. In Africa press restrictions inherited from previous administrations tend to be retained by the new order. The long and short-term future for any opposition press in South Africa is bleak, and the country will be much the poorer for it.