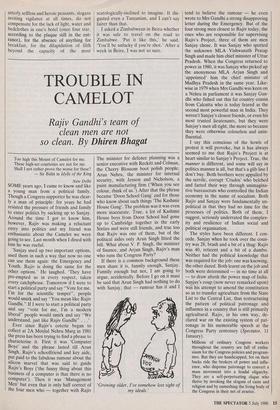 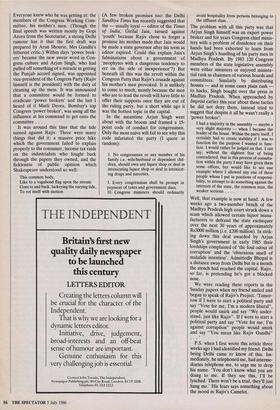 Rajiv Gandhi's team of clean men are not

so clean. By Dhiren Bhagat Too high this Mount of Camelot for me. These high-set courtesies are not for me. Shall I not rather prove the worse for these? — Sir BalM in Idylls of the King

SOME years ago, I came to know and like a young man from a political family. Though a Congress supporter he was clear- ly a man of principle: for years he had resisted the pressure of friends and family to enter politics by sucking up to Sanjay. Around the time I got to know him, however, Rajiv was making a reluctant entry into politics and my friend was enthusiastic about the Camelot we were going to see. Last month when I dined with him he was rueful.

Ever since Rajiv's coterie began to collect at 2A Motilal Nehru Marg in 1981 the press has been trying to find a phrase to characterise it. First it was 'Computer Boys' and the phrase lasted till Arun Singh, Rajiv's schoolfriend and key aide, put paid to the fabulous rumour about the silicon marvel that was said to guide Rajiv's Boys (`the funny thing about this business of a computer is that there is no computer'). Then it was 'Management Men' but even that is only half correct of the four men who — together with Rajiv The minister for defence planning was a senior executive with Reckitt and Colman, the Cherry Blossom boot polish people; Arun Nehru, the minister for internal security, with Jenson and Nicholson, a paint manufacturing firm ('When you see colour, think of us.') After that the phrase became Doon School Gang' and for those who know about such things 'The Kashmir House Gang'. The problem was it was even more inaccurate. True, a lot of Kashmir House boys from Doon School had gone up to Cambridge together in the early Sixties and were still friends, and true too that Rajiv was one of them, but of the political aides only Arun Singh fitted the bill. What about V. P. Singh, the minister of finance, and Arjun Singh, Rajiv's man who runs the Congress Party?

If there is a common background these men share it is, funnily enough, Sanjay. Funnily enough but not, I am going to argue, accidentally. Before I go on it must be said that Arun Singh had nothing to do with Sanjay, that — rumour has it and I `Growing older, I've somehow lost sight of my ideals.' tend to believe the rumour — he even wrote to Mrs Gandhi a strong disapproving letter during the Emergency. But of the four strong men closest to Rajiv today, the ones who are responsible for supervising Rajiv's Project, three of them are men Sanjay chose. It was Sanjay who spotted the unknown MLA Vishwanath Pratap Singh and made him chief minister of Uttar Pradesh. When the Congress returned to power in 1980, it was Sanjay who picked up the anonymous MLA Arjun Singh and `appointed' him the chief minister of Madhya Pradesh in the same year. Like- wise in 1979 when Mrs Gandhi was keen on a Nehru in parliament it was Sanjay Gan- dhi who fished out this fat country cousin from Calcutta who is today feared as the second most powerful man in India. They weren't Sanjay's closest friends, or even his most trusted lieutenants, but they were Sanjay's men all right, the more so because they were otherwise colourless and unin- fluential.

I say this conscious of the howls of protest it will provoke, but it has always seemed to me that Rajiv's Project is at heart similar to Sanjay's Project. True, the manner is different, and some will say in politics manner is all, but that's a glib line don't buy. Both brothers were appalled by the servile, corrupt `Credos' who belched and farted their way through unimagina- tive bureaucrats who controlled the Indian economy in the name of socialism. Both Rajiv and Sanjay were fundamentally un- political in that they had no time for the processes of politics. Both of them, I suggest, seriously underrated the complex- ity and resilience of Indian social and political organisation.

The styles have been different. I con- cede. Sanjay when he took over the coun- try was 28, brash and a bit of a thug: Rajiv was 40, reticent and a bit of a dumbo. Neither had the political knowledge that was required for the job: one was knowing, the other dazed. Both learnt on the job and both were determined — in no time at all — to draw afresh the power map of India. Sanjay's coup (now never remarked upon) was his attempt to amend the constitution so as to transfer agriculture from the State List to the Central List, thus restructuring the pattern of political patronage and influence in a country that is still primarily agricultural. Rajiv, in his own way, de- clared war on the existing system of pat- ronage in his memorable speech at the Congress Party centenary (Spectator, 11 January).

Millions of ordinary Congress workers throughout the country are full of enthu- siasm for the Congress policies and program- mes. But they are handicapped, for on their backs ride the brokers of power and influ- ence, who dispense patronage to convert a mass movement into a feudal oligarchy. They are a self-perpetuating clique who thrive by invoking the slogans of caste and religion and by enmeshing the living body of the Congress in their net of avarice.

Everyone knew who he was getting at: the members of the Congress Working Com- mittee, his mother's men. (Though the final speech was written mostly by Gopi Arora from the Secretariat, a strong Delhi rumour has it that the first draft was prepared by Arun Shourie, Mrs Gandhi's bitterest critic.) Within days 'power brok- ers' became the new swear word in Con- gress culture and Arjun Singh, who had pulled off something of a miracle in getting the Punjab accord signed, was appointed vice-president of the Congress Party (Rajiv himself is the president) with the duty of cleaning up the mess. It was announced that a committee would be formed to eradicate 'power brokers' and the last I heard of it Murli Deora, Bombay's top Congress 'power broker', was using all the influence at his command to get onto the committee . . . .

It was around this time that the tide turned against Rajiv. There were many things that did it: a massive price hike which the government failed to explain properly to the consumer, income tax raids on the industrialists who fought back through the papers they owned, and the fickleness of public opinion which Shakespeare understood so well:

This common body, Like to a vagabond flag upon the stream Goes to and back, lackeying the varying tide, To rot itself with motion.

(A few broken promises too: the Delhi Sandhya Times has recently suggested that the — usually loyal — editor of the Times of India, Girilal Jain, turned against `youth' because Rajiv chose to forget a promise his mother made that Jain would be made a state governor after his term as editor expired. Could this explain Jain's fulminations about a government of `neophytes with a dangerous tendency to err on the side of inexperience'?) But beneath all this was the revolt within the Congress Party that Rajiv's crusade against his mother's men provoked. It is unlikely to come to much, mostly because the men who are to lead the revolt will have little to offer their supports once they are out of the ruling party, but a short while ago it was the hottest topic in the capital.

In the meantime Arjun Singh went about with the broom and framed a 15- point code of conduct for congressmen. Only the most naive will fail to see why this code infuriated the party (I quote at random):

3. Every congressman shall be prompt in payment of taxes and government dues.

10. Congress ministers should ordinarily avoid hospitality from persons belonging to the affluent class . . . .

The problem with all this piety was that Arjun Singh himself was an expert power broker and for years Congress chief minis- ters with a problem of dissidence on their hands had been exhorted to learn from Arjun Singh's handling of his party men in Madhya Pradesh. By 1983 120 Congress members of the state legislative assembly were either ministers or enjoyed ministe- rial rank as chairmen of various boards and committees. Similarly by distributing houses — and in some cases plain cash — to hacks, Singh bought over the press in Madhay Pradesh. When approached by Imprint earlier this year about these tactics he did not deny them, instead tried to suggest that despite it all he wasn't really a `power broker': I had a majority in the assembly — maybe a very slight majority — when I became the leader of the house. Within the party itself, certainly had to create stability if I was to function for the purpose I wanted to func- tion. I would rather be judged on that. 1 can say, without the slightest fear of being contradicted, that in this process of consulta- tion within the party I may have given them some offices, but would like to see one example where I allowed any one of these people whom I put in positions of responsi- bility, to attempt to do something against the interests of the state, the common man, the weaker sections . . . .

Well, that example is now at hand. A few weeks ago a two-member bench of the Madhya Pradesh high court struck down a scam which allowed certain liquor manu- facturers to defraud the state exchequer over the next 30 years of approximately Rs3000 million (i.e. £200 million). In strik- ing down this deal awarded by Arjun Singh's government in early 1985 their lordships complained of 'the foul odour of corruption' and the 'obnoxious smell of malafide intention'. Admittedly Bhopal is a distance away from Delhi but in a month the stench had reached the capital. Rajiv, so far, is pretending he's got a blocked nose.

P.S. when I first wrote this article three weeks ago I had identified my friend. Delhi being Delhi came to know of this. Im- mediately, he telephoned me, had interme- diaries telephone me, to urge me to drop his name. 'You don't know what you are doing to me. If they see this, I'll be lynched. There won't be a trial, they'll just hang me.' His fears says something about the mood in Rajiv's Camelot.