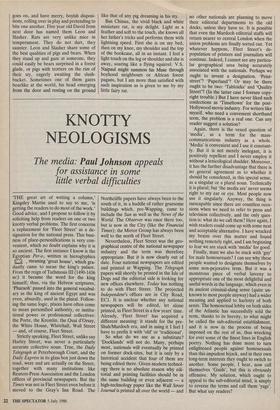 for assistance in some little verbal difficulties

`THE great art of writing a column,' Kingsley Martin used to say to me, 'is getting the readers to do most of the work.' Good advice, and I propose to follow it by soliciting help from readers on one or two knotty verbal problems. The first concerns a replacement for 'Fleet Street' as a de- signation for the national press. This busi- ness of place-personifications is very con- venient, which no doubt explains why it is so ancient. The first instance I know is the Egyptian Per-o, written in hieroglyphics , meaning 'great house', which gra- dually came to mean the king's palace. From the reign of Tuthmosis III (1490-1436 sc) it became the word for the king himself; thus, via the Hebrew scriptures, `Pharaoh' passed into the general vocabul- ary as the king of ancient Egypt and was even, absurdly, used in the plural. Follow- ing the same logic, places have often come to mean personified authority, or institu- tional power or professional collectives: the Porte, the Kremlin, the Quai d'Orsay, the White House, Whitehall, Wall Street — and, of course, Fleet Street.

Strictly speaking, Fleet Street, unlike say Harley Street, was never a particularly accurate collective noun. True, the Daily Telegraph at Peterborough Court, and the Daily Express in its glass box just down the road, were and are actually on the Street, together with many institutions like Reuters-Press Association and the London offices of provincial newspapers. But the Times was not in Fleet Street even before it moved to the Gray's Inn Road. The Northcliffe papers have always been to the south of it, in a huddle of rather gruesome buildings which, pre-Wapping, came to include the Sun as well as the News of the World. The Observer was once there too, but is now in the City (like the Financial Times); the Mirror Group has always been well to the north of Fleet Street.

Nevertheless, Fleet Street was the geo- graphical centre of the national newspaper industry and the term was therefore appropriate. But it is now clearly out of date. Four national newspapers are edited and printed at Wapping. The Telegraph papers will shortly be printed in the Isle of Dogs and the editorial side is looking for new offices elsewhere. Today has nothing to do with Fleet Street. The projected Independent's offices are in City Road, EC1. It is unclear whether any national newspapers will be edited, let alone printed, in Fleet Street in a few years' time. Already, 'Fleet Street' has acquired a different meaning: it stands for the pre- Shah/Murdoch era, and in using it I feel I have to prefix it with 'old' or 'traditional'.

So what do we use as a substitute? Docklands' will not do. Many, perhaps most, nationals will eventually be printed on former dock-sites, but it is only by a historical accident that four of them are being edited there. Given modern technol- ogy there is no absolute reason why edi- torial and printing facilities should be in the same building or even adjacent — a high-technology paper like the Wall Street Journal is printed all over the world — and no other nationals are planning to move their editorial departments to the old docks, unless they have to. It is possible that even the Murdoch editorial staffs will return nearer to central London when the union problems are finally sorted out. Yet whatever happens, Fleet Street's de- population of printers and journalists will continue. Indeed, I cannot see any particu- lar geographical area being accurately associated with the nationals. Perhaps we ought to invent a designation. 'Print- street'? 'Paperlandi Or may be there ought to be two: Tabloidia' and 'Quality Street'? (In the latter case I foresee copy- right trouble.) But I have never liked such confections as `Tinseltown' for the post- Hollywood movie industry. For writers like myself, who need a convenient shorthand term, the problem is a real one. Can any reader suggest a solution?

Again, there is the vexed question of `media', as a term for the mass- communications industry as a whole. `Media' is convenient and I use it constant- ly. But it is not merely inelegant, it is positively repellent and I never employ it without a lexicological shudder. Moreover, it has the further disadvantage that there is no general agreement as to whether it should be considered, in this special sense, as a singular or a plural noun. Technically it is plural; but 'the media are' never seems right to my ear or eye. Most people now use it singularly. Anyway, the thing is inescapable since there are countless occa- sions when we need to refer to press and television collectively, and the only ques- tion is: what do we call them? Here again, I wish readers could come up with some neat and acceptable alternative. I have wracked my brains over this matter and found nothing remotely right, and I am beginning to fear we are stuck with 'media' for good.

Finally, must we also be stuck with 'gay' for male homosexuals? I can see why these people wanted to designate themselves by some non-pejorative term. But it was a monstrous piece of verbal larceny to appropriate one of the most delightful and useful words in the language, which even in its ancient criminal-slang sense (quite un- known to most people anyway) had a wider meaning and applied to harlotry of both sexes. The homosexual lobby on both sides of the Atlantic has successfully sold the term, thanks to its brevity, to what might be called the sub-editorial establishment, and it is now in the process of being imposed on the rest of us, thus wrecking for ever some of the finest lines in English poetry. Nothing has done more to turn enlightened people against homosexuals than this impudent hijack, and in their own long-term interests they ought to switch to another. Some people, I hear, now call themselves `Gaids', but this is obviously offensive. My solution, which ought to appeal to the sub-editorial mind, is simply to reverse the terms and call them `yags'. But what say readers?