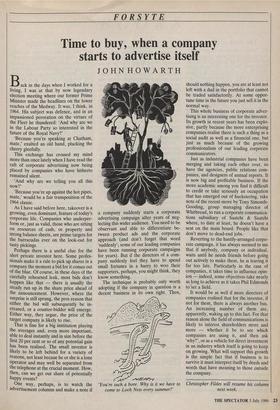 Time to buy, when a company starts to advertise itself

Back in the days when I worked for a living, I was at that by now legendary election meeting where our former Prime Minister made the headlines on the lower reaches of the Medway. It was, I think, in 1964. His subject was defence, and in an impassioned peroration on the virtues of the Fleet he thundered: 'And why are we in the Labour Party so interested in the future of the Royal Navy?'

`Because you're speaking at Chatham, mate,' exulted an old hand, plucking the cherry gleefully.

This exchange has crossed my mind more than once lately when I have read the raft of corporate advertising now being placed by companies who have hitherto remained silent.

`And why are we telling you all this now?'

`Because you're up against the hot pipes. mate,' would be a fair transposition of the 1964 classic.

As I have said before here, takeover is a growing, even dominant, feature of today's corporate life. Companies who underper- form or, just as valid, those who are sitting on resources of cash, or property and strong balance sheets, are prime targets for the barracudas ever on the look-out for tasty pickings.

Perhaps there is a useful clue for the alert private investor here. Some profes- sionals make it a rule to pick up shares in a company the moment a bid for it comes out of the blue. Of course, in these days of the carefully rehearsed leak, most bids don't happen like that — there is usually the steady run up in the share price ahead of the announcement. However, where the surprise is still sprung, the pros reason that either the bid will subsequently be in- creased, or a counter-bidder will emerge. Either way, they argue, the price of the target company is likely to rise.

That is fine for a big institution playing the averages and, even more important, able to deal instantly and in size before the first 20 per cent or so of any potential gain has been realised. The small investor is likely to be left behind for a variety of reasons, not least becaue he or she is a lone operator and may well be separated from the telephone at the crucial moment. How, then, can we get our share of potentially happy events?

One way, perhaps, is to watch the advertisement columns and make a note if a company suddenly starts a corporate advertising campaign after years of neg- lecting this wider audience. You need to be observant and able to differentiate be- tween product ads and the corporate approach (and don't forget that word `suddenly': some of our leading companies have been running corporate campaigns for years). But if the directors of a com- pany suddenly feel they have to spend small fortunes in a hurry to woo their supporters, perhaps, you might think, they know something. The technique is probably only worth adopting if the company in question is a decent business in its own right. Then,

`You're such a bore. Why is it we have to come to Loch Ness every summer?'

should nothing happen, you are at least not left with a dud in the portfolio that cannot be traded satisfactorily. At some oppor- tune time in the future you just sell it in the normal way.

This whole business of corporate adver- tising is an interesting one for the investor. Its growth in recent years has been explo- sive, partly because the more enterprising companies realise there is such a thing as a social audit as well as a financial one, but just as much because of the growing professionalism of our leading corporate communicators.

Just as industrial companies have been merging and taking each other over, so have the agencies, public relations com- panies, and designers of annual reports. It is now big and profitable business. If the more academic among you find it difficult to credit or take seriously an occupation that has emerged out of huckstering, take note of the recent move by Tony Simonds- Gooding, group managing director of Whitbread, to run a corporate communica- tions subsidiary of Saatchi & Saatchi where, to date at least, he doesn't have a seat on the main board. People like that don't move to dead-end jobs.

Reverting to the hastily-arranged corpo- rate campaign, it has always seemed to me that if anybody, company or individual, waits until he needs friends before going out actively to make them, he is leaving it far too late. Particularly in the case of companies, it takes time to influence opin- ion — indeed, some objectives take nearly as long to achieve as it takes Phil Edmonds to "set a field.

It would be as well if more directors of companies realised that for the investor, if not for them, there is always another bus. An increasing number of them are, apparently, waking up to this fact. For that reason alone the field of communications is likely to interest shareholders more and more — whether it be to see which companies are using it, and then ask `why?', or as a vehicle for direct investment in an industry which itself is going to keep on growing. What will support this growth is the simple fact that if business is to survive it must interpret itself by deeds and words that have meaning to those outside the company.