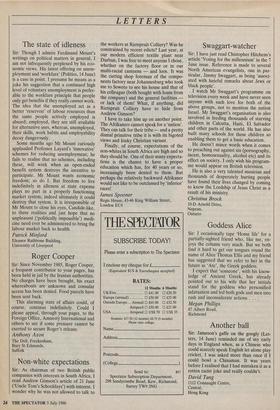 LETTERS The state of idleness

Sir: Though I admire Ferdinand Mount's writings on political matters in general, I am not infrequently perplexed by his eco- nomic views. His latest offering on unem- ployment and 'workfare' (Politics, 14 June) is a case in point. I presume he means as a joke his suggestion that a continued high level of voluntary unemployment is prefer- able to the workfare principle that people only get benefits if they really cannot work. The idea that the unemployed act as a better 'reservoir' of labour resources than the same people actively employed is absurd; employed, they are still available for alternative uses, whereas, unemployed, their skills, work habits and employability decay dangerously.

Some months ago Mr Mount curiously applauded Professor Layard's 'innovative' schemes for reducing unemployment; he fails to realise that no schemes, including these, will work when an open-ended benefit system destroys the incentive to participate. Mr Mount wants economic freedom; so do I. But freedom to live indefinitely in idleness at state expense plays no part in a properly functioning market system; indeed ultimately it could destroy that system. It is irresponsible of Mr Mount to close his eyes, Candide-like, to these realities and just hope that no unpleasant (`politically impossible') medi- cine need ever be adminstered to bring the labour market back to health.