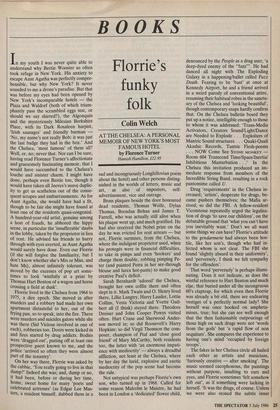 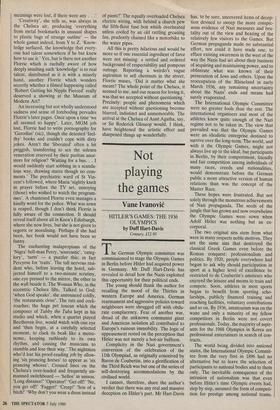 AT THE CHELSEA: A PERSONAL MEMOIR OF NEW YORK'S MOST FAMOUS HOTEL by Florence Turner Hamish Hamilton, £12.95 In my youth I was never quite able to understand why Bertie Wooster so often took refuge in New York. His anxiety to escape Aunt Agatha was perfectly compre- hensible, but why New York? It never sounded to me a drone's paradise. But that was before my eyes had been opened by New York's incomparable hotels — the Plaza and Waldorf (both of which trium- phantly pass the scrambled eggs test, or should we say shirred?), the Algonquin and the mysteriously Milesian Berkshire Place, with its Dark Rosaleen harpist, `Irish sausages' and friendly barman 'No, my name's not really Bob: it was just the last badge they had in the box.' And the Chelsea, 'most famous' of them all? Well, er, no; never that. Nor can I be sure, having read Florence Turner's affectionate and gruesomely fascinating memoir, that I would have succumbed to the Chelsea's louche and sinister charm. I might have done, perhaps even Bertie too, though it would have taken all Jeeves's suave duplic- ity to get us scatheless out of the conse- quent scrapes and embarrassments. As for Aunt Agatha, she would have had a fit, though to be fair she might have found at least one of the residents quasi-congenial. A hundred-year-old artist, genuine among a host of frauds, he abhored the hippy scene, in particular the 'insufferable' daubs in the lobby, taken by the proprietor in lieu of rent. He advised his friends to hurry through with eyes averted, as Aunt Agatha would surely have done. Even our Florrie (if she will forgive the familiarity, but I don't know whether she's Mrs or Miss, and hate Ms), almost infinitely tolerant, was moved by the excesses of pop art some- times to look 'wistfully at a print by Thomas Hart Benton of a wagon and horse crossing a field at dusk'.

Florrie lived in the Chelsea from 1964 to 1975, a dire epoch. She moved in after murders and a robbery had made her own apartment distasteful to her, out of the frying pan, so to speak, into the fire. There were murders and suicides galore while she was there (Sid Vicious involved in one of each), robberies too. Doors were kicked in and fires started by drug addicts. Bodies were 'dragged out', putting off at least one prospective guest known to me, and the police 'arrived so often they were almost part of the tenantry'. On her way there, Florrie was asked by the cabbie, 'You really going to live in that dump?' Indeed she was; and, dump or no, it had been, before or during her time, home, sweet home for many `poets and celebrated actresses' (as Edgar Lee Mas- ters, a resident himself, dubbed them in a sad and incongruously Longfellovian poem about the hotel) and other persons disting- uished in the worlds of letters, music and art, as also of imposters, self- advertisement, vice and outrage.

Brass plaques beside the door honoured dead residents, Thomas Wolfe, Dylan Thomas, Brendan Behan and James T. Farrell, who was actually still alive when his plaque went up, and much gratified. He had also received the Nobel prize on the day he was evicted for rent arrears — but not, Florrie surmises, from the Chelsea, where the indulgent proprietor used, when his proteges were in financial difficulties, to take in pimps and even 'hookers' and charge them double, robbing pimping Pe- ter (and painted Petra in her see-through blouse and lurex hot-pants) to make good creative Paul's deficit.

Sarah Bernhardt 'adored' the Chelsea, brought her own coffin there and often slept in it. Mark Twain and 0. Henry lived there, Lillie Langtry, Harry Lauder, Lottie Collins, Vesta Victoria and Yvette Guil- bert all (I think) stayed there. Theodore Dreiser and John Cooper Powys visited often. Hart Crane and Sherwood Ander- son moved in; so did Roosevelt's Harry Hopkins; so did Virgil Thomson the com- poser, champion of Piaf and 'close good friend' of Mary McCarthy, both residents too, the latter with 'an enormous impati- ence with mediocrity' — always a dreadful affliction, not least at the Chelsea, where by her day the lurid, explosive and exotic mediocrity of the pop scene had become the rule.

Not untypical was perhaps Florrie's own son, who turned up in 1968. Called for some reason Malcolm le Maistre, he had been in London a 'dedicated' flower child, denounced by the People as a drug user, 'a deep-dyed enemy of the "fuzz'. He had danced all night with The Exploding Galaxy in a happening/ballet called Fuzz Death. Fearing to be 'bust' at once at Kennedy Airport, he and a friend arrived in a weird parody of conventional attire, resuming their habitual robes in the sanctu- ary of the Chelsea and 'looking beautiful', though contemporary snaps hardly confirm that. On the Chelsea bulletin board they put up a notice, intelligible enough to those to whom it was addressed: 'Trans-Media Activators, Creators Sound/Light/Dance are Needed to Explode . . . Exploiters of Mantric Sound structures . . Quaki-Quali Akashic Records, Tantric Flesh-poems . . . NOW Come See STONE MONKEY Room 604 Transcend Time/Space/Inertia/ Inhibitions Masturbation . . In the Chelsea this invitation produced an im- mediate response from members of the Incredible String Band, resulting in a rock pantomime called U.

Drug 'requirements' in the Chelsea in- creased; 'artists', desperate for drugs, be- came pushers themselves; the Mafia ar- rived; so did the FBI. A fellow-resident Vicomtesse repeatedly urged the legalisa- tion of drugs 'to save our children', on the debatable ground that 'what you can't have you inevitably want.' Don't we all want some things we can have? Florrie's attitude to the gendarmerie had always been hos- tile, like her son's, though who had in- fected whom is not clear. The FBI she found 'slightly absurd in their uniformity', and 'perversely, I think we felt sympathy for the offenders'.

That word 'perversely' is perhaps illumi- nating. Does it not indicate, as does the wistful reference to Hart Benton and much else, that buried under all the incongruous 60's claptrap, for which even then Florrie was already a bit old, there are endearing vestiges of a perfectly normal lady? She herself was once hooked on ampheta- mines, true; but she can see well enough that the then fashionable outpourings of those high on such drugs were not 'words from the gods' but 'a rapid flow of non sequiturs'. She compares the experience to having one's mind 'occupied by foreign troops'.

The fakes in her Chelsea circle all hailed each other as artists and musicians, `furiously creative — after smoking'. The music seemed cacophonous, the paintings without purpose, insulting to ears and eyes, and Florrie sometimes 'felt somehow left out', as if something were lacking in herself. 'It was the drugs, of course. Unless we were also stoned the subtle inner meanings were lost, if there were any . .

`Creativity', she tells us, was always in the Chelsea air, producing 'everything from metal bookmarks in unusual shapes to plastic bags of strange outline' — the whole gamut indeed, from Y to Z. 'Know- ledge surfaced, the knowledge that every- one had talent somewhere if he but knew how to use it.' Yes, but is there not another Florrie which is ruefully aware of how deeply insulting such 'knowledge' is to real talent, distributed as it is with a miserly hand, another Florrie which wonders secretly whether a filmed happening called `Robert Getting his Nipple Pierced' really deserved a showing at the Museum of Modern Art?

An increasing but not wholly understood sadness and sense of foreboding pervades Florrie's later pages. Once upon a time 'we all seemed so happy'. Later, MGM job lost, Florrie had to write pornography for `Gerodias' (sic), though she detested 'feel- thy' books and couldn't cope with dirty jokes. Aren't the 'liberated' often a bit priggish, transferring to sex the solemn veneration reserved by their puritan ance- stors for religion? 'Waiting for a bus. . . I would suddenly start sobbing in a scanda- lous way, drawing stares though no com- ments.' The psychiatric ward of St Vin- cent's followed, where Maria 'nightly knelt in prayer before the TV set, annoying (those) who wished to watch the program- mes'. A chastened Florrie even manages a kindly word for the police. What was sown is reaped, though I don't think Florrie is fully aware of the connection. It should reveal itself above all in Knox's Edinburgh, where she now lives, but she is not given to regrets or moralising. Perhaps if she had been, her book would not have been so funny.

The enchanting malapropisms of the `Nigra' bell-man Percy, `sourcastic', `categ- lory', 'tufts' — a puzzler this; in fact Percyese for 'traits'. The tall nervous resi- dent who, before leaving the hotel, sub- jected himself to a two-minute scrutiny, one eye pressed to the mirror, the other to the wall beside it. The Woman Who, in the eccentric Chelsea lifts, Talked to God: `when God speaks', she announced coldly, `the restaurants close'. The rats and cock- roaches; the huge pet toucan which the composer of Tubby the Tuba kept in his studio and which, when a quartet played Beethoven live, would watch with one eye and 'then begin, at a carefully selected moment, to clack its beak like a metro- nome, keeping ruthlessly to its own rhythm, and causing the musicians to stumble and lose their way.' The nightman who'd lost his proof-reading job by allow- ing 'six prancing horses' to appear as 'six prancing whores'. Crossed lines on the Chelsea's over-loaded and frequently un- manned switchboard — 'hellos' in unison. `Long distance!' Operator!"Get off!"No, you get off!' Faggot!"Creep!"Son of a bitch!' Why don't you wear a dress instead of pants?' The equally overloaded Chelsea electric wiring, with behind a church pew the fifth-floor fuse box which overheated unless cooled by an old rattling groaning fan, prudently chained like a motorbike to the water pipes.

All this is pretty hilarious and would be more so if one essential ingredient of farce were not missing: a settled and ordered background of respectability and pompous. outrage. Reporting a weirdo's vague aspiration to sell chestnuts in the street, Florrie muses, 'Did it matter what she meant? The whole point of the Chelsea, it seemed to me, and our reason for loving it, was that we accepted without questioning.' Precisely: people and phenomena which are accepted without questioning become blurred, indistinct and unmemorable. The arrival at the Chelsea of Aunt Agatha, say, or Sir Roderick Glossop would, I think, have heightened the artistic effect and sharpened things up wonderfully.