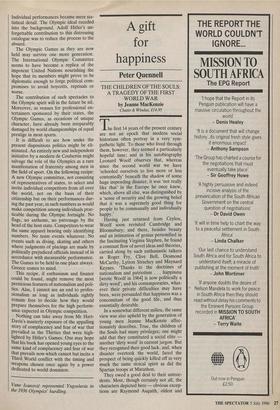 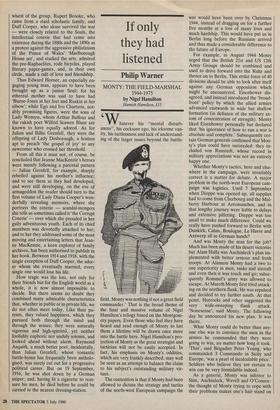 A gift for happiness

THE CHILDREN OF THE SOULS: A TRAGEDY OF THE FIRST WORLD WAR by Jeanne MacKenzie

The first 14 years of the present century are not an epoch that modern social historians often portray in a very - sym- pathetic light. To those who lived through them, however, they seemed a particularly hopeful time; and in his autobiography Leonard Woolf observes that, whereas since the second world war we have `schooled ourselves to live more or less contentedly' beneath the shadow of some huge impending disaster, it was 'not really like that' in the Europe he once knew, which, above all else, was distinguished by a 'sense of security and the growing belief that it was a supremely good thing for people to be communally and individually happy.'

Having just returned from Ceylon, Woolf soon revisited Cambridge and Bloomsbury; and there, besides beauty and an intimation of genius personified in the fascinating Virginia Stephen, he found a constant flow of novel ideas and theories, carried along by such enthusiastic talkers as Roger Fry, Clive Bell, Desmond McCarthy, Lytton Strachey and Maynard Keynes. 'Thanks to the doctrines of nationalism and patriotism . . . happiness [wrote Woolf in 1964] is now politically a dirty word'; and his contemporaries, what- ever their private difficulties may have been, were persuaded that happiness was a concomitant of the good life, and thus essentially desirable. In a somewhat different milieu, the same view was also upheld by the generation of young men Jeanne MacKenzie affec- tionately describes. True, the children of the Souls had many privileges; one might add that they constituted a social elite another 'dirty word' in current jargon. But they recognised their good luck, and, when disaster overtook the world, faced the prospect of being quickly killed off in very much the same stoical spirit as did the Spartan troops at Marathon.

They owed a good deal to their antece- dents. Most, though certainly not all, the characters depicted here — obvious excep- tions are Raymond Asquith, oldest and wisest of the group, Rupert Brooke, who came from a staid scholastic family, and Duff Cooper, who alone survived the war — were closely related to the Souls, the intellectual coterie that had come into existence during the 1880s and the 1890s as a protest against the aggressive philistinism of the Prince of Wales' Marlborough House set', and studied the arts, admired the pre-Raphaelites, rode bicycles, played literary paper-games, and, in their own circle, made a cult of love and friendship.

Thus Edward Horner, an especially en- gaging young man, appears to have been brought up as a junior Soul; for his ethereal mother was said to have had 'Burne-Jones at her feet and Ruskin at her elbow'; while Ego and No Charteris, not- ably promising figures, were the sons of Lady Wemyss, whom Arthur Balfour and the rakish poet Wilfrid Scawen Blunt are known to have equally adored. As for Julian and Billie Grenfell, they were the offspring of Lady Desborough, a hostess apt to preach 'the gospel of joy' to any newcomer who crossed her threshold.

From all this it must not, of course, be concluded that Jeanne MacKenzie's heroes were merely following a patental pattern — Julian Grenfell, for example, sharply rebelled against his mother's influence; and to see them as they had developed, and were still developing, on the eve of armageddon the reader should turn to the first volume of Lady Diana Cooper's won- derfully revealing memoirs, where she portrays the coterie — scandal-mongers she tells us sometimes called it 'the Corrupt Coterie' — over which she presided in her gaily adventurous youth. Each of its chief members was devotedly attached to her; and to her they addressed some of the most moving and entertaining letters that Jean- ne MacKenzie, a keen explorer of family archives, has been authorised to publish in her book. Between 1914 and 1918, with the single exception of Duff Cooper, the ador- er whom she eventually married, every single one would lose his life.

How tragic was the loss, not only for their friends but for the English world as a whole, it is now almost impossible to decide. But there seems no doubt they combined many admirable characteristics that, whether in public or in private life, we do not often meet today. Like their pa- rents, they valued happiness, which they pursued both through the mind and through the senses; they were naturally vigorous and high-spirited, yet neither foolishly euphoric nor unduly solemn, and looked ahead without alarm. Raymond Asquith, a much better poet, incidentally, than Julian Grenfell, whose romantic battle-hymn has frequently been antholo- gised, was surely cut out for a progressive political career. But on 19 September, 1916, he was shot down by a German sniper; and, having lit a cigarette to reas- sure his men, he died before he could be carried to the nearest dressing-station.