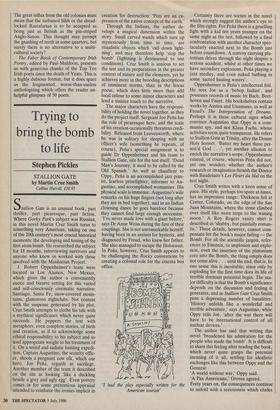 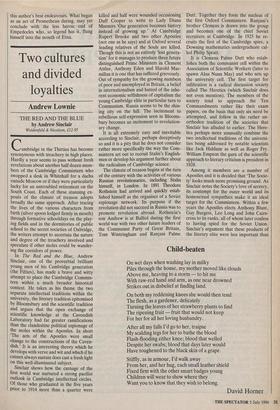 Trying to bring the bomb to life

Stallion Gate is an unusual book, part thriller, part picaresque, part fiction. Where Gorky Park's subject was Russian, in this novel Martin Cruz Smith turns to something very American, taking on one of the 20th century's most crucial historical moments: the developing and testing of the first atom bomb. He researched the subject for 18 months, interviewing survivors and anyone who knew or worked with those involved with the Manhattan Project.

J. Robert Oppenheimer's team were located in Los Alamos, New Mexico, which gives the author a conveniently exotic and bizarre setting for this varied and self-consciously cinematic narrative: Santiago, Santa Fe, snow-covered moun- tains, glamorous nightclubs. Not content with the suspense generated by his plot, Cruz Smith attempts to clothe his tale with a mythical significance which never quite succeeds. He peppers the text with metaphors, even complete stories, of birth and creation, as if to acknowledge some ethical responsibility to his subject and so lend appropriate weight to his treatment of it. On a weird and sadistic hunting expedi- tion, Captain Augustino, the security offic- er, shoots a pregnant cow elk, which our hero, Joe Pena, regards as sacrilege. Another member of the team is described on the site as looking 'like a duckling beside a grey and ugly egg'. Even pottery comes in for some pretentious appraisal intended to reinforce the ironies implicit in creation for destruction: 'Pots are an ex- pression of the native concept of the earth.'

Through the Indians, the author de- velops a magical dimension within the story. Small carved wands which turn up mysteriously from time to time, are ritualistic objects which 'call down light- ning', and may therefore help `stop the bomb' (lightning is detrimental to test conditions). Cruz Smith is anxious to set the test and its preparations in the greater context of nature and the elements, yet he achieves more in the brooding descriptions of imminent storms, than in the hocus pocus, which does little more than add local colour to some minor characters and lend a sinister touch to the narrative.

The major characters have the responsi- bility of holding the novel together, as they do the project itself. Sergeant Joe Pena has the role of picaresque hero, and the scale of his creation occasionally threatens credi- bility. Released from Leavenworth, where he was in solitary for sleeping with an officer's wife (something he repeats, of course), Petia's special assignment is to guide Dr Oppenheimer and his team to Stallion Gate, site for the test itself. 'Dead Man's Journey, it used to be called by the Old Spanish.' As well as chauffeur to Oppy, Pena is an accomplished jazz pian- ist, fearless prizefighter, informer to Au- gustino, and accomplished womaniser. His physical scale is immense. Augustino's wife remarks on his huge fingers (not long after they are in bed together), and in an Indian clowning dance he goes barefoot because they cannot find large enough moccasins. `I've never made love with a giant before,' says Dr Anne Weiss during the first of their couplings. She is not unremarkable herself, having been in an asylum for hysteria, and diagnosed by Freud, who knew her father. She also managed to escape the Holocaust. In Pena, however, Cruz Smith appears to be challenging the Rocky conventions by creating a colossal role for the cinema box office.

`I had the play especially written for the American tourists' Certainly there are scenes in the novel which strongly suggest the author's eye to the film rights. For Pena there is a gruelling fight with a kid ten years younger on the same night as the test, followed by a final confrontation with another character spec- tacularly enacted next to the Bomb just before countdown. A convoy carrying plu- tonium drives through the night despite a serious accident, whilst at other times we have secondary explosions, Pena playing a jazz medley, and even naked bathing in some 'sacred healing waters'.

He sees Joe as a `bebop Indian', and possesses records of music by Bach, Beet- hoven and Faurd. His bookshelves contain works by Austen and Unamuno, as well as Freud's The Interpretation of Dreams.

Perhaps it is these cultural signs which convince Augustino that Oppy is a com- munist spy, and not Klaus Fuchs, whose activities• seem quite transparent. He refers to Stallion Gate as Trinity, after the Donne Holy Sonnet. 'Batter my heart three per- son'd God . . .', yet another allusion to enrich the narrative's scope. Oppenheimer existed, of course, whereas Pena did not, yet one wonders whether the author's research or imagination furnish the Doctor with Baudelaire's Les Fleurs du Mal on the test night.

Cruz Smith writes with a keen sense of pace. His style, perhaps too spare at times, has an impressive range: 'Darkness fell at Cortez, Colorado, on the edge of the San Juan Mountains, where the stone climbed over itself like worn steps to the waning moon.' A Roy Rogers vanity shirt is described as `shabby, but painfully roman- tic.' These details, however, cannot com- pensate for the book's major failing — the Bomb. For all the scientific jargon, refer- ences to Einstein, to implosion and explo- sion, even the insertion of the plutonium core into the Bomb, the thing simply does not come alive . . . until the end, that is. In one sense this is inevitable, since only by exploding for the first time does its life of terrible dormant potential begin. The ma- jor difficulty is that the Bomb's significance depends on the discussion and feeling it generates, and in Stallion Gate Cruz Smith pens a depressing number of banalities: `History unfolds like a wonderful and terrible adventure,' says Augustino, while Oppy tells Joe, 'after the war there will have to be international control of all nuclear devices.'

The author has said that writing this novel 'broadened his admiration for the people who made the bomb'. It is difficult to share this feeling after reading the book, which never quite grasps the potential meaning of it all, settling for idealistic exchanges like this between Oppy and the General: `A world without war,' Oppy said.

Forty years on, the consequences continue to unfold with a seriousness which eludes this author's best endeavours. What began as an act of Promethean daring, may yet conclude with the less heroic end of Empedocles who, so legend has it, flung himself into the mouth of Etna.