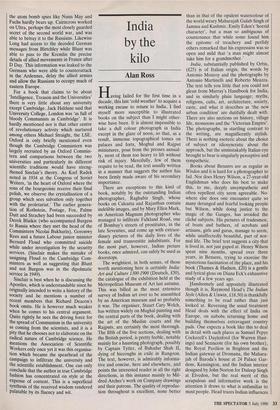 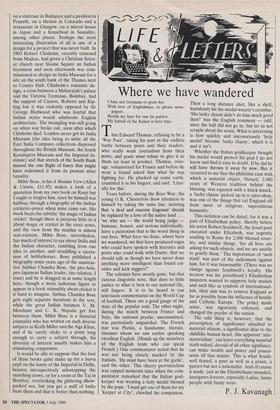 India by the kilo

There are exceptions to this kind of book, notably by the outstanding Indian photographer, Raghubir Singh, whose books on Calcutta and Rajasthan contain indelible images, and by Mary Ellen Mark, an American Magnum photographer who managed to infiltrate Falkland Road, one of Bombay's streets of prostitutes, in the late Seventies, and come up with extraor- dinary pictures of the daily lives of the female and transvestite inhabitants. For the most part, however, Indian picture books, once admired, can safely be used as doorstops. The weightiest, in both senses, of those worth mentioning here is certainly India: Art and Culture 1300-1900 (Deutsch, £50), the catalogue of the exhibition held at the Metropolitan Museum of Art last autumn. This was billed as the most extensive survey of Indian art ever to be assembled by an American museum and so probably it was. The organiser, Stuart Cary Welch, has written widely on Mughal painting and the central parts of the book, dealing with the art of the Muslim courts and the Rajputs, are certainly the most thorough. The fifth of the five sections, dealing with the British period, is pretty feeble, notable mainly for a haunting photograph, possibly by Captain Tytler, of Bahadur Shah II, dying of hiccoughs in exile in Rangoon. The text, however, is admirably informa- tive and concise, here and elsewhere, and points the interested reader in all the right directions, in this instance mainly to Mil- dred Archer's work on Company drawings and their patrons. The quality of reproduc- tion throughout is excellent, none better than in that of the opulent watercolour of the world weary Maharajah Gulab Singh of Jammu and Kashmir, Emily Eden's 'horrid character', but a man so ambiguous of countenance that while some found him the epitome of treachery and perfidy others remarked that his expression was so open and mild that 'a man might almost take him for a grandmother.'

India, substantially published by Orbis, (i25) is of Italian origin, the words by Antonio Monroy and the photographs by Antonio Martinelli and Roberto Meazza. The text tells you little that you could not glean from Murray's Handbook for India, and in similarly plain language; myths, religions, cults, art, architecture, society, caste, and what it describes as 'the new urban condition' are dutifully dealt with. There are also sections on history, village life, monsoons and the 'Victorian Empire'. The photographs, in startling contrast to the writing, are magnificently stylish. There is nothing esoteric about the choice of subject or idiosyncratic about the approach, but the unmistakably Italian eye brought to bear is singularly perceptive and sympathetic.

Books about Benares are as regular as Wisden and it is hard for a photographer to fail. Nor does Henry Wilson, a 27-year-old Englishman who does his best to make this, to me, deeply unsympathetic and often repellent city seem agreeable. No- where else does one encounter quite so many deranged and fearful looking people but Wilson, while doing justice to the magic of the Ganges, has avoided the cliché subjects. His pictures of tradesmen, of boats and bathers, of acrobats and artisans, girls and gurus, manage to seem, while unaffectedly beautiful, part of nor- mal life. The brief text suggests a city that is lived in, not just gaped at. Henry Wilson spent nine months, spread over three years, in Benares, trying to exorcise the mysterious fascination of the place, and his book (Thames & Hudson, £20) is a gentle and lyrical gloss on Diana Eck's exhaustive study of a few years ago.

Handsomely and appositely illustrated though it is, Raymond Head's The Indian Style (Allen & Unwin, £18.50) is thankfully something to be read rather than just looked at. Reversing the usual treatment Head deals with the effect of India on Europe, on nabobs returning home and building themselves extravagant country pads. One expects a book like this to deal in detail with such places as Samuel Pepys Cockerell's Daylesford (for Warren Hast- ings) and Sezincote (for his own brother), the Royal Pavilion in Brighton and the Indian gateway at Dromana, the Mahara- jah of Baroda's house at 24 Palace Gar- dens, Kensington, and the Indian interior designed by John Norton for Duleep Singh at Elvedon, but the real merit of this scrupulous and informative work is the attention it draws to what is unfamiliar to most people. Head traces Indian influences on a staircase in Budapest and a pavilion in Penarth, on a theatre in Colorado and a restaurant in Glasgow, on a mirror house in Japan and a houseboat in Sausalito, among other places. Perhaps the most interesting illustration of all is one of a design for a project that was never built. In 1903 Robert Chisholm, recently returned from Madras, had given a Christian Scien- ce church near Sloane Square an Indian treatment and soon afterwards was com- missioned to design an India Museum for a site on the south bank of the Thames next to County Hall. Chisholm's romantic de- sign, a cross between a Maharajah's palace and the Victoria Terminus, Bombay, had the support of Curzon, Roberts and Kip- ling but it was violently opposed by Sir George Birdwood who was fearful that Indian styles would adulterate English architecture. The wrangling was still going on when war broke out, soon after which Chisholm died. London never got its India Museum (the idea being to unite all the East India Company collections dispersed throughout the British Museum, the South Kensington Museum and the Imperial In- stitute) and that stretch of the South Bank missed the one flight of fancy that might have redeemed it from its present utter banality.

Mihir Bose, in his A Maidan View (Allen & Unwin, £11.95) makes a hash of a quotation from my own book on Ranji but I ought to forgive him, since he himself was halfway through a biography of the Indian cricketer-prince when mine came out. His book bears the subtitle 'the magic of Indian cricket' though there is precious little in it about magic or cricket in the strict sense, and the view from the maidan is almost non-existent. Mihir Bose, nevertheless, has much of interest to say about India and the Indian character, rambling from one idea to another, and straddling a succes- sion of hobbyhorses. Bose published a biography some years ago of the unattrac- tive Subhas Chandra Bose, the pro-Axis, pro-Japanese Indian leader, (no relation, I trust) and he is dragged in at some length here, though a more ludicrous figure to appear in a book ostensibly about cricket it is hard to imagine. Subhas Chandra Bose gets eight separate mentions in the text, while the great Indian batsmen V. M. Merchant and C. K. Nayadu get five between them. Mihir Bose is a financial journalist who has written on such diverse subjects as Keith Miller and the Aga Khan, and if he rarely sticks to a point long enough to carry a subject through, his diversity of interest usually makes him a stimulating companion.

It would be idle to suppose that the best of these books quite make up for a burra pegh on the lawns of the Imperial in Delhi, bearers introspectively sidestepping the snatching crows, or for a room at the Taj in Bombay, overlooking the glittering dhow- packed sea, but you get a sniff of India from them and that is better than nothing.