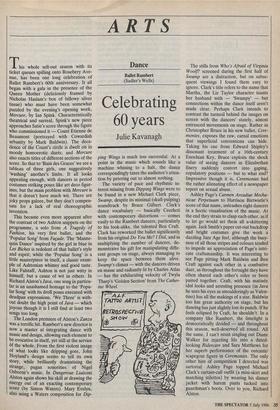 This whole sell-out season with its ticket queues spilling onto Rosebery Ave- nue, has been one long celebration of Ballet Rambert's 60th anniversary. It all began with a gala in the presence of the Queen Mother (deliciously framed by Nicholas Haslam's box of billowy silver tissue) who must have been somewhat puzzled by the evening's opening work, Mercure, by Ian Spink. Characteristically theatrical and surreal, Spink's new piece approaches Satie's score through the figure who commissioned it — Count Etienne de Beaumont (portrayed with Cowardish urbanity by Mark Baldwin). The deca- dence of the Count's circle is dwelt on in moody homoerotic duets; and Mercure also enacts titles of different sections of the score. So that to 'Bain des Graces' we see a tableau of three girls, one suggestively `washing' another's limbs. It all looks appealing enough, with dancers in period costumes striking poses like art deco figur- ines, but the main problem with Mercure is that it doesn't have much wit. There are joky props galore, but they don't compen- sate for a lack of real choreographic invention.

This became even more apparent after the contrast of two Ashton snippets on the programme, a solo from A Tragedy of Fashion, his very first ballet, and the `Popular Song' from Façade. The 'Manne- quin Dance' inspired by the girl in blue in Les Biches is redolent of that ballet's style and esprit; while the 'Popular Song' is a little masterpiece in itself, a classic exam- ple of Ashtonian whimsy and good taste. Like Falstaff, Ashton is not just witty in himself, but a cause of wit in others. In Richard Alston's Java, one song in particu- lar is an unashamed homage to the 'Popu- lar Song' with its droll poses executed with deadpan expressions. 'We Three' is with- out doubt the high point of Java — which joyous though it is I still find at least two songs too long.

The London premiere of Alston's Zanza was a terrific hit. Rambert's new director is now a master at integrating dance with music and design, allowing each element to be evocative in itself, yet still at the service Of the whole. From the first violent image of what looks like dripping gore, John Hoyland's design seems to tell its own story, while brilliantly dramatising the strange, pagan sonorities of Nigel Osborne's music. In Dangerous Liaisons Alston again shows his skill at drawing the energy out of an exacting contemporary score (by Simon Waters). Mary Evelyn, also using a Waters composition for Dip- ping Wings is much less successful. At a point in the music which sounds like a machine whining to a halt, the dance correspondingly taxes the audience's atten- tion by petering out to almost nothing.

The variety of pace and rhythmic in- terest missing from Dipping Wings were to be found in a new Michael Clark piece, Swamp, despite its minimal (skull-pulping) soundtrack by Bruce Gilbert. Clark's dance vocabulary — basically Ceccheti with contemporary distortions — comes easily to the Rambert dancers, particularly to his look-alike, the talented Ben Craft. Clark has reworked the ballet significantly from his original Do You Me? I Did, and in multiplying the number of dancers, de- monstrates his gift for manipulating diffe- rent groups on stage, always managing to keep the space between them alive. Swamp's climax — with the dancers driven en masse and radiantly lit by Charles Atlas — has the exhilarating velocity of Twyla Tharp's 'Golden Section' from The Cather- ine Wheel. The stills from Who's Afraid of Virginia Woolf? screened during the first half of Swamp are a distraction, but on subse- quent viewings I found them easy to ignore. Clark's title refers to the name that Martha, the Liz Taylor character taunts her husband with — 'Swampy' — but connections within the dance itself aren't made clear. Perhaps Clark intends to contrast the turmoil behind the images on screen with the dancers' stately, almost entranced movements on stage. Rather as Christopher Bruce in his new ballet, Cere- monies, exposes the raw, carnal emotions that superficial conventions can hide. Taking his cue from Edward Shipley's dissonant treatment of a 16th-century Enochian Key, Bruce exploits the shock value of seeing dancers in Elizabethan finery suddenly contort into gaping, copulatory positions — but to what end? Impressive though it is, Ceremonies had the rather alienating effect of a newspaper report on sexual abuse.

Ashley Page's Carmen Arcadiae Mecha- nicae Perpetuum to Harrison Birtwistle's score of that name, unleashes eight dancers in a hectic visualisation of the music. At the end they strain to clasp each other, as if to let go would set them all a-skittering again. Jack Smith's paper cut-out backdrop and bright costumes give the work a dazzling Jazz Age feel, although the busy- ness of all those stripes and colours tended to impede an appreciation of Page's intri- cate craftsmanship. It was interesting to see Page pitting Mark Baldwin and Ben Craft against each other in a combative duet, as throughout the fortnight they have often shared each other's roles or been paired together. Craft, with his matinee idol looks and arresting presence (in Java he uses his eyes as smoulderingly as Valen- tino) has all the makings of a star. Baldwin too has great authority on stage, but his dancing has just slightly lost its punch. If he feels eclipsed by Craft, he shouldn't. In a company like Rambert, the limelight is democratically divided — and throughout this season, well-deserved all round. All the same, I can't resist singling out Diane Walker for injecting life into a dated- looking Ridercare and Sara Matthews for her superb performance of the outcaste/ scapegoat figure in Ceremonies. The only other hint of competition I detected was sartorial: Ashley Page topped Michael Clark's curtain-call outfit (a mini-skirt and matching stilettos) by wearing his dinner jacket with harem pants tucked into guardsman's boots. Over to you, Richard Alston.