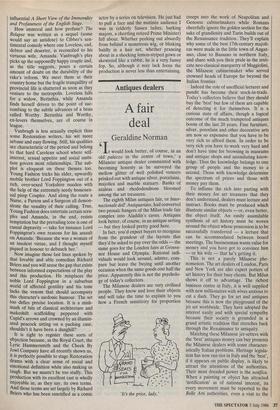 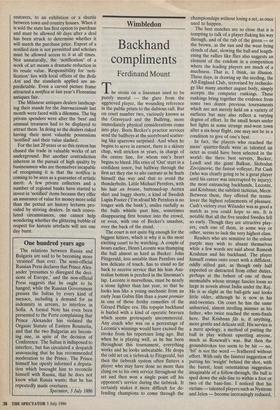 It would look better, of course, in an old palazzo in the centre of town,' a Milanese antique dealer commented with becoming honesty as he surveyed the mellow glitter of well polished veneers prinked out with antique silver, porcelains, majolica and marble statuary. Banks of azaleas and rhododendrons bloomed among the art treasures. The eighth Milan antiques fair, or Inter- nazionale dell' Antiquariato, had converted two prosaic hangers of the Milan trade fair complex into Aladdin's caves. Antiques look better, of course, in an antique setting — but they looked pretty good here.

In fact, you'd expect buyers to recognise from the grandeur of the layouts that they'd be asked to pay over the odds — the same goes for the London fairs at Grosve- nor House and Olympia. Rational indi- viduals would look around, admire, com- pare but leave the buying until another occasion when the same goods cost half the price. Apparently this is not the psycholo- gy of today's collectors. The Milanese dealers are very civilised people. They know and love their objects and will take the time to explain to you how a French sensitivity for proportion `It's the price, lady.' creeps into the work of Neapolitan and Genoese cabinetmakers while Romans cheerfully ignore the golden section for the sake of grandiosity and Turin builds out of the Renaissance tradition. They'll explain why some of the best 17th-century majoli- cas were made in the little town of Angar- ano, close to Bassano in northern Italy, and share with you their pride in the intri- cate neo-classical marquetry of Maggiolini, the Milanese cabinetmaker who served crowned heads of Europe far beyond the Italian frontier.

Indeed the role of unofficial lecturer and pundit has become their stock-in-trade. Today's collectors believe that they should buy the 'best' but few of them are capable of detecting it for themselves. It is a curious state of affairs, though a logical outcome of the much trumpeted antiques boom of the last 20 years. Fine furniture, silver, porcelain and other decorative arts are now so expensive that you have to be very rich to afford them. In order to be very rich you have to work very hard and don't have time for browsing in museums and antique shops and assimilating know- ledge. Thus the knowledge belongs to one group of people and the money to a second. Those with knowledge determine the spectrum of prices and those with money pay them.

To inflame the rich into parting with their money for art treasures that they don't understand, dealers must lecture and instruct. Books must be produced which illustrate similar objects — or, even better, the object itself. An easily assimilable synthesis of art history must be woven around the object whose possession is to be successfully transferred — a lecture that can be accommodated between board meetings. The businessman wants value for money and you have got to convince him — or his wife — that he's getting it.

This is not a purely Milanese phe- nomenon. The art dealers of London, Paris and New York are also expert potters of art history for their busy clients. But Milan shows it off to advantage. The richest business centre in Italy, it is well supplied with new millionaires with wives anxious to cut a dash. They go for art and antiques because this is now the playground of the jet set worldwide. They have adopted the interest easily and with special sympathy because their society is grounded in a grand artistic tradition that stretches back through the Renaissance to antiquity.

Matching these Milanese jet-setters with the 'best' antiques money can buy presents the Milanese dealers with some character- istically Italian problems. Heritage legisla- tion has now run riot in Italy and the 'best', if it appears on public display, is likely to attract the attentions of the authorities. Their most dreaded power is the natifica. When a painting or object has attracted `notification' as of national interest, its every movement must be reported to the Belle Arti authorities, even a visit to the restorers, to an exhibition or a shuttle between town and country houses. When it is sold the state has first option to purchase and must be allowed 60 days after a deal has been struck to determine whether it will match the purchase price. Export of a notified item is not permitted and scholars must be allowed access to it at all times. Not unnaturally, the 'notification' of a work of art means a dramatic reduction in its resale value. Responsibility for 'noti- fication' lies with local offices of the Belle Arti and the standards applied are un- predictable. Even a carved picture frame attracted a notifica at last year's Florentine antiques fair.

The Milanese antiques dealers landscap- ing their stands for the Internazionale last month were faced with a dilemma. The big private spenders were after the 'best' and unusual treasures had to be displayed to attract them. In doing so the dealers risked having their most valuable possessions `notified' and their value slashed.

For the last 20 years or so this system has chased the trade in valuable works of art underground. But another contradiction inherent in the pursuit of high quality by businessmen who are themselves incapable of recognising it is that the notifica is coming to be seen as a guarantee of artistic merit. A few private collectors and a number of regional banks have started to invest in 'notified' items because they offer an assurance of value for money more solid than the potted art history lectures pro- vided by striving dealers. In such convo- luted circumstances, one cannot help wondering whether the glittering bubble of respect for historic artefacts will not one day burst.