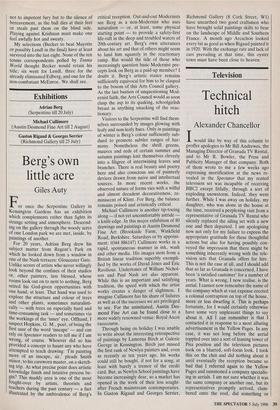 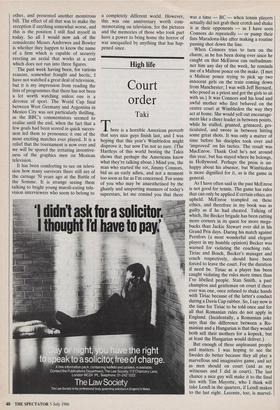 Iwould like by way of this column to proffer apologies to Mr Bill Andrewes, the Managing Director of Granada TV Rental, and to Mr R. Bowler, the Press and Publicity Manager of that company. Both of them wrote to me a few weeks ago expressing mortification at the news re- vealed in the Spectator that my rented television set was incapable of receiving BBC2 except fitfully, through a sort of exploding snowstorm. Indeed, they went further. While I was away on holiday, my daughter, who was alone in the house at the time, received a perplexing visit from a representative of Granada TV Rental who silently replaced the ailing set with a new one and then departed. I am apologising now not only for my failure to express the appropriate gratitude for these thoughtful actions but also for having possibly con- veyed the impression that there might be something inherently wrong with the tele- vision sets that Granada offers for hire. This is not the case at all, and I should add that so far as Granada is concerned, I have been 'a satisfied customer' for a number of years. What is wrong, I now realise, is the aerial. I cannot now remember the name of the company which at vast expense erected a colossal contraption on top of the house, more or less dwarfing it. This is perhaps fortunate, for I would certainly otherwise have some very unpleasant things to say about it. All I can remember is that I contacted it in response to a most alluring advertisement in the Yellow Pages. In any case, it was not long before the aerial toppled over into a sort of leaning tower of Pisa position and the television pictures took on a blurred, soft-focus look. I took this on the chin and did nothing about it until eventually the reception became so bad that I referred again to the Yellow Pages and summoned a company specialis- ing in aerials. I am not sure whether it was the same company or another one, but its representatives promptly arrived, clam- bered onto the roof, did something or other, and presented another monstrous bill. The effect of all that was to make the reception if anything somewhat worse, and this is the position I still find myself in today. So all I would now ask of the considerate Messrs Andrewes and Bowler is whether they happen to know the name of a firm which is capable of securely erecting an aerial that works at a cost which does not run into three figures.

The past week having been, for various reasons, somewhat fraught and hectic, I have not watched a great deal of television, but it is my impression from reading the lists of programmes that there has not been a lot worth watching unless one is a devotee of sport. The World Cup final between West Germany and Argentina in Mexico City was not particularly thrilling, as the BBC's commentators seemed to realise until the end, when the fact that a few goals had been scored in quick succes- sion led them to pronounce it one of the most exciting matches ever played. It is a relief that the tournament is now over and we will be spared the irritating inventive- ness of the graphics men on Mexican television.

It has been comforting to see on televi- sion how many survivors there still are of the carnage 70 years ago at the Battle of the Somme. It is strange seeing them talking to bright young muesli-eating tele- vision interviewers who seem to belong to a completely different world. However, this was one anniversary worth com- memorating on television, for the pictures and the memories of those who took part have a power to bring home the horror of war unequalled by anything that has hap- pened since.