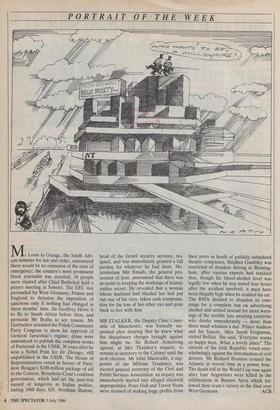 Mr Louis la Grange, the South Afri- can minister for law and order, announced there would be no remission of the state of emergency; the country's most prominent black journalist was arrested; 34 people were injured after Chief Buthelezi held a prayer meeting in Soweto. The EEC was persuaded by West Germany, France and England to threaten the imposition of sanctions only if nothing had changed in three months' time. Sir Geoffrey Howe is to fly to South Africa before then, and persuade Mr Botha to see reason. Mr Gorbachev attended the Polish Communist Party Congress to show his approval of General Jaruzelski's regime; plans were announced to publish the complete works of Pasternak in the USSR, 30 years after he won a Nobel Prize for Dr Zhivago, still unpublished in the USSR. The House of Representatives voted in favour of Presi- dent Reagan's $100-million package of aid to the Contras. Benedetto Craxi's coalition government, which had set the post-war record of longevity in Italian politics, lasting 1060 days, fell. Avraham Shalom, head of the Israeli security services, res- igned, and was immediately granted a full pardon for whatever he had done. Ho- jatoleslam Mir Emadi, the general pro- secutor of Iran, announced that there was no point in keeping the workings of Islamic justice secret. He revealed that a woman whose husband had blinded her had put out one of his eyes, taken cash compensa- tion for the loss of her other eye and gone back to live with him.

MR STALKER, the Deputy Chief Const- able of Manchester, was formally sus- pended after denying that he knew what the disciplinary charges brought against him might be. Sir Robert Armstrong agreed, at Mrs Thatcher's request, to remain as secretary to the Cabinet until the next election. Mr John Macreadie, a sup- porter of the Militant Tendency, was elected general secretary of the Civil and Public Services Association: an inquiry was immediately started into alleged electoral improprieties. Peter Hall and Trevor Nunn were accused of making huge profits from their posts as heads of publicly subsidised theatre companies. Stephen Gumbley was convicted of drunken driving in Birming- ham, after various experts had testified that, though his blood-alcohol level was legally low when he was tested four hours after the accident involved, it must have been illegally high when he crashed his car. The BMA decided to abandon its cam- paign for a complete ban on advertising alcohol and settled instead for stem warn- ings of the terrible fate awaiting everyone who drinks immoderately — more than three small whiskies a day. Prince Andrew and his fiancee, Miss Sarah Fergusson, visited Belfast. She said, 'Everyone seems so happy here. What a lovely place!' The citizens of the Irish Republic voted over- whelmingly against the introduction of civil divorce. Mr Richard Branson crossed the Atlantic in record time in a power boat. The death toll in the World Cup rose again after four Argentines were killed in the celebrations in Buenos Aires which fol- lowed their team's victory in the final over