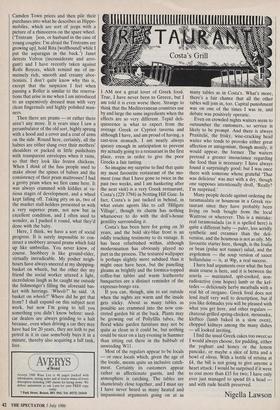 I AM not a great lover of Greek food.

True, I have never been to Greece, but I am told it is even worse there. Strange to think that the Mediterranean countries use by and large the same ingredients when the effects are so very different. Tepid deli- quescence is what to expect from the cast-iron stomach, I am nearly always queasy enough in anticipation to prevent my actually going to a restaurant in the first place, even in order to give the poor Greeks a fair tasting.

So imagine my surprise to find that quite my most favourite restaurant of the mo- ment (one that I have gone to twice in the past two weeks, and I am hankering after the next visit) is a very Greek restaurant, Costa's (229 3794) in Notting Hill Gate. In fact, Costa's is just tucked in behind, in what estate agents like to call `Hillgate Village', though its charm has nothing whatsoever to do with the doll's-house gentility surrounding it. Costa's has been here for going on 30 years, and the bold sky-blue front is an oddly touching testimony to its vintage. It has been refurbished within, although modernisation has obviously played no part in the process. The textured wallpaper is perhaps slightly more subdued than it might once have been, but the panelling gleams as brightly and the formica-topped coffee-bar tables and warm leatherette banquettes are a distinct reminder of the expresso-bongo era. If you can, though, aim to eat outside when the nights are warm and the inside gets sticky. About as many tables as possible are crammed into the now con- creted garden bit at the back. Plants may be growing out of Pollyfilla tubes, the florid white garden furniture may not be quite as clean as it could be, but nothing could be nicer on a lazy evening in Summer than sitting out there in the hubbub of unwinding W11.

Most of the regulars appear to be locals — or once locals which, given the age of the locale, means quite an inclusive catch- ment. Certainly its customers appear rather as affectionate guests, and the atmosphere is catching. The tables are shamelessly close together, and I must say I have never heard as many heated and impassioned arguments going on at as many tables as in Costa's. What's more, there's a fair chance that all the other tables will join in, too. Capital punishment was on one of the times I was in, and debate was positively operatic. Even on crowded nights waiters seem to outnumber the customers, so service is likely to be prompt. And there is always Praxitelii, the frisky, wise-cracking head waiter who tends to provoke either great affection or antagonism, though mostly, it would appear, the former. The waiters pretend a greater insouciance regarding the food than is necessary: I have always found it surprisingly good; but I was once there with someone whose grateful 'That was delicious' was met with a dry, though one supposes intentionally droll, 'Really? I'm surprised.'

Many people decide against ordering the taramasalata or houmous in a Greek res- taurant since they have probably been living on both bought from the local Waitrose or wherever. This is a mistake: real taramosalada (as it is spelled here) is quite a different baby — paler, less acridly synthetic and creamier than the deli- version, and the houmous is not as oily. My favourite starter here, though, is the foulia or bean (pulse not runner) salad, and the avgolemon — the soup version of sauce hollandaise — is, at 90p, a real success.

I have had arguments over what the best main course is here, and it is between the souvla — marinated, spit-cooked, non- radioactive (one hopes) lamb or the kef- tedes — deliciously herby meatballs with a real hit of oregano. Greek food does not lend itself very well to description, but if you like dolmades you will be pleased with what you get here, and other regulars charcoal-grilled spring-chicken, moussaka, kleftico (lamb baked in a slow oven), chopped kidneys among the many dishes — all looked inviting.

I find the usual Greek cakes too sweet so I would always choose, for pudding, either the yoghurt and honey or the lemon pancake, or maybe a slice of fetta and a bowl of olives. With a bottle of retsina at £4, the bill is not going to give anyone a heart attack: I would be surprised if it were to cost more than £15 for two; I have only ever just managed to spend £6 a head and with rude health preserved.