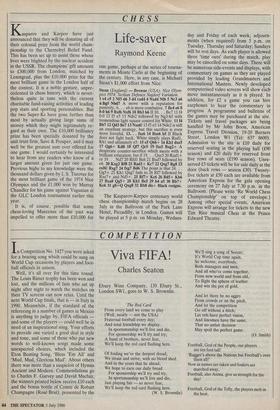 Kasparov and Karpov have just announced that they will be donating all of their colossal prize from the world cham- pionship to the Chernobyl Relief Fund. This has been set up to assist those whose lives were blighted by the nuclear accident in the USSR. The champions' gift amounts to £300,000 from London, matched by Leningrad, plus the £10,000 prize for the most brilliant game in the London half of the contest. It is a noble gesture, unpre- cedented in chess history, which is never- theless quite in tune with the current charitable fund-raising activities of leading pop stars and sporting personalities. But the two Super-Ks have gone further than most by actually giving large sums of money which they might legitimately re- gard as their own. The £10,000 brilliancy prize has been specially donated by the unit trust firm, Save & Prosper, and it may well be the greatest sum ever offered for one game. I would certainly be interested to hear from any readers who know of a larger amount given for just one game. Previous highs to my knowledge were the thousand dollars given by I. S. Turover for the most brilliant game of the 1974 Nice Olympics and the £1,000 won by Murray Chandler for his game against Vaganian at the GLC London tournament earlier this year.

It is, of course, possible that some chess-loving Maecenas of the past was impelled to offer more than £10,000 for one game, perhaps at the series of tourna- ments in Monte Carlo at the beginning of the century. Here, in any case, is Michael Stean's $1,000 effort from Nice:

The Kasparov-Karpov centenary world chess championship match begins on 28 July in the Ballroom of the Park Lane Hotel, Piccadilly, in London. Gaines will be played at 5 p.m. on Monday, Wednes- day and Friday of each week; adjourn- ments (when required) from 5 p.m. on Tuesday, Thursday and Saturday; Sundays will be rest days. As each player is allowed three 'time outs' during the match, play may be cancelled on some days. There will be numerous side-events and displays, with commentary on games as they are played provided by leading Grandmasters and International Masters. Newly developed computerised video screens will show each move instantaneously as it is played. In addition, for £2 a game you can hire earphones to hear the commentary in progress. A programme and bulletins of the games may be purchased at the site. Tickets and travel packages are being handled by Mr John Boon, American Express Travel Division, 19-20 Berners Street, London W1 (Tel: 637 8600). Admission to the site is £10 daily for reserved seating in the playing hall (£90 season) and £20 daily for reserved front five rows of seats (£190 season). Unre- served £3 tickets will be for sale daily at the door (back rows — season £30). Twenty- five tickets at £50 each are available from American Express for the gala opening ceremony on 27 July at 7.30 p.m. in the Ballroom. (Please write 'Re World Chess Championship' on top of envelope.) Among other special events, American Express will arrange for tickets to the new Tim Rice musical Chess at the Prince Edward Theatre.