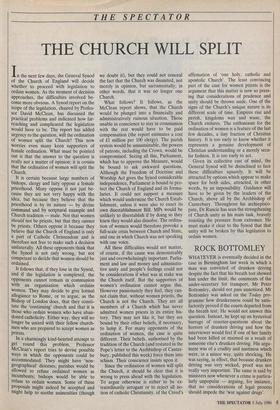 THE CHURCH WILL SPLIT

n the next few days, the General Synod I of the Church of England will decide whether to proceed with legislation to ordain women. As the moment of decision approaches, the difficulties involved be- come more obvious. A Synod report on the 'scope of the legislation, chaired by Profes- sor David McClean, has discussed the practical problems and indicated how far- reaching and complicated the legislation would have to be. The report has added urgency to the question, will the ordination of women split the Church? This now worries even many keen supporters of female ordination. What must be pointed out is that the answer to the question is really not a matter of opinion: it is certain that the ordination of women will split the Church.

It is certain because large numbers of bishops, clergy and laity oppose a female priesthood. Many oppose it not just be- cause they are not very happy with the idea, but because they believe that the priesthbod is by its nature — by divine command and by scriptural example and Church tradition — male. Not that women should not be priests, but that they cannot be priests. Others oppose it because they believe that the Church of England is only a part of Catholic Christendom and is therefore not free to make such a decision unilaterally. All these opponents think that the Synod is not only wrong, but not competent to decide that women should be ordained.

It follows that, if they lose in the Synod, and if the legislation is completed, the opponents cannot remain in communion with an organisation which ordains women. They may decide to give formal allegiance to Rome, or to argue, as the Bishop of London does, that they consti- tute the 'continuing' church and that it is those who ordain women who have aban- doned catholicity. Either way, they will no longer be united with their fellow church- men who are prepared to accept women as priests.

In a charmingly kind-hearted attempt to get round this problem, Professor McClean's report tries to devise possible ways in which the opponents could be accommodated. They might have 'non- geographical' dioceses; parishes would be allowed to refuse ordained women as incumbents; bishops would be able to refuse to ordain women. Some of these proposals might indeed be accepted and might help to soothe animosities (though we doubt it), but they could not conceal the fact that the Church was disunited, not merely in opinion, but sacramentally; in other words, that it was no longer one Church.

What follows? It follows, as the McClean report shows, that the Church would be plunged into a financially and administratively ruinous situation. Those unable in conscience to stay in communion with the rest would have to be paid compensation (the report estimates a cost of £1 million per 100 clergy). The parish system would be unsustainable, the powers of patrons, including the Crown, would be compromised. Seeing all this, Parliament, which has to approve the Measure, would be bound to ask awkward questions. Although the Freedom of Doctrine and Worship Act gives the Synod considerable independence, Parliament is bound to pro- tect the Church of England and its formu- laries. It could not support a measure which would undermine the Church Estab- lishment, unless it were also to enact its own disestablishment Bill. MPs would be unlikely to disestablish if by doing so they knew they would also dissolve. The ordina- tion of women would therefore provoke a full-scale crisis between Church and State, and one in which Church was not speaking with one voice.

All these difficulties would not matter, of course, if the cause was demonstrably just and overwhelmingly important. Parlia- ment and law and money and administra- tive unity and people's feelings could not be considerations if what was at stake was the Church itself. But the supporters of women's ordination cannot argue this. However passionately they feel, they can- not claim that, without women priests, the Church is not the Church. They are all members of a Church which has never admitted women priests in its entire his- tory. They may not like it, but they are bound by their other beliefs, if necessary, to lump it. For many opponents of the ordination of women, the case is quite different. Their beliefs, authorised by the tradition of the Church (and restated in the Pope's letter to the Archbishop of Canter- bury, published this week) force them into schism. Their conscience insists upon it.

Since the ordination of women will split the Church, it should be clear that it is wrong to press ahead with the legislation. To argue otherwise is either to be ex- traordinarily arrogant or to reject all no- tion of catholic Christianity, of the Creed's affirmation of 'one holy, catholic and apostolic Church'. The least convincing part of the case for women priests is the argument that this matter is now so press- ing that considerations of prudence and unity should be thrown aside. One of the signs of the Church's unique nature is its different scale of time. Empires rise and perish, kingdoms wax and wane, the Church endures. The enthusiasm for the ordination of women is a feature of the last few decades, a tiny fraction of Christian history. It is too early to know whether it represents a genuine development of Christian understanding or a merely secu- lar fashion. It is too early to act.

Given its collective cast of mind, the General Synod will be disinclined to face these difficulties squarely. It will be attracted by options which appear to make space for both sides, attracted, in other words, by an impossibility. Guidance will have to be given by the leaders of the Church, above all by the Archbishop of Canterbury. Throughout his archiepisco- pate, Dr Runcie has seen the strengthening of Church unity as his main task, bravely resisting the pressure from extremes. He must make it clear to the Synod that that unity will be broken by this legislation to ordain women.