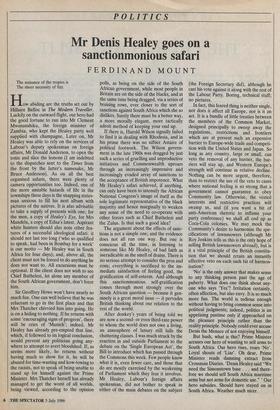 The nuisance of the tropics is The sheer necessity of fizz.

How abiding are the truths set out by Hillaire Belloc in The Modern Traveller. Luckily on the outward flight, our hero had the good fortune to run into Mr Clement Mwananshiku, the foreign minister of Zambia, who kept the Healey party well supplied with champagne. Later on, Mr Healey was able to rely on the services of Labour's deputy spokesman on foreign affairs, Mr Donald Anderson, to open the tonic and slice the lemons (I am indebted to the dispatches sent to the Times from the front by the latter's namesake, Mr Bruce Anderson). As on all the best organised safaris, there were plenty of camera opportunities too. Indeed, one of the more amiable hazards of life in the townships these days is the snapping states- man anxious to fill his next album with pictures of the natives. It is also advisable to take a supply of presents with one; for the men, a copy of Healey's Eye, for Mrs Mandela, a copy of Edna's latest. Aspirant white hunters should also note other fea- tures of a successful ideological safari: it should not last too long ('who so qualified to speak, had been in Bombay for a week' is our motto — Mr Healey was in South Africa for four days); and, above all, the client must not be forced to do anything he does not want to. All excursions must be optional. If the client does not wish to see Chief Buthelezi, let alone any member of the South African government, don't force him.

Sir Geoffrey Howe won't have nearly so much fun. One can well believe that he was reluctant to go in the first place and that Mrs Thatcher chivvied him into going. He is on a hiding to nothing. If he returns with some 'encouraging signs of progress', there will be cries of `Munich'; indeed, Mr Healey has already pre-empted that line, which, if followed to its logical conclusion, would prevent any politician going any- where to attempt to avert bloodshed. If, as seems more likely, he returns without having much to show for it, he will be abused for time-wasting and kow-towing to the racists, not to speak of being unable to stand up for himself against the Prime Minister. Mrs Thatcher herself has already managed to get the worst of all worlds, being viewed, according to the opinion polls, as being on the side of the South African government, while most people in Britain are on the side of the blacks, and at the same time being dragged, via a series of bruising rows, ever closer to the sort of sanctions against South Africa which she so dislikes. Surely there must be a better way, a more morally elegant, more tactically adroit method of keeping your end up.

If there is, Harold Wilson signally failed to find it in dealing with Rhodesia, and in his prime there was no niftier Astaire of political footwork. The Wilson govern- ment in the late 1960s was dragged by just such a series of gruelling and unproductive initiatives and Commonwealth uproars through an increasingly impressive and increasingly evaded array of sanctions to the acceptance of British impotence. What Mr Healey's safari achieved, if anything, can only have been to intensify the African National Congress's image of itself as the sole legitimate representative of the black majority and hence marginally to weaken any sense of the need to co-operate with other forces such as Chief Buthelezi and the Zulus. Is that such a good idea?

The argument about the effects of sanc- tions is not a simple one; and the evidence does not all run one way. But one is conscious all the time, in listening to someone like Mr Healey, of bad faith as ineradicable as the smell of drains. There is no serious attempt to consider the pros and cons; everything is sacrificed to the im- mediate satisfaction of feeling good, the gratification of self-esteem. And although this sanctionmonious self-gratification comes through most strongly over the South African question — because it gen- uinely is a great moral issue — it pervades British thinking about our relation to the rest of the world.

After donkey's years of being told we are now a second- or even third-rate power to whom the world does not owe a living, an atmosphere of luxury still lulls the chattering classes. I was much struck by the reaction in and outside Parliament to the debate on the 'Single European Act', the Bill to introduce which has passed through the Commons this week. Few people know what it is, even fewer care, and those that do are mostly exercised by the weakening of Parliament which they fear it involves. Mr Healey, Labour's foreign affairs spokesman, did not bother to speak in either of the main debates on the subject (the Foreign Secretary did), although he cast his vote against it along with the rest of the Labour Party. Boring, technical stuff; no pictures.

In fact, this feared thing is neither single, nor does it affect all Europe, nor is it an act. It is a bundle of little treaties between the members of the Common Market, designed principally to sweep away the regulations, restrictions and frontiers which are at present such an expensive barrier to Europe-wide trade and competi- tion with the United States and Japan. So long as any country, large or small, can veto the removal of any barrier, the bar- riers will stay up, and Western Europe's strength will continue in relative decline. Nothing can be more urgent, therefore, than to restrict the use of the veto to cases where national feeling is so strong that a government cannot guarantee to obey Community law. Otherwise, the vested interests and restrictive practices will swamp us, and (if you want a bit of anti-American rhetoric to inflame your party conference) we shall all end up as Coca-Cola colonies. We may, mock the Community's desire to harmonise the spe- cifications of lawnmowers (although Mr Roy Jenkins tells us this is the only hope of selling British lawnmowers abroad), but is it a vital principle of the British constitu- tion that we should retain an instantly effective veto on each such bit of harmon- isation?

`No' is the only answer that makes sense to any thinking person past the age of puberty. What does one think about any- one who says 'Yes'? Irritation certainly, often affection, but also envy. It is so much more fun. The world is tedious enough without having to bring common sense into political judgments; indeed, politics is an appetising pastime only if approached on the pleasure principle rather than the reality principle. Nobody could ever accuse Denis the Menace of not enjoying himself.

But hush, what is this? Prime Minister accuses our hero of wanting to sell arms to South Africa. Our hero rises, roars 'No'. Loyal shouts of 'Liar'. Oh dear, Prime Minister reads damning extract from Crossman Diaries. 'Denis Healey said "We need the Simonstown base . . . and there- fore we should sell South Africa maritime arms but not arms for domestic use." ' Our hero subsides. Should have stayed on in South Africa. Weather much nicer.