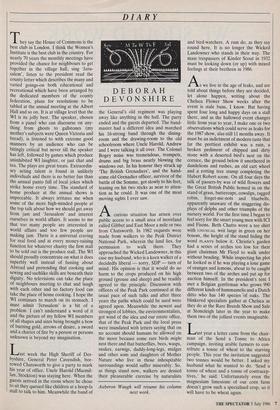 DEBORAH DEVONSHIRE They say the House of Commons is the best club in London. I think the Women's Institute is the best club in the country. For nearly 70 years the monthly meetings have provided the chance for neighbours to get together in the village hall, sing 'Jeru- salem', listen to the president read the county letter which describes the many and varied goings-on both educational and recreational which have been arranged by the dedicated members of the county federation, plans for resolutions to be tabled at the annual meeting at the Albert Hall and so on. It is at village level that the WI is its jolly best. The speaker, chosen from a panel who can discourse on any- thing from ghosts to gallstones (my mother's subjects were Queen Victoria and bread), is listened to with extreme good manners by an audience who can be bitingly critical but never till the speaker has left, followed by games which produce uninhibited WI laughter, or just chat and tea. The plays are great treats. Extraordin- ary acting talent is found in unlikely individuals and there is no better fun than the annual panto full of local jokes which strike home every time. The standard of home produce at the annual shows is impeccable. It always irritates me when some of the more high-minded people at the top talk about how we should get away from jam and 'Jerusalem' and interest ourselves in world affairs. It seems to me that too many people are interested in world affairs and too few people are making jam. There is a universal craving for real food and at every money-raising function for whatever charity the first stall to be sold out is the produce stall. The WI should proudly concentrate on what it does superbly well instead of fussing about Abroad and pretending that cooking and sewing and suchlike skills are beneath their dignity. No televisions can take the place of neighbours meeting to chat and laugh with each other and no factory food can take the place of home cooking. I hope the WI continues to march on its stomach. I must admit 'Jerusalem' is a bit of a problem. I can't understand a word of it and the picture of my fellow WI members of all shapes and sizes being brought a bow of burning gold, arrows of desire, a sword and a chariot of fire by a person or persons unknown is beyond my imagination.

Last week the High Sheriff of Der- byshire, General Peter Cavendish, bor- rowed Chatsworth to give a party to mark his year of office. Uncle Harold (Macmil- lan, Stockton) was staying here. When the guests arrived in the room where he chose to sit they queued like children at a hoop-la stall to talk to him. Meanwhile the band of the General's old regiment was playing away like anything in the hall. The party ended and the guests departed. The band- master had a different idea and marched his 16-strong band through the dining- room and the drawing-room to the old schoolroom where Uncle Harold, Andrew and I were talking it all over. The Colonel Bogey noise was tremendous, trumpets, drums and big brass nearly blowing the windows out. In his honour they struck up `The British Grenadiers', and the hand- some old Grenadier officer, survivor of the battle of the Somme, got slowly to his feet, leaning on his two sticks as near to atten- tion as he could. It was one of the most moving sights I ever saw.

Acurious situation has arisen over public access to a small area of moorland called Gibbet and East Moor a mile or two from Chatsworth. In 1982 requests were made from walkers to the Peak District National Park, wherein the land lies, for permission to walk there. They approached the Wicked Landowner, in this case my husband, who is a keen walker of a decidedly liberal — sorry, SDP — turn of mind. His opinion is that it would do no harm to the crops produced on his high ground (grouse and sheep) and he readily agreed to the principle. Discussion with officers of the Peak Park continued at the usual pace of such talks and after three years the paths which could be used were agreed upon. Meanwhile the newest and strongest of lobbies, the environmentalists, got wind of the idea and our estate office, that of the Peak Park and the local press were inundated with letters saying that on no account should humans be allowed on the moor because some rare birds might nest there and that butterflies, bees, wasps, snakes, earwigs, daddy-long-legs, midges and other sons and daughters of Mother Nature who live in those inhospitable surroundings would suffer miserably. So, as things stand now, walkers are denied their pleasurable exercise by naturalists and bird-watchers. A rum do, as they say round here. It is no longer the Wicked Landowner who stands in their way. The mass trespassers of Kinder Scout in 1932 must be looking down (or up) with mixed feelings at their brethren in 1986.

As we live in the age of leaks, and are told about things before they are decided, let alone happen, writing about the Chelsea Flower Show weeks after the event is stale buns, I know. But having spent four long and happy days on a stall there, and as the hallowed event changes little from year to year, I make one or two observations which could serve as leaks for the 1987 show, alas still 11 months away. It must be an indictment of modern taste that far the prettiest exhibit was a ruin, a broken pediment of chipped and dirty stone with a deserted bird's nest on the cornice, the ground below it smothered in dandelions and rushes, an old cart wheel and a rotting tree stump completing the Hubert Robert scene. On all four days the talk of passers-by was of wild flowers and the Great British Public homed in on the stand of grass, buttercups, cowslips, ragged robin, forget-me-nots and bluebells, apparently unaware of the staggering dis- plays of delphs and other triumphs of the nursery world. For the first time I began to feel sorry for the smart young men with ICI and Fisons. Beth Chatto wore a tee shirt with UNUSUAL writ large in green on her bosom, the height of the stand hiding the word PLANTS below it. Christie's garden had a series of arches too low for their giant chairman Mr Floyd to walk under without bending. While inspecting his plot he looked as if he was playing a lone game of oranges and lemons, about to be caught between two of the arches and put up for auction himself. In the president's tent I met a Belgian gentleman who grows 990 different kinds of hammamelis and a Dutch ditto who has 140 species of oaks. The blinkered specialists gather at Chelsea as they do at the Rare Breeds Show and Sale at Stoneleigh later in the year to make them two of the jolliest events imaginable.

Last year• a letter came from the chair- man of the Send a Tonne to Africa campaign, inviting arable farmers to con- tribute a tonne of wheat to the starving people. This year the invitation suggested two tonnes would be better. I asked my husband what he wanted to do. 'Send a tonne of wheat and a tonne of contracep- tives,' he said. Unfortunately even the magnesium limestone of our corn farm doesn't grow such a specialised crop, so it will have to be wheat again.