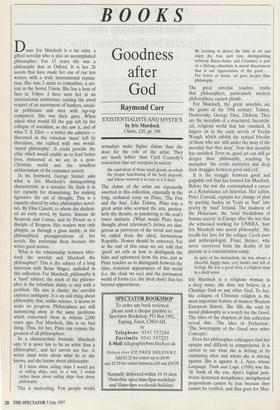 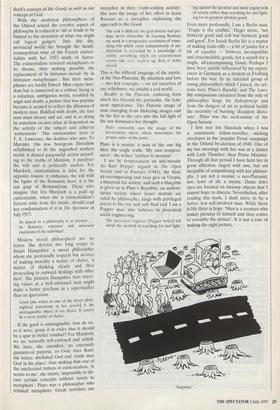 EXISTENTIALISTS AND MYSTICS by Iris Murdoch Chatto, £20, pp. 546 Dame Iris Murdoch is a lay saint, a gifted novelist who is also an accomplished philosopher. For 15 years she was a philosophy don at Oxford. It is her 26 novels that have made her one of our few writers with a truly international reputa- tion. She was, I seem to remember, a set- text in the Soviet Union. She has a host of fans in Tokyo. I have seen her at an international conference earning the awed respect of an assortment of bankers, social- ist politicians and men with lap-top computers. She was their guru. When asked what would fill the gap left by the collapse of socialism, as she saw it, and of what T. S. Eliot — a writer she admires discerned as the valueless 'mess' left by liberalism, she replied with two words: `moral philosophy'. It could provide the ethic which would enable us to lead better lives, immersed as we are in a post- Christian world and the mindless utilitarianism of the consumer society.

In his foreword, George Steiner asks what is Iris Murdoch's distinguishing characteristic as a novelist. He finds it in her capacity for dramatising, for making figurative the act of thought. This is a capacity shared by other philosopher novel- ists. By Elias Canetti, to whom she dedicat- ed an early novel, by Sartre, Simone de Beauvoir and Camus, and by Proust as a disciple of Bergson. Her readers may only glimpse, as through a glass darkly, at the philosophical presuppositions of her novels. She entertains them because she writes good stories.

What is the relationship between Mur- doch the novelist and Murdoch the philosopher? This is the subject of a long interview with Brian Magee, included in this collection. For Murdoch, philbsophy is a 'hard' subject; the mark of the philoso- pher is the relentless ability to stay with a problem. His aim is clarity; the: novelist explores ambiguity. It is an odd thing about philosophy that, unlike science, it seems to make no progress. Philosophers are still hammering away at the same problems which concerned them in Athens 2,000 years ago. For Murdoch, this is no bad thing. Thus, for her, Plato can remain the greatest of all philosophers.

In a characteristic boutade, Murdoch says 'it is more fun to be an artist than a philosopher', and her novels are fun. A writer must write about what he or she knows, and she knows about philosophy:

This is misleading. Few people would nowadays make higher claims than she does for the role of the artist. They are much loftier than Cyril Connolly's conviction that art occupies in society

the equivalent of those small glands on which the proper functioning of the body depends, and whose removal is as easy as it is fatal.

The claims of the artist are repeatedly asserted in this collection, especially in the long, technical essay on Plato, 'The Fire and the Sun'. Like Tolstoy, Plato was a great artist who scorned the arts, particu- larly the theatre, as pandering to the soul's lower instincts. (What would Plato have thought about television?) Artists are dan- gerous as purveyors of the trivial and must be exiled from the ideal, harmonious Republic. Homer should be censored. Yet at the end of this essay we are told that `good' art tells us how to distinguish the false and ephemeral from the true, just as Plato teaches us to distinguish between the false, transient appearances of this world (i.e. the chair we see) and the permanent world of forms (i.e. the ideal chair) that lies beyond appearances.

By learning to detect the false in art and enjoy the true part (say, distinguishing between Burne-Jones and Cezanne) is part of a lifelong education in moral discernment that is our appreciation of the good . . . For better or worse, art goes deeper than philosophy.

It is the struggle between good and palpable evil that has formed Iris Murdoch. Before the war she contemplated a career as a Renaissance art historian. Her editor, Peter Conradi, explains her change of plan by quoting Auden on Yeats as 'hurt' into poetry by 'mad' Ireland. The madness of the Holocaust, the 'total breakdown of human society' in Europe after the war that she witnessed working for UNRRA, 'hurt Iris Murdoch into moral philosophy'. She recalls her love for the refugee Czech poet and anthropologist, Franz Steiner, who never recovered from the deaths of his parents in a concentration camp:

In spite of his melancholy, he was always a cheerful, happy man, very tender and full of feeling. He was a good man, a religious man in a deep sense.

Iris Murdoch is a religious woman in a deep sense; she does not believe in a Christian God or any other God. To her, the collapse of Christian religion is the most important feature of modern Western European history. She fills the void by moral philosophy as a search for the Good. The titles of the chapters of this collection reveal this: 'The Idea of Perfection', `The Sovereignty of the Good over other Concepts'.

Even her philosopher colleagues find her opaque and difficult to comprehend. It is easiest to see what she is driving at by examining what and whom she is driving against. She is against A. J. Ayer, whose Language, Truth and Logic (1936) was the `in' book of the era. Ayer's logical posi- tivism destroyed metaphysics; metaphysical propositions cannot be true because they cannot be verified, and that goes for Mur- doch's concept of the Good, as well as our concept of God. With the analytical philosophers of the Oxford school the creative aspect of

philosophy is reduced to 'nil or tends to be limited to the invention of what one might call logical gadgets'. Into this dry, provincial world she brought the heady. cosmopolitan wine of the French existen tialists with her 1953 study of Sante. The existentialists restored metaphysics to its throne, thus making possible the replacement of 'la !literature morale' by `la littdrature metaphysique'. But their meta- physics are fatally flawed. Man enjoys free dom but is immersed as a solitary being in a valueless, ambiguous world. troubled by angst and doubt, a picture that was popular because it seemed to reflect the dilemma of modern man. Riddled with doubt, the free man must choose and act, and in so doing he somehow creates value as dependent on the activity of the subject and achieves `authenticity'. The existentialist hero is T. E. Lawrence, the doubter who acts. To Marxists, this was bourgeois liberalism refurbished to fit the anguished modern world; it denied purposeful action accord mg to the truths of Marxism, it paralyses the will and is politically useless. For Murdoch, existentialism is false for the opposite reason: it enthrones the will with the figure of the Romantic hero: it is the last gasp of Romanticism. Those who imagine that Iris Murdoch is a paid up existentialist, when she is existentialism's fiercest critic from the inside, should read her condemnation of it in The Spectator of July 1957:

Its appeal as a philosophy is at present .. its dramatic, romantic and antisocial exaltation of the individual.

Modern moral philosophers are no better. She devotes two long essays to Stuart Hampshire, a moral philosopher whom she profoundly respects but accuses of making morality a matter of choice, 'a matter of thinking clearly and then proceeding to outward dealings with other men'. She pictures Hampshire man select- ing values as a well-informed man ought make a better purchase in a supermarket than an ignoramus.

Good [she writes in one of the direct philo is sophical statements in her novels] s the unimaginable object of our desire. It cannot be a mere matter of choice.

If the good is unimaginable, how do we, as it were, grasp it in order that it should be a spur to better conduct? For Murdoch, we are naturally self-enclosed and selfish. We have, she considers, no externally guaranteed purpose, no God, since Kant, she writes, abolished God and 'made man God in his place', thus making him one of the intellectual fathers of existentialism. 'It seems to me', she insists, 'impossible to dis- cuss certain concepts without resort to metaphors'. Plato was a philosopher who relished metaphors. Great novelists use

metaphor in their 'truth-seeking activity'. She uses the image of her eftbrt to learn Russian as a metaphor explaining the appr oach to the Good: The task is difficult, the goal distant and per- haps never attainable. In learning Russian, my work is a progressive revelation of some- thing else which exists independently of me. Attention is rewarded by a knowledge of reality, something which my consciousness cannot take over. SN alio% up, deny or make unseat.

This is the difficult language of the mystic, of the Neo-Platonist. By attention and love - two key concepts we rid ourselves of our selfishness, we inhabit a real world.

Reality is, the Platonic, enduring form which lies beyond the particular, the tran- sient appearance. The Platonic image of man emerging from flickering images cast by the fire in the cave into the full light of the sun dominates her thought:

Plato constantly uses the image of the harmonious whole which determines the proper order of the parts.

Plato is a monist, a man of the one big idea, the single truth. 'My own tempera- ment'. she writes. Inclines to monism'.

I am by temperament an anti-monist. As Karl Poppet argued in The Open Society and its Enemies (1945), the final, all-encompassing end must give us Utopia, a blueprint for society, and such a blueprint is given us in Plato's Republic, an authori- tarian society where lesser mortals are ruled by philosopher kings with privileged access to the one and only final end. I am a Popper man who believes in piecemeal social engineer ing:

Even more profoundly, I am a Berlin man. `Tragic is the conflict,' Hegel wrote, 'not between good and evil but between good and good'. For Isaiah Berlin life is a matter of making trade-offs — a bit of justice for a bit of equality — between incompatible and irreconcilable goods, not a search for a single, all-encompassing Good. Perhaps I have been unduly influenced by my experi- ences in Germany as a student at Freiburg before the war. In an informal group of young philosophers which I joined, the set- texts were Plato's Republic and The Laws. My companions extracted from the rule of philosopher kings the fiirherptinzip and from the dangers of art to political health the necessity of burning 'decadent litera- ture'. Plato was the arch-enemy of the Open Society.

I first met Iris Murdoch when I was a communist fellow-traveller, sticking envelopes in the 'popular Front' campaign in the Oxford by-election of 1948. One of my last meetings with her was at a dinner with Lady Thatcher, then Prime Minister. Through all that period I have held her in great affection, tinged with awe, but am incapable of sympathising with her philoso- phy. I am not a monist, a neo-Platonist, nor, least of all, a mystic. Dame Iris's eyes are focused on faraway objects that I cannot hope to discern. Nevertheless, after reading this book, I shall strive to be a better, less self-involved man. While there is life there is hope. 'Man is a creature who makes pictures of himself and then comes to resemble the picture'. It is just a case of making the right picture.