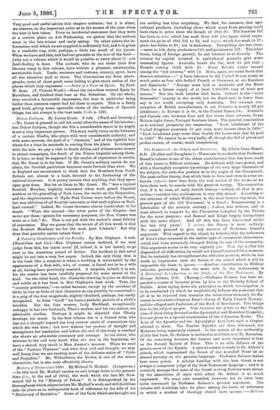 A Country Gentleman and his Family. By Mrs. Oliphant. 3

vols. (Macmillan and Co.)—Mrs. Oliphant seems inclined, if we may judge from this, her latest novel (if, indeed, it is her latest), to go over to the American school of fiction. The incident in this novel might be put into a very few pages. Indeed, the only thing that is in the least like a surprise is when a wedding is interrupted by the appearance of a first wife, who, of course, is found not to be a wife at all, having been previously married. A surprise, indeed, it is not, for the reader has been carefully prepared for some secret of the kind. On the other hand, the character-drawing is quite as delicate and subtle as it has been in Mrs. Oliphant's best work. Theo, the "country gentleman,"—so called because, except by the accident of birth, he has as little of that character as can possibly be conceived— is a prig of the first magnitude, slightly idealised, perhaps, but easily recognised. In little " Geoff " we have a pathetic picture of a child's troubles. But the four women, Lady Merkland, exceptionally unhappy in her two husbands, Theo's mother, and his two sisters, are admirable studies. Perhaps it might be objected that Chatty develops too much. In the first volume she is a formal miss, who has not a thought beyond the very narrow circle of conventions into which she was born ; but love wakens her powers of thought and strengthens her resolution, and before the end of the story is reached she shows an admirable constancy and courage. In her sister, who remains to the end very much what she was in the beginning, we have a sketch very much in Miss Austen'a manner. When we read of the " Eastace Thynnes," and what they said and thought, we may well fancy that we are reading some of the delicate satire of "Pride and Prejudice." Mr. Wilberforce, the Rector, is one of the minor characters, but is also most effectively drawn.