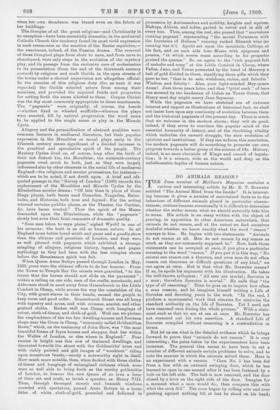 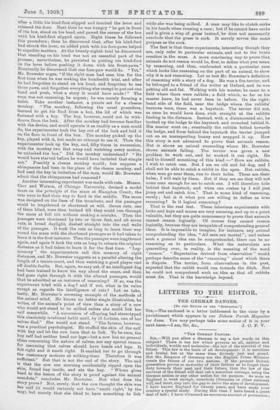 TRE June number of McClure's Magazine contains a curious and interesting article by Mr. E. T. Brewster entitled "The Animal Mind from the Inside." It is interest- ing because it gives a number of ascertained facts as to the behaviour of different animals placed in particular circum- stances; curious because occasionally it is difficult to determine whether the writer means what we should naturally take him to mean. His article is an essay written with the object of proving, in opposition to other American naturalists, that animals do not reason, and at the outset we find ourselves doubtful whether we know exactly what the word "reason" conveys to him. He begins with two statements. "Animals do not reason at all. Men do not reason by any means as much as they are commonly supposed to." Now, both those statements can be accepted at once, if you give a particular meaning to the word "reason." If you put it in this way, "No animal can reason out a theorem, and even men do not often reason out theorems or difficult questions of any kind," we can agree at once. But is that what Mr. Brewster means? If so, be spoils his argument with his illustration. He takes the well-known syllogism : "All men are mortal; Socrates is a man; therefore Socrates is mortal." He calls that "the type of all reasoning." Then be goes on to inquire bow often a man reasons, and he imagines himself writing a Life of Socrates and devoting years to the work. "In the end, I produce a monumental work that remains for centuries the standard authority on the life of Socrates. Yet I need not have reasoned once during the whole process." With a state- ment such as that we are at sea at once. Mr. Brewster has not reasoned out his own assertion. A standard Life of Socrates compiled without reasoning is a contradiction in terms.

But let us see what is the detailed evidence which he brings forward to prove that "animals do not reason." It is very interesting ; the pains taken by the experimenters have been immense. The general idea seems to have been to set a number of different animals certain problems to solve, and to note the manner in which the animals solved them. Here is an experiment with a racoon. "Coon No. 5 has been fed from a box with an outward swinging door, which he has learned to open in one second after it has been fastened by a bolt on the left aide. The bolt is now removed, and the door closed by a lever on the right side of the door. Imagine for a moment what a man would do; then compare this with what the coon did." The coon began by rolling over and over pushing against nothing till at last he stood on his head; after a little hie hind-foot slipped and touched the lever and released the door. Next time be was hungry "he got in front of the box, stood on his head, and pawed the corner of the box until hie hind-foot slipped again. Eight times he followed this procedure ; then be discovered that, after his bind-foot bad struck the lever, an added push with his fore-paws helped to expedite matters. At the twenty-eighth trial he discovered that standing on his Lead was not an essential part of the protege ; neverthelees, he persisted in putting his bind-foot on the lever before pushing it down with his front-paws." Eventually he discovered that one fore-paw would do. "Yet," Mr. Brewster urges, "if the right man had seen him for the first time when he was making the hundredth trial, and after he had forgotten to stand on his head, and forgotten to use three paws, and forgotten everything else except to put out one Land and push, what a story it would have made I" The coon was not reasoning, he argues ; he was merely forming a habit. Take another instance, a puzzle set for a rhesus monkey. "The monkey, following the usual procedure, learned to get his food from a box, the lid of which was fastened with a key. The key, however, could not be with- drawn from the lock. After the monkey had become familiar with the device, and could operate it as readily as a man could do, the experimenter took the key out of the lock and laid it on the floor in front of the box. The monkey picked up the key, played with it, but made no attempt to use it. Then the experimenter took up the key, and, fifty times in succession, with the monkey two feet away and watching every motion, he unlocked the box." Did the monkey understand ? "He would have starved before he would have imitated that simple act." Possibly a rhesus monkey would; but suppose a chimpanzee had been in the place of the rhesus monkey, and had used the key in imitation of the man, would Mr. Brewster admit that the chimpanzee had reasoned ?

Another interesting experiment was made with rats. Messrs. Carr and Watson, of Chicago University, devised a model maze on the principle of the maze at Hampton Court; the rats were to find their way to food in the middle. The maze Was designed on the lines of the trombone, and the passages could be lengthened or shortened at will. Seven rats, one of them blind, were then trained till they could run through the maze at full tilt without making a mistake. Then the passages were shortened by two or three feet, and all seven rats, in broad daylight, dashed straight into the end walls of the passages. It took the rats as long to learn their way round the maze with the shortened passages as it had taken to learn it in the first instance. Then the passages were lerigthened again, and again it took the rats as long to relearn the original distance as it had taken to learn it for the first time. "Leg- memory " the experimenters call this memory of right distances, and Mr. Brewster suggests as a parallel altering the length of a tennis-court, and then watching a good player reel off double faults. But, again, we may ask, if an intelligent dog had been trained to know his way about the maze, and then had gone right through it with the altered passages, would that be admitted as an instance of reasoning? If so, was the experiment tried with a dog ? and if not, what is its value except as regards the intelligence of rats Let us take, lastly, Mr. Brewster's crowning example of the methods of the animal mind. He knows no better single illustration, he writes, of the animal's point of view than a story of a cow who would not stand to be milked unless she could lick her calf meanwhile. "A succession of offspring had stereotyped this absolutely irrational habit until, by ill fortune, one of her calves died." She would not stand. "The farmer, however, was a practical psychologist. He stuffed the akin of the calf with hay and let the cow have that to lick. To be sure, the bay calf had neither head nor legs—but a cow has no general ideas concerning the nature of calves, nor any special reason for assuming that calves should have heads and legs. It felt right and it smelt right. It enabled her to go through the customary motions at milking-time. Therefore it was sufficient." But that is not the end of the story. The end is that the cow one morning accidentally ripped open the skin, found hay inside, and ate the hay. "Whole) gives heed to the lesson of the story is proof against the animal anecdote," concludes Mr. Brewster. But what does the story prove ? Not, surely, that the cow thought the akin was her calf (it would certainly not have "smelt right," by the way), but merely that she liked to have something to lick

while she was being milked. A man may like to clutch corks in his hands when running a race; but if he cannot have corks and is given a wisp of grass- instead, he does not necessarily conclude that the grass is cork. It merely serves the same purpose as the cork.

The fact is that these experiments, interesting though they are, only refer to particular animals, and not to the brae creation in the mass. A more convincing way to prove that animals do not reason would be, first, to define what you mean by reasoning, and then, confronted with a particular case which looks like reasoning on the part of an animal, to show why it is not reasoning. Let us test Mr. Brewster's definition of reasoning with a story of a dog. He was a fox-terrier, and he belonged to a friend of the writer at Oxford, and he was getting old and fat. Walking with his master, he came to a field where there were rabbits ; a field which, so far as his master knew, he had never been in before. On the right- hand side of the field, near the hedge where the rabbits' burrows were, there was a haystack. The terrier did not, as once he would have done, rush straight at the rabbits feeding in the distance. Instead, with a disinterested air, he trotted up the hedge to the haystack and crouched behind it. His master went on; eventually the rabbits bolted towards the hedge, and from behind the haystack the terrier jumped out on an unsuspecting bunny and snapped it up. Now this story is not advanced to prove that animals reason.

But it shows an animal succeeding where Mr. Brewster shows animals failing. The terrier was given a new problem to work out, and he worked it out right. Ho said to himself something of this kind :—" Here are rabbits.

I wish to catch one. But I ant an old and fat dog, and I shall not be able to catch a rabbit in the open. But rabbits, when men go near them, run to their holes. These are their holes; I will wait by them. But if they see me they will not come near enough for me to catch one. I will therefore hide behind that haystack, and when one rushes by I will just jump out and catch him." That is some kind of reasoning, surely ; but is it what you are willing to define as true reasoning ? Is it logical reasoning ?

That is the real test. These laborious experiments with locks and keys and mazes are very amusing, and up to a point valuable, but they are quite unnecessary to prove that animals cannot reason logically. Of course they cannot reason logically, because they are incapable of comprehending general ideas. It is impossible to imagine, for instance, any animal comprehending the idea, "All men are mortal " ; and unless such a general idea can be comprehended, there can be no reasoning as to particulars. What• the naturalists are quarrelling over, in reality, is the meaning of the word "reason." "Expectation derived from observation" would perhaps describe some of the "reasoning' about which there is dispute. The • terrier; from observations in the past, expected that the rabbit would run towards the ditch. But he could not comprehend such an idea as that all rabbits must die. That is the knowledge beyond.