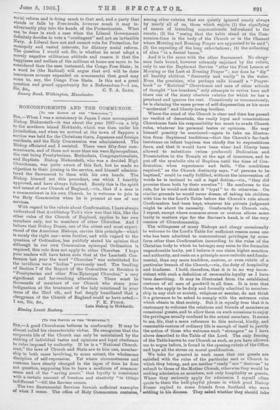 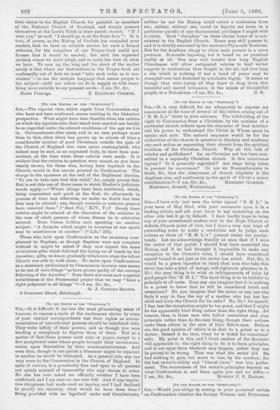 in conformity. It may be almost called his characteristic virtue. He recognises that the corporate life of the Church can only be maintained by the sinking of individual tastes and opinions and loyal obedience to rules imposed by authority. If he is a "National Church- man," the laws of Church and State are to him one, member- ship in both cases involving, to some extent, the wholesome discipline of self-repression. Yet where circumstances and customs have clearly changed in the lapse of time he does not question, supposing him to have a modicum of common- sense and of the "saving grace," that loyalty is consistent with a certain amount of freedom and elasticity "in things indifferent "—till the Reviser comes.

The two Sacramental Services furnish sufficient examples of what I mean. The office of Holy Communion oontaine, among other rubrics that are quietly ignored nearly always by nearly all of us, those which enjoin (1) the signifying of names of intending communicants beforehand to the curate ; (2) the "seeing that the table stand at the Com- munion-time in the body of the Church or in the Chancel where Morning and Evening Prayer are appointed to he said "; (3) the repeating of the long exhortations ; (4) the collecting of alms "in a decent boson."

And it is the same with the other Sacrament. No clergy- man feels bound, however solemnly enjoined by the rubric, only to use the Baptismal Service "after the First Lesson at Morning or the Last at Evening Prayer " ; nor does he "dip" all healthy children "discreetly and warily" in the water. Even the precision, who perhaps calls himself a " Prayer- book " or "Rubrical" Churchman and men of other schools of thought "law-breakers," only attempts to revive here and there one of the many obsolete rubrics for which he has a penchant and ignores the rest. Consciously or unconsciously, be is claiming the same power of self-dispensation as his more " modernist " and liberty-loving brother.

Where the mind of the Church is clear and time has passed no verdict of desuetude, the really loyal and conscientious Churchman feels his responsibility too much to evade Church rules, whatever his personal tastes or opinions. He may himself possibly be convinced—again to take an illustra- tion from Baptismal traditions—that the Church's far-back insistence on infant baptism was chiefly due to superstitious fears, and that it would have been wiser had liberty been allowed to substitute (when preferred) Dedication and Presentation in the Temple at the age of innocence, and to put off the symbolic rite of Baptism until the time of Con- firmation, when repentance and faith, "the conditions required," as the Church distinctly says, "of persons to be baptised," could be really fulfilled, without the intervention of words he is inclined to call a legal fiction,—viz., "they did promise them both by their sureties" I He conforms to the rule, for he would not think it "loyal" to do otherwise. On similar grounds he would never dream of taking his children with him to the Lord's Table before the Church's rule about Confirmation had been kept, whatever his private judgment might be about its necessity. Conformity to Church rule, I repeat, except where common-sense or custom allows some laxity in matters ripe for the Reviser's hand, is of the very essence of Churohmanship.

The willingness of many Bishops and clergy occasionally to welcome to the Lord's Table for sufficient reason some one who has been admitted to communicant privileges by some form other than Confirmation (according to the rules of the Christian body to which he belongs) may seem to the formalist unpardonable laxity, yet I believe it can claim higher sanction and authority, and rests on a principle more catholic and funda- mental, than any mere tradition, custom, or even rubric of a particular branch of the Ohurch,—viz., the duty of hospitality and kindness. I hold, therefore, that it is in no way incon- sistent with such a definition of reasonable loyalty as I have been describing. It may be illustrated from the established customs of all men of goodwill in all time. It is true that those who apply to be duly and formally admitted to member- ship in any club or society, religious or seeular, do not think it a grievance to be asked to comply with the entrance rules which obtain in that society. But it is equally true that it is customary to welcome the relations and friends of members as occasional guests, and to allow them on such occasions to enjoy the privileges usually confined to the actual members. It seems to me, Sir, that a mere reference to this natural, kindly, and reasonable custom of ordinary life is enough of itself to justify the action of those who welcome such " strangers " as I have above described to the Table of the Lord. The only fencing of the Table known to our Church as such, as you have allowed me to argue before, is found in the opening rubric of the Office and lays all the stress on moral qualification. We take for granted in such cases that our guests are satisfied with the rules of the particular sect or Church to which they belong, and are neither "ready "nor " desirous " to submit to those of the Mother Church, otherwise they would be seeking admission as members, not only hospitality as guests. Where they seriously apply for admission I myself often quote to them the half-playful phrase in which good Bishop Fraser replied to some friends from Scotland who were settling in his diocese. They asked whether they should take their status in the English Church for granted, as members of the National Church of Scotland, and simply present themselves at the Lord's Table in their parish church. "If I were you," he said, "I 'Mould go in at the front door" ! It is true, of course, as the Bishop of Carlisle has reminded your readers, that we have no suitable service for such a formal welcome, for the compilers of our Prayer-book could nob foresee that it would be needed; but until the expected revision comes we must adapt, and so make the best of, what we have. To sum up, the long and the short of the matter surely is that where our instructions in the Prayer-book are confessedly out of date we must "take such order as is con- venient "—to use the antique language that seems proper to the subject—until our rulers see fit to supply us with some- thing more suitable to our present needs. am, Sir, &e.,