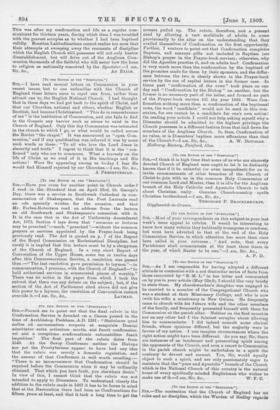 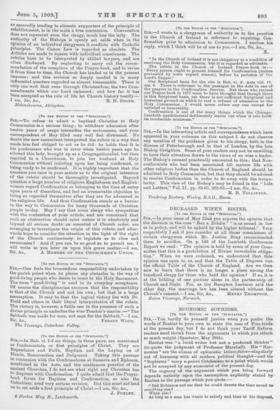 Sra,—The contention that the Church of England has no rules and no discipline, which the Warden of Radley regards

as assuredly tending to alienate supporters of the principle of establishment, is in the main a true contention. Convocation does not represent even the clergy, much less the laity. The authority of the Bishops is openly set aside when in the Opinion of an individual clergyman it conflicts with Catholic Principles. The Canon Law is regarded as obsolete. The Articles are made to square with individual consciences. The rubrics have to be interpreted by skilled lawyers, and are often disobeyed. By neglecting to carry out the recom- mendation of the compilers of the Prayer-book, and to revise it from time to time, the Church has landed us in the present impasse; and this revision so deeply needed is in many Influential quarters regarded as almost treasonable. There is only one writ that runs through Christendom, the two Com- mandments which our Lord endorsed ; and how far it has been accepted as the rule of life let Church history testify.—