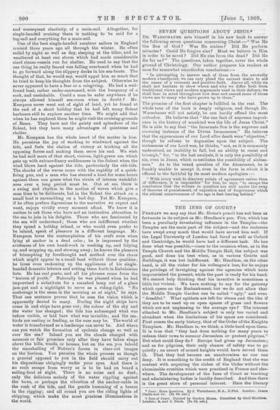 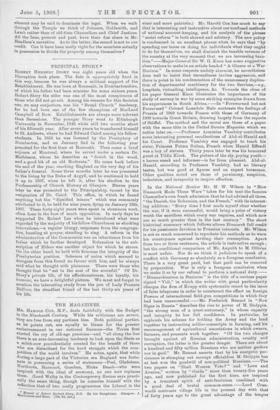 PERHAPS we may say that Mr. Home's pencil has not been as fortunate in its subject as Mr. Headlam's pen. Fire, which liae been a peculiarly devastating influence in the Temples—the Temples are the main part of the Subject—and the eestoreis have swept away much that would have served him well. If the Legal University of London had fared as well as Oxford and Cambridge, he would have had a different task. He has done what was possible,—risen to the occasion when, an in the Temple Church and the Middle Temple Hall, the subject was good, and done his best when, as in various Courts and Buildings, it was but indifferent. Mr. Headlam, on the other hand, is all the richer for his colleague's loss, for he enjoys the privilege of inveighing against the agencies which have impoverished the present, while the past is ready for his hand. We cannot help thinking that his invective is sometimes a little too violent. We have nothing to say for the gateway which opens on the Embankment, but We do not allow that the Middle Temple Garden can be called "ugly," and even "dreadful." What epithets are left for slums and the like if they are to be used up on open spaces of grass and flowers which are not unpleasing to the average eye ? The interest attached to Mr. Headlam's subject is only too varied and abundant when the limitations of his space are considered. First comes the early history, that of the Order of the Knights Templars. Mr. Headlam is, we think, a little hard upon them. It is true that " they had done nothing for many years to redeem their vows to succour Jerusalem or protect pilgrims." But what could they do P Europe had given up Jerusalem ; and as for pilgrims, their only chance of safety was to go quietly ; an escort of armed knights would have served them ill. That they had become an anachronism no one can deny. It is something to the credit of England that she was content with acquiring the riches of the Order without the abominable cruelties which were practised in France and else- where. The development of the Inns of Court as teaching and administering bodies is lucidly described. And then there is the great store of personal interest. Here the literary • Jesus r Sewn Questions. By J, Warsehauer, M.A., D.Phil. London: Jame. Clarke and Co. [5a. 6d. net.] t Inns of Court. Painted by Gordon Home. Described by Cecil Headlara. London ; A, and C. Black. L7o. Oa. net.]

element may be said to dominate the legal. When we walk through the Temple we think of Johnson, Goldsmith, and Lamb rather than of old-time Chancellors and Chief Justices. All the Inns, present and past, have their due share in Mr. Readlam's narrative. As to the latter, the record is nob to oar credit. Can it have been really right for the members actually la possession to divide the property among themselves P