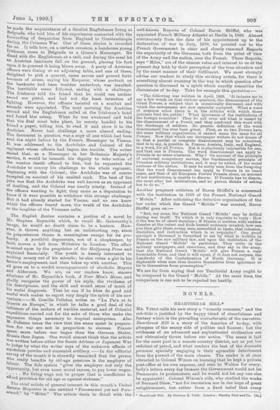 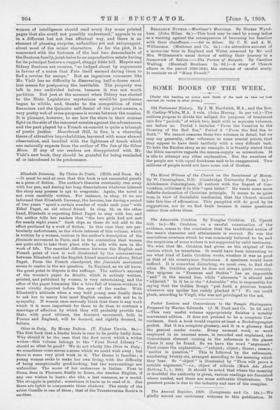 HEARTBREAK HILL.* Ma. VIEL calls his new story a "comedy romance," and the sub-title is justified by the happy blend of cheerfulness and fantasy which is the prevailing characteristic of the narrative. Heartbreak Hill is a story of the America of to-day, with glimpses of the seamy aide of politics and finance ; but the• evidences of an advanced and sophisticated civilisation are not obtrusively thrust before our notice. The scene is laid for the most part in a remote country district, not as yet too redolent of petrol, and what renders the best of the dramatis personae specially engaging is their agreeable detachment from the pursuit of the main chance. The reader is at once attracted to Colonel Wixom on learning that he kept a private post-office at his own expense, and sent to Walton for every- body's letters every day because the Government would not let Democrats be postmasters, and he would not let any one else be appointed! Colonel Wixona's wife, who studied the works of Bernard Shaw, "not for recreation nor in the hope of great enlightenment, but rather from a fixed belief that every * Roartbreak UM. By Herman K. Yield. London: Stanley Paul and Co. [6..] woman of intelligence should read every day some printed pages that she could not possibly understand," appeals to us in a .different but not less effectual way, and there is an element of pleasing surprise, unfamiliar yet not extravagant, about most of the minor charactere. As for the plot, it is concerned with the fortunes of the last two descendants of the Beatoun family,joint-heirs to an unproductive estate having for its principal feature a rugged, shaggy little hill. Mopsie and Sidney Beatoun are cousins, "so hedged about by arguments in favour of a union that Fate itself seemed daring them to find a crevice for escape." But an ingenious romancer like Mr. Viele has no difficulty in discovering half-a-dozen excel- lent means for postponing the inevitable. The property was left in two undivided halves, because it was not worth partition. But just at the moment when Sidney was elected to the State Legislature mysterious would-be purchasers began to nibble, and, thanks to the competition of rival financiers end the Quixotic self-denial of the joint-owners, a 'very pretty web of cross-purposes ie woven between the cousins. It is pleasant, however, to see how the stars in their courses fight on the side of the innocent cousins against the adventurers, and the part played by a French ex-convict is quite a triumph of poetic justice. Heartbreak Hill, in fine, is a charming tissue of attractive improbabilities, leavened with some shrewd observation, and handled with the lightness of touch which one naturally expects from the author of The Inn of the Silver Moon. If any of our readers are dieeppointed with Mr. Viele's new book, they should be grateful for being reminded of or introduced to its predecessor.