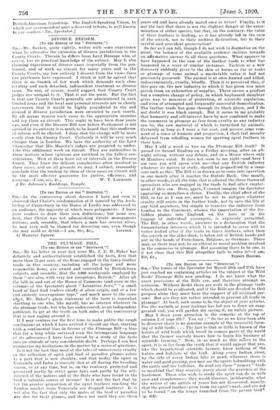 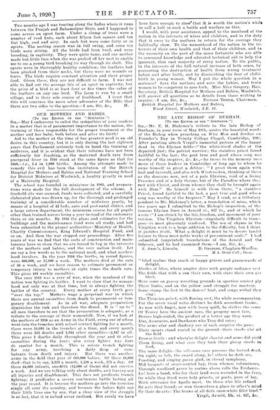 Sia,—The issues of the Spectator for March 20th and 27th have just reached me containing articles on the subject of the Wild • Birds' Plumage Bills now pending. I do not know what the exact provisions of the Bills are, and therefore attempt no criticism. Without doubt there are evils in the plumage trade which should be eradicated, and if the Bills are devoted to that purpose alone they must have the support of all civilized per- sons. But are they not rather intended.to preyent all trade in plumage? At least, such seems to be the object of your articles. For the warmth of your feelings has led you to draw an exag- gerated and, you will pardon my saying it, an unfair picture.

May I draw your attention to the remarks at the top of column 2 of nage 413 ? You say : " So far as we have been able to discover there is no genuine example of the successful farm- ing of wild birds.... The fact is that so little is known of the habits of wild birds which breed in remote parts of the world that the farmer scarcely knows how to begin his business of scientific farming." Now, in as much as this refers to the egret, it is so far from the truth that it would appear that you, like the hypothetical scientific farmer, know nothing of the habits and habitats of the bird. Along every Indian river, by the side of every Indian lake or pond, wherever there is water and good grazing, you may see the egrets hobnobbing with the cattle and the buffaloes. So used are these " remote" birds to mankind that they scarcely worry about the presence of the herdsmen. Those who wish to study the egret can do so with ease and completeness; they would discover, incidentally, what the writer of one article of yours has not discovered, namely, that the prized feathers grow from the egret's neck, and are not to be found " on the wings wrenched from the parent bird (p. 414).

Two months ago I was touring along the Indus where it runs between the Punjab and Bahama1pur State, and I happened to come across an egret farm. Under a clump of trees were a number of reed huts, each about fifteen feet square and ten feet high, cool and airy. In each but were some forty or so egrets. The nesting season was in full swing, and some ten birds were sitting. All the birds had been bred, and were breeding, in captivity. They were quite tame, and one mother made but little fuss when she was pushed off her nest to enable me to see a young bird breaking its way through its shell. The egrets were in thoroughly healthy condition; the feathers had been plucked from their necks, but there were no wounds or tears. The birds require constant attention and their proper food. Given these, they are not difficult to farm. I was not able to find out the average life of an egret in captivity, but the price of a bird is at least four or five times the value of the feathers on any one bird. The farm is run by a small village, and is their sole source of livelihood. I (rust that this will convince the more sober advocates of the Bills that there are two sides to the question.—I am, Sir, &c., H.