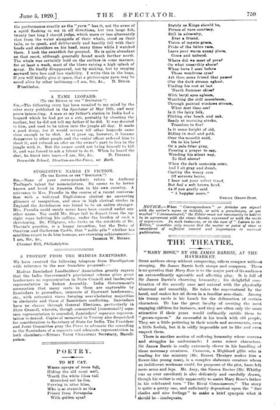 A PROTEST FROM THE MADRAS ZAMINDARS.

Ws have received the following telegram from Masulipatam with reference to the new franchise proposals :-

Madras Zamindari Landholders' Association greatly regrets that the India Government's provisional scheme gives great landowners no representation in State Council and inadequate representation in Indian Assembly. India Government's assumption that many seats in them are capturable by Zamindars is groundless, interests of Ryotwari landowners, etc., with extremist views forming overwhelming majorities in electorate and those of Zamindars conflicting. Zamindars have no chalice through General Elections, particularly in State Council, wherein, though commercial [communal?] sepa- rate representation is conceded, Zamindars' separate represen- tation is denied. Copies of memorial to Viceroy also despatched for consideration to Secretary of State for India. The President and Joint Committee pray (he Press to advocate the conceding to the Zamindars of a separate and adequate representation in both chambers.—Kusiaes RAJAH CHALLAPALLI Secretary,