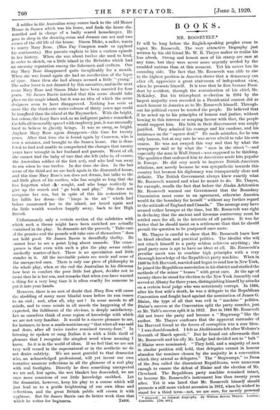 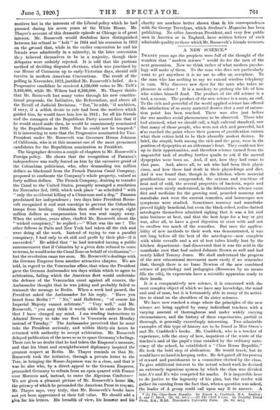 MR. ROOSEVELT.• IT will be long before the English-speaking peoples cease to regret Mr. Roosevelt. The very attractive biography just written by his old friend Mr. W. R. Thayer makes us realise his loss afresh. Strong and honest men of his stamp .are rare at

any time, but they were never more urgently needed by the troubled nations than at this moment. Yet his career has its consoling side. The fact that Mr. Roosevelt was able to rise to the highest position in America shows that a democracy can after ell, appreciate a great statesman of independent view, when he presents himself. It is true that he first became Presi- dent by accident, through the assassination of his chief, Mr. McKinley. But his triumphant re-election in 1904 by the largest majority ever recorded in a Presidential contest did as much honour to America as to Mr. Roosevelt himself. Through. out his political career he trusted the people. He believed that if he acted up to his principles of honour and justice, without bowing to this interest or scraping favour with that, the people would support him. His faith in their discernment was amply justified. They admired his courage and his candour, and his insistence on the " square deal." He made mistakes, for he was only human, but at any rate he was never afraid to take his own course. He was not swayed this way and that by what the newspapers said or by what the " man in the street "—and especially the man in Wall Street—was supposed to be thinking. The qualities that endeared him to Americans made him popular in Europe. He did very much to improve British-American relations, not merely because he was sympathetic towards this country but because his diplomacy was transparently clear and definite. The British Government always knew exactly what Mr. Roosevelt wanted and what he meant to do. Mr. Thayer, for example, recalls the fact that before the Alaska Arbitration Mr. Roosevelt warned our Government that the Boundary Commission must come to an agreement, otherwise America would fix the boundary for herself " without any further regard to the attitude of England and Canada." The message may have seemed rather brusque at the time, but Mr. Roosevelt was right in declaring that the ancient and tiresome controversy must be settled once for all, in the interests of all parties. It was far better that he should insist on a settlement than that he should permit the question to be postponed once more.

Mr. Thayer is careful to show that Mr. Roosevelt knew how to blend idealism and practical politics. The idealist who will not attach himself to a party seldom achieves anything ; the good party-man is apt to have no ideas at all. Mr. Roosevelt's peculiar merit was to combine high principles with a very thorough knowledge of the Republican party machine. When in 1880 he left Harvard, married and began to read law in New York, he joined the Republican association in his district and studied the methods of the minor " bosses " with great care. At the age of twenty-three he stood for election to the New York Assembly and served at Albany for three years, distinguishing himself by attacks on a certain local judge who was notoriously corrupt. In 1884, after his first wife's death, he was a delegate to the Republican Convention and fought hard against the nomination of James G. Blaine, the type of all that was evil in " machine " politics. Blaine's success at the Convention split the party asunder, just as Mr. Taft's success split it in 1912. But in 1884 Mr. Roosevelt did not leave the party and become a " Mugwump " like the author. Mr. Thayer confesses that the apparent surrender of his Harvard friend to the forces of corruption was a sore blow. " I was dumbfounded. I felt as Abolitionists felt after Webster's Seventh of March speech." But he found out afterwards that Mr. Roosevelt and his ally Mr. Lodge had decided not to " bolt " if Blaine were nominated. " They held, and a majority of men in similar position still hold, that delegates cannot in honour abandon the nominee chosen by the majority in a convention which they attend as delegates." The " Mugwurnps," as Dana of the Sun called the dissentient Republicans, were numerous enough to ensure the defeat of Blaine and the election of Mr. Cleveland. The Republican party machine remained intact, to become Mr. Roosevelt's instrument less than twenty years after. Yet it was fated that Mr. Roosevelt himself should promote a still more violent secession in 1912, when he wished to stand for a third term—not, we are sure, for merely personal

motives but in the interests of the Liberal policy which he had pursued during his seven years at the White House. Mr. Thayer's account of this dramatic episode at Chicago is of great interest. Mr. Roosevelt would doubtless have distinguished between his refusal to " bolt " in 1884 and his secession in 1912 on the ,round that, while in the earlier convention he and his friends were admittedly in a minority, in the later convention they believed themselves to be in a majority, though their delegates were unfairly rejected. It is odd that the partisan method of deciding disputed elections, which was practised by our House of Commons up to early-Victorian days, should still survive in modern American Conventions. The result of the polling in November, 1912, justified Mr. Roosevelt's belief. As a Progressive candidate he received 4,126,000 votes to Mr. Taft's 3,483,000, while Mr. Wilson had 6,286,000. Mr. Thayer thinks that Mr. Roosevelt lost many votes through his new constitu- tional proposals, the Initiative, the Referendum, and above all the Recall of Judicial Decisions. " But," he adds, "if ambition, if envy, if a selfish desire to rule had been the motives which guided him, he would have lain low in 1912 ; for all his friends and the managers of the Republican Party assured him that if he would stand aside then, he would be unanimously nominated by the Republicans in 1916. But he could not be tempted." It is interesting to note that the Progressive nominated for Vice- President under Mr. Roosevelt was Governor Hiram Johnson of California, who is at this moment one of the most prominent candidates for the Republican nomination as President.

The biographer devotes a couple of chapters to Mr. Roosevelt's Foreign policy. He shows that the recognition of Panama's independence was really forced on him by the excessive greed of the Colombian politicians, who, after demanding ten million dollars as blackmail from the French Panama Canal Company, proposed to confiscate the Company's whole property, valued at forty million dollars. The French Company, desiring to transfer the Canal to the United States, promptly arranged a resolution for November 3rd, 1903, which took place " as scheduled " with " only the accidental killing of a Chinaman and a dog." Panama proclaimed her independence ; two days later President Roose- velt recognized it and sent warships to prevent the Colombian troops from landing. Colombia then offered to accept eight million dollars as compensation but was sent empty away. When the author, years after, chaffed Mr. Roosevelt about the " wicked conspiracy," he replied :—" What was the use ? The other fellows in Paris and New York had taken all the risk and were doing all the work. Instead of trying to run a parallel conspiracy, I had only to sit still and profit by their plot—if it succeeded." He added that " he had intended issuing a public announcement that if Colombia by a given date refused to come to terms, he would seize the Canal Zone on behalf of civilization"— but the revolution came too soon. Mr. Roosevelt's dealings with the German Emperor form another attractive chapter. We are told, in regard to the Venezuelan affair, that when the President gave the German Ambassador ten days within which to agree to arbitration, failing which the American fleet would undertake the defence of the Venezuelan coast against all corners, the Ambassador thought that he was joking and probably failed to transmit the message to Berlin. When a week had passed, the President asked the Ambassador for his reply. " Have you heard front Berlin ? " " No," said Holleben ; " of course his Imperial Majesty cannot arbitrate." " Very well," said Mr. Roosevelt, you may think it worth while to cable to Berlin that I have changed my mind. I am sending instructions to Admiral Dewey to take our fleet to Venezuela next Monday instead of Tuesday." The Ambassador perceived that he must take the President seriously, and within thirty-six hours he returned with authority to accept arbitration. Mr. Roosevelt delayed publication of the news so as to spare Germany's feelings. There can be no doubt that he had taken the Emperor's measure, and that his blunt and straightforward diplomacy inspired the greatest respect at Berlin. Mr. Thayer reminds us that Mr. Roosevelt took the initiative, through a private letter to the Tsar, in bringing the Russo-Japanese war to a close, and that it was he also who, by a direct appeal to the German Emperor, persuaded Germany to refrain from an open quarrel with France over Morocco and, instead, to enter the Algeciras Conference- We are given a pleasant picture of Mr. Roosevelt's home ilia, the privacy of which he persuaded the American Press to rest eot. Mr. Thayer says, very truly, that Mr. Roosevelt's books have not yet been appreciated at their full value. We should add a plea for his letters. His breadth of view, his humour and his charity are nowhere better shown than in his correspondence with Sir George Trevelyan, which Scribner's Magazine has been publishing. No other American President, and very few public men in America or in England, have written letters of such admirable quality as those which Mr. Roosevelt's friends treasure. .