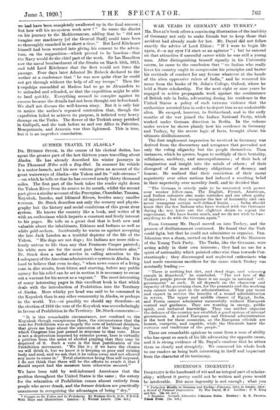 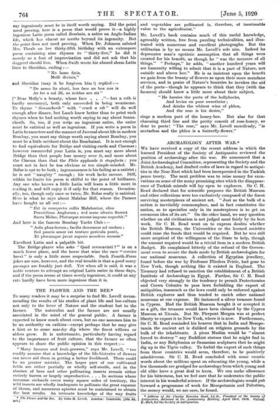 Page 19, 5 June 1920 — INGENUOUS INGENUITY.t Ixoarzurry is the handmaid of wit and an
Close

INGENUOUS INGENUITY.t Ixoarzurry is the handmaid of wit and an

integral part of scholar- ship ; without it poetry could not be written and prose would be intolerable. But mere ingenuity is not enough ; what you

say ingeniously must be in itself worth saying. Did the point need proving, here is a poem that would prove it—a highly ingenious Latin poem called Bombaia, a satire on Anglo-Indian life, which has almost no merits beyond its ingenuity. But the point does not need proving. When Dr. Johnson saluted Mrs. Thrale on her thirty-fifth birthday with an extempore poem containing nine rhymes to " thirty-five," he did it merely as a feat of improvisation and did not ask that his doggerel should live. When Swift wrote his absurd sham-Latin lines to Sheridan, ending :-

" No lasso finis, Molli divinis," and Sheridan (may it be forgiven him !) replied :-

As fer a sal illi, as reddas aro sis "

(" Dear Molly's a beauty, whose face . . ."—but a crib is hardly necessary), both only succeeded in being wearisome. To rhyme " Sennackerib" with " crack a rib " will do well enough after dinner, but Lamb knew better than to print such rhymes when he had nothing worth saying to say about Senna- cherib. So, too, if you write an ingenious satire, the satire must be satirical as well as ingenious. If you write a poem in Latin hexameters and the manner of Juvenal about life in modern Bombay, you must say things worth saying about Bombay, you must be a little mechant about the Bombaiani. It is not enough to find equivalents for Bridge and visiting-cards and Cinemas ; however resourceful your Latin is, you must say more about Bridge than that people lose money over it, and more about the Cinema than that the Plebs applauds it stupefacta ; you must not in fact be too obvious or too simple-minded. Mr. Bolus is apt to be both ; ingenuousness is his failing as a satirist ; he is not " naughty " enough ; his work lacks savour. Still, within its limits his poem is skilful to the point of brilliance. Any one who knows a little Latin will learn a little more in reading it, and will enjoy it if only for that reason. Occasion. ally, too, though only once or twice, Mr. Bolus really is satirical. Here is what he says about Malabar Hill, where the Parsees have bought us all out:—

Excellent Latin and a palpable hit.

The Bridge-player who asks " Quid revocavisti ? " is on a much lower plane, and the horse that wins the race " cervice brevi " is only a little more respectable. Such Fourth-Form jokes are rare, however, and the real trouble is that a good many passages are frankly just dull. Yet when all is said, it was a noble venture to attempt an original Latin satire in these days, and if the poem seems at times merely ingenious, it could at any rate hardly have been more ingenious than it is.