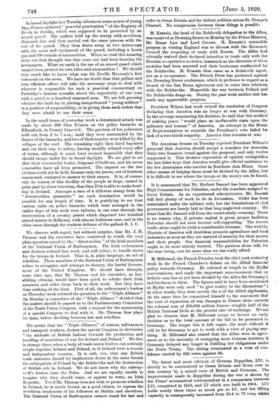 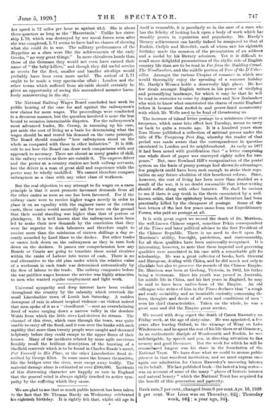 The latest and most efficient of German Zeppelins, L7I, is

shortly to be surrendered to Great Britain and flown over to this country by a mixed crew of British and Germans. The improvement made in Zeppelins during the- war is shown by the Times' aeronautical correspondent in- a comparison between- L71, completed in 1918, and L7 which was built in .1914. L71- holds nearly three times as much gas as L7, and her lifting capacity is consequently increased from 25.4 to 73 tons, whilst

her speed is 72 miles per hour as against 43.5. She is about three-quarters as long as the Mauretania.' Unlike her sister- ship L 70, which was destroyed by our naval forces soon after she was completed, L 71 seems to have had no chance of showing what she could do in war. The military performances of the Zeppelins as a class were like the achievements of the early Greeks, " no very great things." In more chivalrous hands than those of the Germans they would not even have earned their name of " the baby-killers," and though they did useful service as scouts for the fleet, smaller and handier air-ships would probably have been even more useful. The arrival of L 71 ought to be made a very spectacular affair : London and the other towns which suffered from air-raids should certainly be given an opportunity of seeing this surrendered monster harm- lessly manoeuvring in the sky.