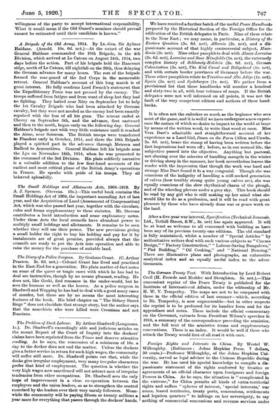 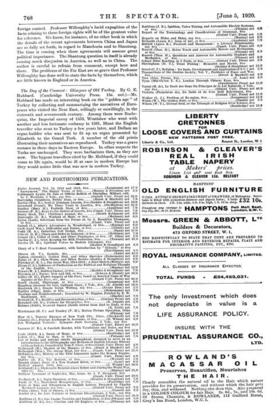 Foreign Rights and Interests in China. By Wostel W. Willoughby.

(Baltimore : Johns Hopkins Press. 7 dollar*, 50 cents.)—Professor Willoughby, of the Johns Hopkins Uni- versity, served as legal adviser to the Chinese Republic during the war. He has used his special knowledge to compile a dis- passionate statement of the rights conferred by treaties or agreements of an official character upon foreigners and foreign Powers in China. As he says, the situation is " complicated in the extreme," for China permits all kinds of extra-territorial rights and suffers " spheres of interest, ' special interests,' war zones, leased territories, treaty ports, concessions, settlements and legation quarters " to infringe on her sovereignty, to say nothing of commercial concessions and revenue services under foreign control. Professor Willoughby's lucid exposition of the facts relating to these foreign rights will be of the greatest value for reference. We know, for instance, of no other book in which the details of the recent agreements between China and Japan are so fully set forth, in regard to Manchuria and to Shantung. The time is coming when these agreements will assume great political importance. The Shantung question in itself is already causing much diseyssion in America, as well as in China. The author is careful to refrain from comment, except here and there. The problems of the Far East are so grave that Professor Willoughby has done well to state the facts by themselves, which are little known in England or in America.