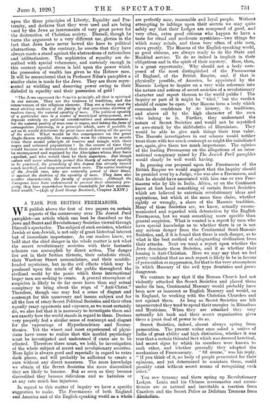 A TASK FOR BRITISH FREEMASONS.

WE publish above the first of two papers on certain aspects of the controversy over The Jewish Peril pamphlet—an article which can best be described as the Jews and Secret and Revolutionary Societies viewed through Disraeli's spectacles. The subject of such societies, whether Jewish or non-Jewish, is not only of great historical interest but of immediate importance. As our readers know, we hold that the chief danger in the whole matter is not what the secret revolutionary societies with their fantastic schemes can accomplish by direct action. The danger lies not in their fustian rhetoric, their cabalistic ritual, their Wardonr Street - nomenclature, and their muddle- headed mysticism, but in• the evil effects which may be produced upon the minds of the public throughout the civilized world by- the panic which these international bogey men are seeking to create. A general atmosphere of suspicion is- likely to .do far more harm than any actual conspiracy to bring about the reign of " Anti-Christ." Therefore, though one may feel a sense of disgust and contempt for this unsavoury and. insane subject and for all the lore of crazy Secret Political Societies and their often equally crazy opponents and exposers, aa we most certainly do, we also feel that it is necessary to investigate them and see exactly how the world stands in regard to them. Doctors very properly feel a similar sense of contempt and disgust for the vapourings of Hypochondriacs and Neuras- thenics. Yet the wisest and most experienced of physi- cians have -come to realize that this morbid psychology must be investigated and understood if cures are to be effected. Therefore there must, we hold, be investigation of the whole subject of secret and revolutionary societies. More light is always good and especially in regard to extra dark places, and will probably be sufficient to create a cure without any direct measures. The more knowledge we obtain of the Secret Societies the more discredited they are likely to become. But as soon as they become discredited they become ridiculous and so harmless or at any rate much less injurious.

In regard to this matter of inquiry we have a specific suggestion to make. The Freemasons of both England and America and of the English-speaking world as a whole are perfectly sane, reasonable and loyal people. Without attempting to infringe upon their secrets we may quite safely say that their Lodges are composed of good, and very often, extra good citizens who happen to have a taste for ritual and moderate mysticism—two things for which many minds, and these very often of able men, crave greatly. The Masons of the English-speaking world, as good citizens, are always ready to do the State and Mankind service. To do so indeed is implicit in their obligations and in the spirit of their mystery. Here, then, is a great opportunity. Why should not a body com- posed of the most distinguished of the Freemasons of England, of the British Empire, and, if that is physically possible, of America, be appointed by the Masonic Lodges to inquire on a very wide reference into the nature and actions of secret societies of a revolutionary character and report thereon to the world publio I The Inquiry or part of it might be " tiled," but the verdict should of course be open. Our Masons form a body which commands confidence by its history, its traditions, and above all by the high character of the men who belong to it. Further, they understand the nature of Secret Societies and would not be mystified or awe-struck by the shibboleths of Illuminism. They would be able to give such things their true value. The. Masonic investigators in our scheme would neither treat them with too much contempt as might the uninitiated nor, again, give them too much importance. The of of the leading Freemasons on the allegations of an Intel- national conspiracy raised by The Jewish Peril pamphlet would clearly be well worth having.

In pressing our proposal upon the Freemasons of the British Empire we would suggest- that the Inquiry should be presided over by a Jude, who was-also a Freemason, and that he should have associated with him one or two Free- masons who by life in India, Africa, or on the Continent know at first hand something of certain Secret Societies which are believed to entertain revolutionary ideas and aspirations, but which at the same time claim, whether rightly or wrongly, a share of the Masonic tradition. Many of these Societies are, we know, actually excom- municated and regarded with detestation by the English Freemasons, but we want something more specific than general suspicion. What is wanted is a report by men who have special knowledge as to whether there is or is not any serious danger from the Continental Semi-Masonic Societies, and, if it is found that there is such danger, as to what is the best method of safeguarding civilization from 'their attacks. Next we want a report upon whether the Jews dominate • these Societies, and if so whether their leaning is Anti-Christian. Here we may say that we feel pretty confident that no such report is likely to be in favour of persecution or suppression, for that is the very atmosphere in which Masonry of the evil type flourishes and grows dangerous.

We venture to say that if the Roman Church had not violently attacked the Secret Societies and placed them under its ban, Continental Masonry would probably have been now as innocent as Engaisishiriasonry and would, se in England, be working with the Christian Churches and not against them. As long as Secret Societies are left unpersecuted they tend to spend their energies in Ritualism and Mysticism. When they are attacked they very naturally hit back and their secret organization gives them a great deal of power to do so.

Secret Societies, indeed, almost always spring from persecution. The present writer once asked a native of India of great ability and high distinction, whether it was true that a certain Oriental Sect which was deemed heretical, had secret signs by which its .members were known to each other, and whether generally they adopted the mechanism of Freemasonry. " Of course," was his reply. " you think of it, no body of people persecuted for their opinions, and yet determined to maintain them, could possibly exist without secret means of recognizing each other."

You sow tyranny and there spring up Revolutionary Lodges. Lenin and his Chinese mercenaries and execu- tioners are as natural and inevitable a reaction from Czardom and the Secret Police as Delirium Tremens from Alcoholism.