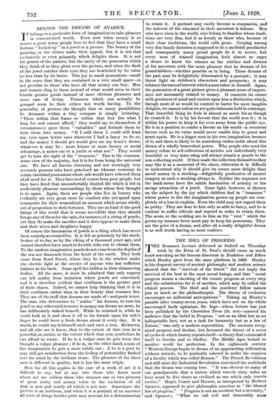 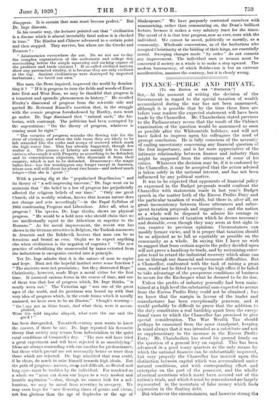 THE IDEA OF PROGRESS.

THE Romanes Lecture delivered at Oxford on Thursday week by the Dean of St. Paul's should cause as much heart-searching as the famous discourse in Evolution and Ethics which Huxley gave from the same platform in 1893. Huxley in his eloquent survey of ancient philosophy and modern science showed that the " survival of the fittest " did not imply the survival of the best in the most moral beings, and that " social progress means a checking of the cosmic progress at every step and the substitution for it of another, which may be called the ethical process. The thief and the murderer follow nature just as much as the philanthropist. The theory of evolution encourages no millennial anticipations." Taking up Huxley's parable after twenty-seven years, which have not on the whole encouraged facile optimism, Dr. Inge—whose lecture has just been published by the Clarendon Press (2s. net)—assured his audience that the belief in Progress, " not as an ideal but as an indisputable fact, not as a task for humanity but as a law of Nature," was only a modern superstition. The ancients recog- nized progress and decline, but favoured the theory of a series of cycles in which history repeats itself—a theory that commended itself to Goethe and to Shelley. The Middle Ages looked to another world for perfection. In the eighteenth century " Western Europe began to dream of an approaching millennium without miracle, to be gradually ushered in under the auspices of a faculty which was called Reason." The French Revolution and still more the Industrial Revolution convinced the multitude that the dream was coming true. " It was obvious to many of our grandparents that a nation which travels sixty miles an hour must be five times as civilized as one which only travels twelve." Hegel, Comte and Darwin, as interpreted by Herbert Spencer, appeared to give philosophic sanction to " the blessed law of progress." " Progress is not an accident but a necessity," said Spencer ; " What we call evil and immorality must

disappear. It is certain that man must become perfect." But Dr. Inge dissents. In his caustic way, the lecturer pointed out that " civilization is a disease which is almost invariably fatal unless it is checked in time." The Hindus and Chinese advanced to a certain point and then stopped. They survive, but where are the Greeks and Romans ? : • " Aristocracies everywhere die out.. Do we not see to-day the complex organization of the ecclesiastic and college don succumbing before the simple squeezing and sucking organs of the profiteer and trade unionist ? If so-called civilized nations show any protracted vitality, it is because they are only civilized at the top. Ancient civilizations were destroyed by imported barbarians ; we breed our own."

Has man, the Dean inquired, improved the world by domina- ting it ? " If it is progress to turn the fields and woods of Essex into East and West Ham, we may be thankful that progress is a transient and sporadic phenomenon in history." He recalled Huxley's disavowal of progress from the scientific side and quoted Mr. Bertrand Russell's assertion that, in the struggle with the cosmic progress foreshadowed by Huxley, man must go under. Dr. Inge dismissed that " natural snob," the his- torian, with contempt. The politician had been corrupted by the superstition: " On the theory of progress, whatever is coming must be right."

" The votaries of progress mistake the flowing tide for the river of eternity, and when the tide turns they are likely to be left stranded like the corks and scraps of seaweed which mark the high-water line. This has already happened, though few realize it. The praises of Liberty are mainly left to Conser- vatives, who couple it with Property as something to be defended, and to conscientious objectors, who dissociate it from their country, which is not to be defended. Democracy—the magic ballot-box—has few worshippers any longer except in America, where men will still shout for about two hours—and indeed much longer—that she is great '."

With a passing dig at the " popularized Hegelianism " and its theory of " a self-improving universe," Dr. Inge went on to maintain that " the belief in a law of progress has prejudicially affected the religious beliefs of our time." " Only one great Church, old in worldly wisdom, knows that human nature does not change and acts accordingly"—in the Papal Syllabus of 1864 condemning Progress and Liberalism. After all, what is progress ? The species, Dr. Ingo thinks, shows no physical progress. " He would be a bold man who should claim that we are intellectually equal to the Athenians or superior to the Romans." As for moral improvement, the recent war has shown in the German atrocities in Belgium, the Turkish massacres in Armenia and the Bolshevik horrors that man can be as ferocious and brutal as ever. Ought we to expect anything else when civilization is the negation of eugenics ? " The new practice of subsidizing the unsuccessful by taxes extorted from the industrious is cacogenics erected into a principle.

Yet Dr. Inge admits that it is the nature of man to aspire and hope. Must not the hopeful instinct serve some function ? " The ancients were not pessimists ; but they distrusted Hope." Christianity, however, made Hope a moral virtue for the first time. It assumed various forms in the course of time, and one of them was that law of progress which, Dr. Inge thinks, " is nearly worn out." The Victorian age " was one of the great ages of the world, and its greatness was bound up with that very idea of progress which, in the crude forms which it usually assumed, we have seen to be an illusion." Clough's warning- " Go ! say not in thine heart, And what then, were it accom- plished, Were the wild impulse allayed, what were the use and the geed ? "

has been disregarded. Twentieth-century man wants to know the answer, if there be one. Dr. Inge repeated his favourite theory that society may return from industrialism to the quiet rural conditions of Cromwell's day. " The race will have tried a great experiment and will have rejected it as unsatisfying." Ideas are always contending with one another for predominance, but those which prevail are not necessarily better or truer than those which are rejected. Dr. Inge admitted that man could, if he chose, do much to raise himself towards high ideals. But the path of progress—narrow, steep and difficult, as Hesiod said long ago—must be trodden by the individual. For mankind as a whole we " must cut down our hopes to a very modest and humble aspiration "—that, though we cannot look for a mil- lennium, we may be saved from reverting to savagery. We may even hope for "new flowering times of genius and virtue, not less glorious than the age of Sophocles or the age of Shakespeare." We have purposely contented ourselves with summarizing, rather than commenting on, the Dean's brilliant lecture, because it makes a very salutary tract for the times. The moral of it is that true progress, now as ever, rests with the individual. We cannot be saved, politically or morally, as a community. Wholesale conversions, as of the barbarians who accepted Christianity at the bidding of their kings, are essentially unreal. Sweeping changes made " by order " do not connote any improvement. The individual man or women must be converted if society as a whole is to make a step upward. The modern bureaucracy, of which Bolshevism is but an extreme manifestation, assumes the contrary, but it is clearly wrong.