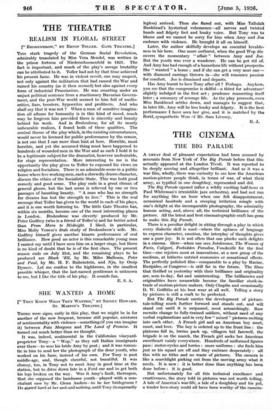 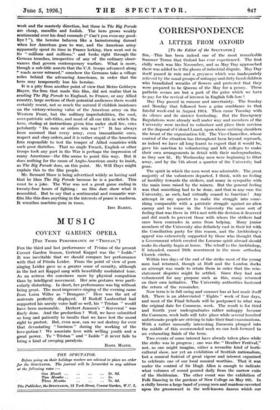 THE CINEMA THE BIG PARADE A GREAT deal of pleasant

expectation had been aroused by accounts from New York of The Big Parade before that film actually appeared at the London Tivoli. It was reported to be deeply moving and altogether brilliant. And as it was a war film, wholly, there was curiosity to see how the American motion-picture people think, in terms of war, of what their army, as typified in one doughboy, represented and did.

The Big Parade opened (after a wildly exciting half-hour oI Paul Whiteman's irresistible jazz orchestra), and had not run for anything like an hour when one felt disappointment, occasional lassitude and a creeping irritation mingle with one's delight at the incomparable photography, the admirably human acting, and, above all, the technical brilliance of the picture. All the latest and best cinematographic craft has gone to make this Big Parade.

There is a peculiar delight in sitting through a play in which every dialectic skill is used—where the aptness of language to express character, emotion, the interplay of thoughts gives one a pure joy. It is not often that one plucks such delights in a cinema. Here—when one sees Intolerance, The Woman of Paris, Caligari, Forbidden Paradise, Vaudeville for the first time—one rejoices most at innovations, at a new grasp of the medium, at hitherto untried economies or sensational effects. The perfectly polished film—comparable to a play by Racine, Euripides, or Congreve—is still far in the future. The films that thrilled us yesterday with their brilliance and originality are, seen to-day, fiat and uninteresting. The brilliancies and originalities have meanwhile become the familiar stock-in- trade of motion-picture makers. Only Chaplin and occasionally D. W. Griffiths at his best wear at all well. Telling a story by pictures is still a craft to be perfected.

But The Big Parade carries the development of picture- tale-telling much further forward and stands out, and will stand out until it is surpassed, most astonishingly. Raw recruits change to fully-trained soldiers,, without need of. any verbal explanations and in very few " mixed pictures melting into each other. A French girl and an American boy meet, court, and love. The boy is ordered up to the front line : the platoons fall in, lorries pack up, villagers bid farewell, the brigade is on the march, the French girl seeks her American sweetheart vainly everywhere. Hundreds of uniformed figures pass : motor-cycles and lorries : more uniforms : she finds him just as his squad are off and they embrace desperately : all this with no titles and no waste of pictures. The camera is like a searchlight picking out from the moving army what it needs. It is new : it is better done than anything has been done before : it is good.

But unfortunately for all this technical excellence and creativeness, the story told in pictures was not worth telling. A tale of America's war-life, a tale of a doughboy and his pal, a tender love-story could all have been worthy of the camera- work and the masterly direction, but these in The Big Parade are cheap, maudlin and foolish. The hero grows weakly sentimental over his dead comrade (" Can't you even say good- bye "), the heroine behaves like a barnstorming damsel when her American goes to war, and the American army apparently spent its time in France larking, then went out in its " millions and millions," and broke right through the German trenches, irrespective of any of the ordinary obser- vances that govern contemporary warfare. What is more, though a sub-title asserts that the U.S. troops advanced along roads never retraced," somehow the Germans take a village miles behind the advancing Americans, in order that the hero may temporarily lose his heroine.

It is a pity from another point of view that Metro Goldwyn Mayer, the firm that made this film, did not realize that in sending The Big Parade to England, to France, or any Allied country, large sections of their potential audiences there would certainly resent, not so much the natural if childish insistence on the victory-winning value of the American army on the Western Front, but the military improbabilities, the cool, over-patriotic sub-titles, and most of all one title in which the hero, chafing at instructions given him under shell fire, cries petulantly " Do men or orders win war ? " It has always been assumed that every army, even transatlantic ones, respect and obey orders, and it is rather stupid of the American firm responsible to test the temper of Allied countries with such poor diatribes. That no single French, English or other troops took any part in the War is perhaps the impression of many Americans—the film seems to point this way. But it does nothing for the cause of Anglo-American amity to insist, as The Big Parade does, on this point. Mr. Will Hays might explain this to the film people.

Mr. Bernard Shaw is being advertised widely as having said that he likes The Big Parade because he is a pacifist. This must be a joke. The War was not a great game ending in twenty-four hours of fighting : no film dare show what it resembled. But to say that a sentimental and romantic war- film like this does anything in the interests of peace is madness. It wreathes machine-guns in roses.