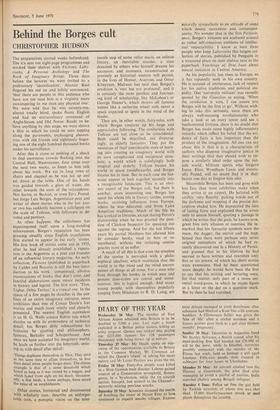 DIARY OF THE YEAR

Wednesday 26 May: The number of East African Asians admitted into Britain is to be doubled to 3,000 a year. Last night a bomb exploded in a Belfast police station, killing an army sergeant. Qantas was tricked into paying out £233.000 ransom for 128 passengers threatened with being blown up in mid-air.

Thursday 27 May: Mr Heath spoke on tele- vision of the opportunities available to Britain in the Common Market, Mr Crossman ad- mired the Queen's 'cheek' in asking for more money and Mr Lester Pearson was given the oss. Friday 28 May: Forty-five people were killed in a West German train disaster. Labour gained control of a Conservative stronghold, Broms- grove, in a by-election, while the us aircraft carrier, Intrepid, lost control in the Channel— narrowly missing previous wrecks.

Saturday 29 May: Scientists disputed the merits of bombing the crater of Mount Etna as lava continued to imperil nearby villages. Express train drivers managed to avert derailment after saboteurs had blocked a Kent line with concrete boulders. A Glamorgan fielder was given the 'kiss of life' after a cricket accident and a Sussex woman gave birth to a girl after thirteen months' pregnancy.

Sunday 30 May: Terrorists in Argentina freed Mr Stanley Sylvester, a British consul. after his meat-packing firm had handed out £26.000 of aid to the poor. while in Istanbul, terrorists possibly connected with the murder of Mr Elrom last week, held as hostage a girl aged fourteen. Fifty-two people were trapped in cablecars for four hours in Llandudno.

Monday 31 May: An aircraft crashed into the Thames at Greenwich; the pilot died after managing to avoid a pierful of tourists. India reported cholera among Bengali refugees. Tuesday 1 June: Police set free the girl held by Turkish terrorists of whom one was shot dead. 15,000 blastfurnacemen struck at steel plants throughout the 'country.