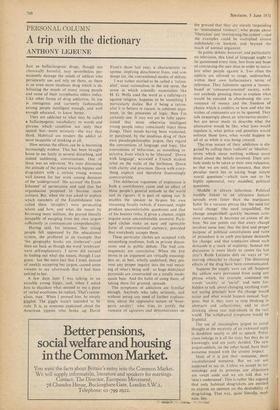 A trip with the dictionary

Just as hallucinogenic drugs, though not chemically harmful, may nevertheless per- manently damage the minds of addicts who persistently use and rely on them, so there is an even more insidious drug which is de- bilitating the minds of many young people and some of their sycophantic elders today. Like other forms of drug addiction, its use is contagious and currently fashionable, among people intelligent enough, and well enough educated, to know better.

They are addicted to what may be called a hallucinogenic vocabulary; to words and phrases which condition not only their speech but—more seriously—the way they think. Habitual use renders the addict al- most incapable of thinking at all.

How serious the effects can be is becoming increasingly evident. This has been brought home to me lately in several disturbing, and indeed saddening, conversations. One of these was on television. We were discussing the attitude of the police towards hippies and drug-takers with a certain young woman well known for her work among denizens of the 'underground'. She accused 'the Estab- lishment' of persecution and said that her organisation proposed to become more militant. But, when she was asked to explain which members of the Establishment (she called them 'straights') were persecuting whom and how, and what she meant by becoming more militant, she proved literally incapable of escaping from her own jargon sufficiently to communicate comprehensibly.

Having said, for instance, that young people felt oppressed by the educational system, she proffered as an example that 'the geography books are irrelevant'--and then sat back as though the word 'irrelevant' were self-explanatory. I never did succeed in finding out what she meant, though 1 can guess : but the mere fact that I tried, instead of meekly accepting her jargon, caused some viewers to say afterwards that I had been unkind to her.

A few days later I was talking to an amiable young hippy, and, when I asked him to elucidate what seemed to me a piece of verbal woolliness, he replied, 'That's ration- alism, man.' When 1 pressed him, he simply giggled. The giggle wasn't intended to be rude. It is, as someone explained about the American yippies who broke up David Frost's show last year, a characteristic re- sponse, implying detachment from, and con- tempt for, the conventional modes of debate.

I was rather startled to be called a 'ration- alist', since rationalism in the old sense, the sense in which scientific materialists like H. G. Wells used the word as a rallying-cry against religion, happens to be something I particularly dislike. But if being a ration- alist it to believe in reason, in coherent argu- ment, in the processes of logic, then I'm certainly one. It may not yet be fully appre- ciated that some otherwise intelligent young people today consciously reject these things. Their minds having been weakened, or paralysed, by the insidious drug of their own pseudo-philosophic jargon, they regard the conventions of language and logic, like conventions of behaviour, as something re- strictive, from which to be 'liberated'. 'Down with language', scrawled a French student rebel on the walls of the Sorbonne. Down with clarity and precision. Down with every- thing explicit and therefore frustratingly controvertible.

This deliberate vagueness of expression is both a contributory cause and an effect of these people's general attitude to the world and its rigours. It is part of opting out. It enables the speaker to by-pass his own reasoning faculty (which, if exercised, might produce uncomfortable questions) and that of his hearers (who, if given a chance, might require some uncomfortable answers). Pack- aged clichés make an easy and agreeable form of conversational currency, provided that everybody accepts them.

These particular clichés are accepted with, astonishing readiness, both in private discus- sions and in public debate. The bad con- sequences are cumulative. When the key terms in an argument are virtually meaning- less or, at best, wholly undefined, they pre- vent any proper inquiry into the real mean- ing of what's being said : so huge dialectical pyramids are constructed on a totally inade- quate base. And the habit of using them, of taking them for granted, spreads.

The symptoms of addiction are familiar enough. Anybody who talks seriously, and without seeing any need of further explana- tion, about the oppressive nature of 'bour- geois society'; who tries to justify the violence of agitators and demonstrators on

the ground that they are merely responding to 'institutional violence; who prates about

'liberation' and 'overturning the system'—and the examples could be multiplied almost indefinitely—is hooked, and beyond the reach of normal argument.

In public debate, however, and particularly on television, this kind of language ought to be questioned every time, less from any hope of convincing the user than in order to inocu- late other people against it. Too often the addicts are allowed to range, undisturbed, within their own hallucinatory terms of reference. They fulminate against a 'money- based' or 'consumer-oriented' society, with- out anybody pressing them to explain what would be entailed in abandoning the con- venience of money and the freedom of choice which it confers, or how and why the wishes of consumers are to be ignored. They talk sweepingly about an 'alternative society', but are never made to describe what the alternative would be like, what laws would regulate it, what police and penalties would enforce those laws, what would happen to all of us while it was being created.

The .true nature of their addiction is dis- guised by calling them 'radicals' or 'idealists', terms which mean nothing without some detail about the beliefs involved. Their atti- tude tends to be taken at their own valuation, so that we are told, for instance, that their peculiar merit lies in asking 'huge simple moral questions'—which turn out to Le highly ephemeral, very muddled, political questions.

Muddle is always infectious. Political muddle linked to an attractive fantasy spreads even faster than the marijuana habit. So a vacuous phrase like 'the need for social change', (the need unqualified, the change unspecified) quickly becomes com- mon currency. It becomes an axiom of de- bate. No one points out that every change involves some loss; that the first and proper purpose of political constitutions and rules of procedure is to curb precipitate demands for change; and that scepticism about such demands is a mark of maturity. Instead the discussion is more likely to centre (as last year's Reith Lectures did) on ways of 're- moving obstacles to change'. The distorting effects of the drug have been communicated.

Suppose the supply were cut off. Suppose the addicts were prevented from using any phrase which, for example, contained the words 'society' or 'social', and were for- bidden to talk about changing anything with- out saying precisely how the change would occur and what would happen instead. Sup- pose, that is, they were to stop thinking in • abstracts and collectivities, and to start thinking about real individuals in the real world. The withdrawal symptoms would be frightful. The use of meaningless jargon to avoid thought or the necessity of an awkward reply is doubtless nearly as old as speech. Politi- cians indulge in it all the time; but they do so knowingly, and are justly derided. The new jargon-addicts, on the other hand, have their nonsense treated with the utmost respect.

Most of it is just that—nonsense, sheer unadulterated nonsense. But we are not supposed to say so. Unless we accept its ter- minology and its premises our objections are swept aside and we are told that we 'don't understand'. This is rather like arguing that only habitual drug-takers are entitled to express an opinion on the desirability of drug-taking. That way, quite literally, mad- ness lies.