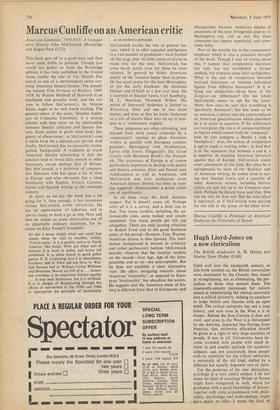 Marcus Cunliffe on an American critic

This book gets off to a good start and then never quite fulfils its promise. Though you would not gather so from the Routledge edition, it has been published in the United States (under the title of The Middle Dis- tance) as one of a chronological series cov- ering American literary history. The preced- ing volume (The Ferment of Realism, 1884- 1919, by Warner Berthoff of Harvard) is an intelligent and graceful work, and the vol- ume to follow McCormick's, by Marcus Klein, ought to be well worth reading. The general editor of the series, Quentin Ander- son of Columbia University, is a serious scholar with firm views on the relationship between literary criticism and literary his- tory. Each author is given what looks like plenty of elbow-room : in McCormick's case a whole book for a thirteen-year period. And finally, McCormick has an unusually cosmo- politan background. A weakness of much American literary scholarship is that the scholars tend to reveal little interest in other literatures, except perhaps that of Britain. But McCormick is a professor of compara- tive literature who has spent a lot of time in Europe and who obviously has a close familiarity with English, French, German, Italian and Spanish writing in the twentieth century.

In short, as we say, the book has a lot going for it. Sure enough, it has numerous virtues. McCormick writes attractively. He has an appreciation of aphorism and is always ready to have a go at one. Now and then he makes an acute observation out of an apparently ordinary statement, for in- stance on Ezra Pound's 'craziness': '

By this I mean simply what one small boy means when he says to another, mildly, `You're crazy.' it is a quality native to North America, like maize. With any other sort of humour it is hard to define and better left undefined. It is often found in good poker games. E. E. Cummings had it in abundance; Faulkner had it; Eliot did not have it; Wal- lace Stevens had it; William Carlos Williams and Marianne Moore arc full of it ... Ameri- can craziness is an important literary quality

. It may look barbarous, but it is civilised. It is in danger of disappearing through the efforts of non-writers in the 1950s and 1960s to appropriate the principle of spontaneity as an exclusive principle.

McCormick avoids the vice of general sur- veys, which is to offer capsuled indulgences to a vast number of graduands--each hustled off the stage after his little ration of praise to make way for the next. McCormick has some harsh words even for those he most admires. In general he thinks American poetry of the 'twenties better than its prose. He has scant praise for the later Hemingway or for the early Faulkner. He dismisses Dreiser and O'Neill in a few curt lines. He is scornful of Sinclair Lewis, Carl Sandburg, H. L. Mencken, Thornton Wilder. His praise of Sherwood Anderson is limited to Winesburg, Ohio and one or two short stories, and even at that he treats Anderson as a sort of sincere faker who set up in busi- ness as a `midwestern original.'

These judgments are often refreshing, and rescued from mere casual contempt by a comparatist's attempt to place American writers in parallel with European contem- poraries : Hemingway with Montherlant, Lewis with Svevo, Fitzgerald's The Great Gatsby with Hermann Broch's Die Roman- tik. The awareness of Europe is of course particularly important in dealing with poetry and literary criticism. Eliot and Pound were world-citizens as well as Americans, and McCormick sees how inadequate some American literary history has been in mak- ing supposed 'Americanness' a prime criter- ion of significance.

In all these ways his book deserves respect. Yet it doesn't come off. Perhaps after all it is a survey, and a brief one at that. Too many verdicts, including the un- favourable ones, seem rushed and unsub- stantiated. Too many people get left out altogether. There are only passing allusions to Robert Frost and to the good Southern poets of the period—Ransom, Tate, Warren. American drama is also ignored. The intel- lectual background is treated in arbitrary and rather perfunctory fashion. McCormick sensibly observes that the familiar verdicts on the decade—Jazz Age, Age of the Irres- ponsibles and so on—are unacceptable. But he does not establish a clear alternative view. He offers intriguing remarks about American 'rationality', as opposed to Euro- pean 'irrationality', but abandons the notion. He suggests that the American sense of his- tory is different from that of Europeans, and distinguishes between American shades of awareness of the past (Fitzgerald open to it, Hemingway not, and so on). But these comments too appear superficial, and some- times fishy.

Part of the trouble lies in the comparative emphasis which is also a potential strength of the book. Though I may be wrong about this, I suspect that comparative literature not only has not established a proper method, but contains some fatal ambiguities. What is the aim of comparison between national literatures, or between individual figures from different literatures? Is it to bring out similarities—those born of the Zeitgeist—or differences? On the whole McCormick seems to opt for the latter. More than once he says that something is 'peculiarly American'; but this tends to be an assertion, a retreat into the commonplaces of American generalisation which elsewhere he is at pains to question. If the differences are very great, 016 risk is of comparing things or figures which cannot truly be 'compared' : how do you compare a Model T. with a Modigliani? Also, the notion of comparison is apt to imply a ranking order : to lead that is to the statement that between A and B, A is superior. In standing American literature against that of Europe, McCormick resists overt assessment of this kind. But since he is unimpressed by most of the 'Redskin' side of American writing, he comes close to say- ing that Sinclair Lewis and a quantity of other American writers, including literary critics, are just not up to the European stan- dard. Perhaps he should have said that. One can see why he does not. But the total effect is equivocal, as if McCormick were playing for one side in the jersey of the other team.