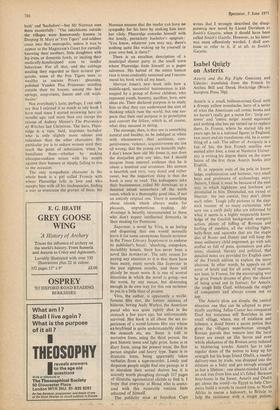 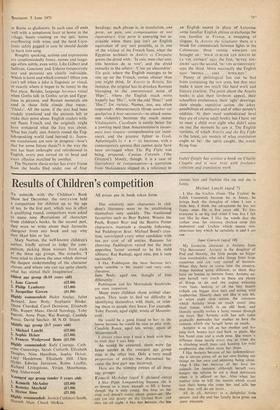 Asterix is a small, bulbous-nosed Gaul with a droopy yellow moustache, hero of a series of what the Americans call comic books and we haven't really got a name for : 'strip car- toons' and 'comic strips' sound equivocal and nothing else has yet turned up to replace them. In France, where he started life ten years ago, he is a national figure; in England, two years and six translations old, he is some- thing of a cult. The editor of Antiquity is a fan of his; the first French satellite was named after him; a man at Nanterre Univer- sity is writing his degree thesis on the trans- lation of the first three Asterix books into English.

If, at opposite ends of the pole in know- ledge, sophistication and humour, very small boys and professors of archaeology enjoy Asterix, I think it must be because of the neat way in which highbrow and lowbrow are dovetailed in him. Dovetailed, not mixed or blurred : the two coexist, they don't dilute each other. Tough jolly pictures in the slap- stick manner of so many cartoonists who turn out a swift daily joke are informed by what it seems is a highly respectable know- ledge of the Gaulish background; energetic action, plenty of buffing of Romans and hurling of menhirs, all the whirling fights, belly-flops and squawks that are the staple diet of Beano and Dandy and will keep the most unliterary child engrossed, go with talk stuffed so full of puns, quotations and allu- sions, classical, literary and political, that detailed notes are provided for English users of the French edition to explain the more abstruse. In other words, he appeals on all sorts of levels and for all sorts of reasons, not least, in France, for the encouraging way he gives French dreams of glory the chance of being acted out in fantasy; for Asterix, the tough little Gaul. withstands the might of conquerors and always comes out on top.

The Asterix plots are simple, the central situation one that can be adapted to prac- tically anything. Julius Caesar has conquered Gaul but resistance still flourishes in one small village, where, out of mistletoe and lobsters, a druid brews a secret potion that gives the villagers superhuman strength. Roman patrols that venture into the local forest are swept up like leaves and even whole phalanxes of the Roman army reduced to blubbering wrecks. Asterix has to take regular doses of the potion to keep up his strength but his huge friend Obelix, a menhir delivery-man by trade, was dropped into the mixture as a baby and got enough strength to last a lifetime : one absent-minded kick at an oak tree from him and it's felled. Between boar-hunts in the forest. Asterix and Obelix get about the world—to Egypt to help Cleo- patra build a temple in record time, to North Africa to rescue a legionary, to Britain to help the resistance with a magic potion,

to Rome as gladiators. In each case all ends well with a sumptuous feast at home in the village, boars roasting on the spit, horns overflowing with wine, and the bard Caco- fonix safely gagged in case he should decide to burst into song.

Roughly speaking, actions and expressions are simplemindedly funny, names and langu- age often subtle, even witty. Like Gilbert and Sullivan. Goscinny and Uderzo (respectively text and pictures) are clearly indivisible. Which is form and which content? Often you can't tell when a joke is linguistic or visual, or exactly where it began to be funny in the first place. Besides, language becomes visual when Goths talk in Gothic script and Egyp- tians in pictures, and Roman numerals are used in those little clouds that mean : 'Thinks'. All the same, if the text had been crudely translated and the pictures left to make their point alone. English readers with- out fluent French and the originals might have wondered what the fuss was about. What has really sent Asterix round the Eng- lish-speaking world (and beyond it Japan- ese translations are now in progress—how's that for some future thesis?) is the way the text has been rethought and refashioned in English. every pun turned on its head and every allusion matched by another.

headings; each phrase is, in translation, line perte, an gain, tale coinpensation or ante equivalence. Une perte is annoying but in- evitable when there just isn't an English equivalent of any sort possible, as in one of the wittiest of the French lines, when the Egyptian architect in Asterix et Cleopatre greets the druid with : suis, mon cher ami, tres heureux de to voir'. and the druid remarks to the others: 'C'est un alexandrin'. Un gain, where the English manages to be one up on the French, comes oftener than you might think. In Asterix in Britain. for instance, the original has its drunken Romans hiccuping to the conventional noise of 'Hips!', where the English much more happily has 'Hie'', with the odd 'Hue!' and 'Hoc!' for variety. Names, too. are often improved : Abraracourcix (from somber cur qtrelqiettit h bras raccourcis—to attack some- one violently) becomes the much neater Vitalstatistix, Cacofonix is surely better for a yowling bard than Assurancetourix (assur- ance tolls Humes—comprehensive car insur- ance). and the greatest fighter in Gaul. Aplusbegalix (A 4- a = x). becomes, with a contemporary aptness that cannot quite have been envisaged when The Big Fight was being prepared. Cassius Ceramix ('the Greatest). Mostly, though, it is a case of equivalence or compensation—a quotation from Shakespeare slipped in, a reference to an English source in place of Larousse, some familiar English phrase in exchange for one familiar in France, a swapping of slogans. In Asterix the Gladiator there is a break for commercials between fights in the Colosseum; three outsize wine-jars are brought on : 'POUR OUBLIER LES SOUCIS DE LA VIE ANTIQUE' says the first, 'BUVEZ TOU- 3OURS' says the second, "DU VIN AUTLIENTIQUE. says the third. More succinctly the English says: 'DRINKA . . . JARA . . W1NA DAY.'

Plenty of philological fun can be had from comparing the two texts, but that may make it seem too much like hard work and literary exertion. The point about the Asterix books is also their lowbrow appeal, their schoolboy exuberance, their 'ugly' drawings, their simple. repetitive action, the jokey possibilities of antiquity and of other people's oddities. At their most sophisticated level they are of course adult hooks, but I have yet to meet a child over eight who didn't seize on one the moment he saw it. The English versions, of which Asterix and the Big Fight is the latest, are models of what,translation ought to be: the spirit caught, the: words flying free.