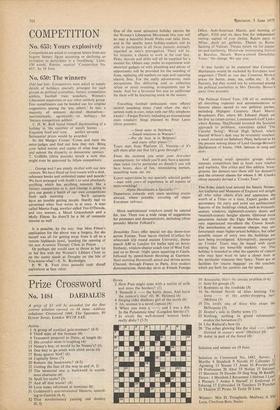 Odd bod holy: Competitors were asked to supply details of holidays specially arranged for such groups as political journalists, literary competition addicts, football train smashers. Women's Liberation supporters or any other unlikely group. Few compliments can be handed out for original suggestions among the 'any others.' In fact, a majority of entrants devoted themselves— narcissistically. egoistically—to holidays for 'literary competition addicts.'

C. H. W. Roll found himself daydreaming of a holiday in 'the stateliest of stately homes . . . Exquisite food and wine . . perfect servants . . . Substantial prizes would be awarded.'

So did Margot Crosse: 'Come and meet the setter/judges and find out how they tick. Bring your failed entries and copies of what beat you and submit the disparity to democratic opinion.' T. Griffiths (three pounds) struck a note that might even be approved by fellow competitors: ... George and I are simply thrilled with our new venture. We have fitted up four rooms with a desk, reference books and unlimited paper and pencils! We have arranged with Smith's to send absolutely anything which has anything remotely like a literary competition in it, and George is going to give our guests a batch of our own competitions fresh each morning . . . We'll certainly have no trouble getting people. Hardly had we advertised when four wrote in at once. A man called Martin Fagg, another called Tim O'Dowda, and two women, a Maud Gracechurch and a Molly Fitton. So there'll be a bit of romantic interest as well . . .

• • - It is possible, by the way. that Miss Fitton's application for the above was a forgery, for she herself was all for getting away from it all to a remote highlands hotel, 'pending the opening of the new Aversion Therapy Clinic in Pinner . . . '

Or perhaps she would care to throw in her lot or her bra with the Women's Libbers ('Join us on the sunny sands at Douglas on the Isle of You-know-what'—S. N. Burbridge).

P. W. R. Foot (two pounds) took distaff aspirations at face value: One of the most attractive holiday centres for the Women's Liberation Movement this year will be near a beautiful South Wales coal field. Here, and in the nearby town holiday-makers will be able to participate in all those pursuits normally regarded as men's prerogatives. There will be, for instance, a chance to work at the coal face. Picks, shovels and drills will all be supplied for a modest fee. Others may prefer to experiment with electrical gadgets or with plumbing and plenty of opportunity will be provided for the mending of fuses, replacing old washers on taps and repairing electric fires. For the really adventurous, male occupations like delivering coal or collecting refuse or street sweeping, arrangements can be made. And for a favoured few and an additional fee there will be fascinating work in the sewers.

Travelling football enthusiasts were offered several smashing times ('and when the day's serious work is over, relax with our fifty telephone kiosks'—Fergus Porter), including an international train wreckers' binge planned by Peter Lewis (three pounds): —Slash seats in Salzburg!

—Put tire boot in in Belgium!

and many other places!!!

Tours start from Platform 12, Victoria—if it's still there after our first lot's gone through ! I From the moment you enter your first-class compartment, for which you'll only have a second- class ticket (we're particular on details!) you will have hours, days of fun, intimidating porters, assaulting nuns. etc. etc.

Expert supervision by our specially selected guides —men with years of experience in all aspects of train-wrecking !

More sophisticated wreckers could be catered for, too. There was a wide range of suggestions for protesters and demonstrators, including (three pounds) Martin Folkard's: Demoliday Tours offer special ten day demo-tour across Europe. Tour leaves Oxford (Carfax) for whitewash trip round ancient University, thence march A40 to London for leaflet raid on Soviet Embassy, window-shatter coach tour of West End, and on to Dover. Night spent squatting in Castle. followed by petrol-bomb throwing at Garrison. Next morning Hovercraft seized and driven across Channel, through France to Paris. Join student demonstration, three-day sit-in at French Foreign

It was hardly to be expected that Common Marketeers would be excluded by European tour organisers ('Thrill as you pay Common Market prices for butter, meat, tea, coffee etc.'- E. 0. Parrott), but they would not be welcomed among the political journalists in Mrs Dorothy Brown's party (two pounds): The Political Grand Tour, £50 all in, embraces all travelling expenses and accommodation to historic places sacred to our political parties. including Highgate Cemetery (Karl Marx): Broadstairs Pier, where Mr Edward Heath ale his first ice cream cornet; Lossiemouth Golf Links. where Ramsay MacDonald invented the Socialist approach to problems, sometimes called 'The Circular Swing'; Wirral High School. where Harold Wilson's desk may be reverently touched: a small pyramid on Salisbury Plain, believed to he the present resting place of Lord George-Brown's Declaration of Intent. 1964, famous in song and story And among small specialist groups whose interests competitors had at heart were witches and warlocks. film critics and film addicts bride- grooms, fan dancers (are there still fan dancers?) and the criminal classes for whom J. M. Crooks (three pounds) devised a 'Crooks Tour': This 8-day coach tour around the Stately Homes. Art Galleries and Museums of England will delight all who value objets d'art and appreciate the worth of a Titian or a tiara. Expert guides will accompany the party and point out architectural features of the buildings visited, such as sixteenth- 4entury windows, eighteenth-century doors and twentieth-century burglar alarms. Optional extra excursions include the Elgin Marbles and (for very experienced travellers) the Crown Jewels. The introduction of museum charges may un- fortunately mean higher-priced holidays, but other possible means of entry into the buildings are now being investigated. Alternatively, passengers on Crooks' Tours may be issued with cards stating they are bona-fide students. Na: This holiday is intended to whet the appetite of visitors who may later want to take a closer look at the particular treasures they fancy. There are no facilities for 'excess baggage' on the coaches, which are built for comfort not for speed.